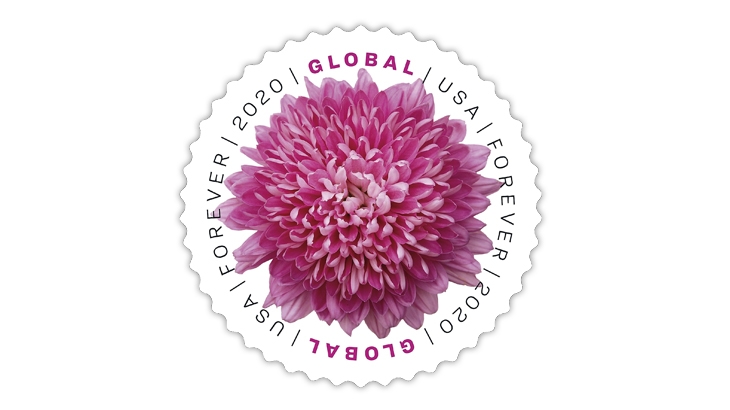 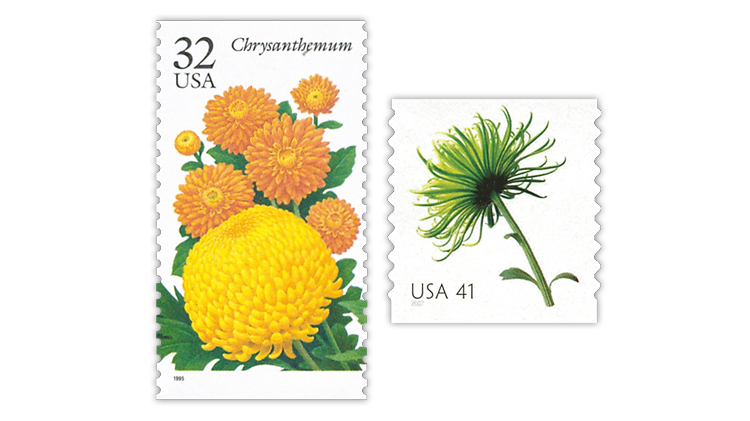 Two earlier U.S. stamps depicting chrysanthemums show very different views of the flower. The 32¢ stamp is from the 1995 Garden Flowers set, and the 41¢ coil is from the 2007 Beautiful Blooms definitive set. 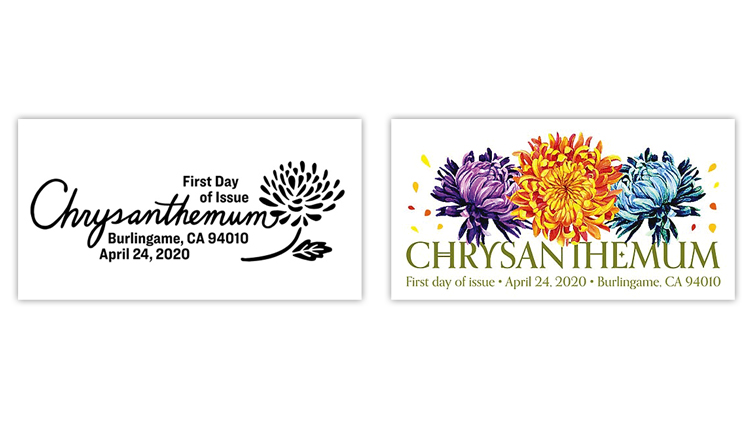 The newest global forever stamp from the United States Postal Service pictures a pink chrysanthemum bloom photographed from above.

The nondenominated ($1.20) stamp has an April 24 issue date in Burlingame, Calif., but will be available for purchase nationwide in panes of 10.

Burlingame was the scheduled site of the 2020 Westpex stamp show and philatelic exhibition, but both the show and its plans for a first-day ceremony for the new stamp were canceled because of the coronavirus COVID-19 outbreak.

Like the six previous global forever stamps issued since the first appeared in 2013, the new stamp is a round self-adhesive with die-cut simulated perforations.

The central image of a pink chrysanthemum is credited as an existing photograph by Hong Vo. The stamp was designed by Greg Breeding, working with USPS art director William J. Gicker.

It was offset printed by Ashton Potter (USA) Ltd., one of the Postal Service’s two current contract printers.

The global forever stamp is always valid for the current first-class international letter rate for machineable mail weighing 1 ounce or less. That rate increased from $1.15 to $1.20 on Jan. 26.

The previous stamp in the global forever series shows a green succulent plant known as the echeveria and was issued almost exactly three years ago on April 28, 2017 (Scott 5198).

The new Chrysanthemum stamp is sold in panes of 10, but smaller quantities and single stamps can be purchased at post offices. The Postal Service is not making an automatic push distribution to post offices, so some locations might not have the stamp in stock on the issue date.

“Known as the ‘Queen of the Fall Flowers,’ mums (as they are popularly called) are one of America’s favorite garden, cut, and container plants,” according to the Postal Service.

“Among the many different types of chrysanthemum blooms are cushion, daisy, decorative, pompom, and spider. Chrysanthemum flowers come in many colors, including lime green, bronze, rust, maroon, white, yellow, and purple.

“The fall-blooming chrysanthemum symbolizes joy and optimism in the face of the oncoming winter months, and the flowers are popular worldwide.”

The Postal Service has showcased the chrysanthemum on stamps before, including a 32¢ Garden Flowers booklet stamp issued Sept. 19, 1995 (Scott 2994).

More recently a single mum was featured on two similar stamps in the Beautiful Blooms set that features 10 different designs in a coil and in a double-sided pane (Scott 4174 and 4176).