U.S. Penny Black centennial: no stamp but many souvenirs 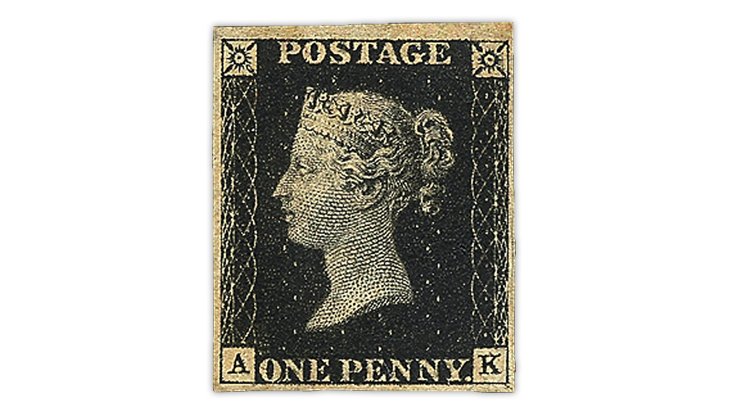 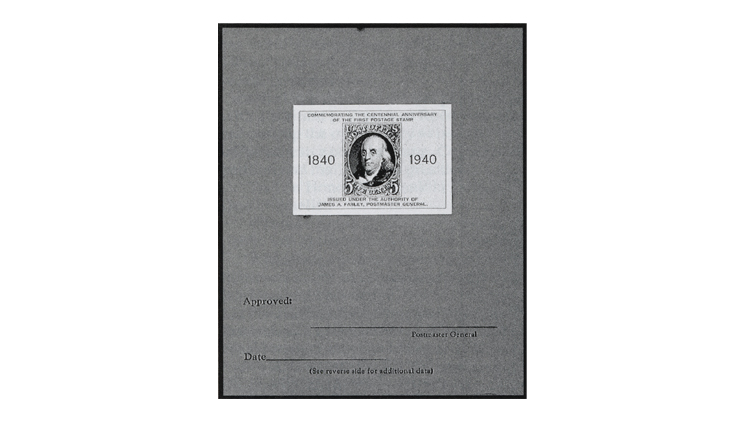 Figure 2. This design proposal, produced by the Bureau of Engraving and Printing, was sent to the White House in early 1940 in response to President Franklin D. Roosevelt’s request for a stamp to honor the 100th anniversary of the Penny Black. It did not 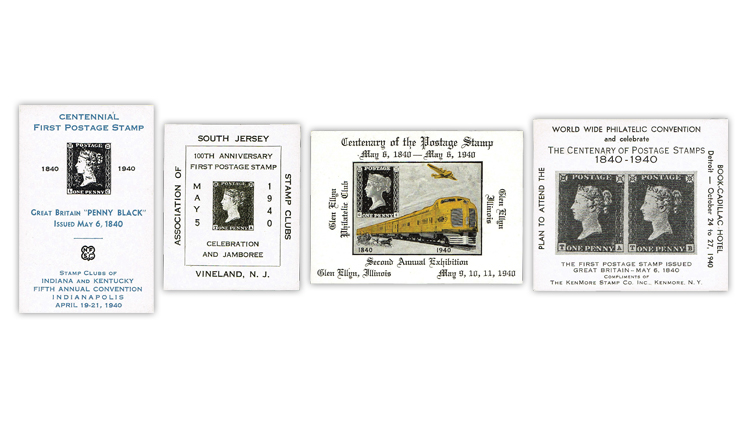 Figure 3. American stamp clubs and societies released more than 90 souvenir sheets to recognize the 100th anniversary of the Penny Black stamp of Great Britain in 1940. Four examples are shown from different stamp clubs in Indiana, New Jersey, Illinois an
Previous
Next

The world’s first postage stamp, the Penny Black, was issued by Great Britain in 1840. It is shown in Figure 1.

The next major anniversary for the Penny Black will be in 2040. I hope to see a United States issue to mark the event. An effort was made for the U.S. Post Office Department to commemorate the 100th anniversary, but it was thrown out at third base.

The movement for a U.S. stamp was born after Great Britain announced in 1939, with regret, that due to the war in Europe it would not be able to issue a 100th anniversary stamp “unless this war ends quickly.”

This prompted a movement in the United States to fill the gap. The philatelic press pushed the idea, asking readers to sign and send a petition to the White House. The petition was printed as part of the story.

It must have had the desired effect because on Dec. 1, 1939, President Franklin D. Roosevelt sent a memo to the postmaster general asking, “What can we do about celebrating the centenary of the first Postage stamp — even if it was British!”

Postmaster General James A. Farley responded on Dec. 14: “I doubt that the adoption of the first stamp in a foreign country is to be construed as of sufficient importance to justify official recognition and promotion, especially in view of the disturbed conditions that prevail in Europe.”

“It is my suggestion that the sponsorship of the celebration be left in the hands of the national stamp societies and other philatelic organizations,” Farley concluded.

Roosevelt was not convinced and raised the idea in a Cabinet meeting. Secretary of the Interior Harold Ickes subsequently wrote to the president on Dec. 21: “I must say that I consider this an appropriate thing to do.”

“I was much impressed by your argument at Cabinet, that to give official recognition to such a celebration here might give us an opportunity to emphasize the importance of free and cheap intercommunication as a potent agency for peace and the up-building of civilization.”

The president sent Ickes’ note to Farley, adding that “I really feel that we should do something more than leave the Centenary of the first postage stamp to a group of philatelists. Try to think of something.”

The president’s wish expressed with Ickes’ note seems to have turned Farley around. In January 1940, the Post Office Department produced an essay of a souvenir sheet picturing six early U.S. stamps. It was sent to the White House, where Roosevelt made some suggestions for changes.

Here we have a knowledge gap because there apparently is no image in public hands or in the Bureau’s records of this original design concept. If a Linn’s reader has this image, I would appreciate receiving a copy so that it can be shared in a future column.

The POD’s concept and Roosevelt’s suggestions were sent to the Bureau of Engraving and Printing, where Robert Miller did a final model for approval. The model is shown in Figure 2. The illustration is from Franklin D. Roosevelt and Stamps of the United States 1933-45 by Brian C. Baur, published in 1993 by Linn’s Stamp News. The image was included in the chapter titled “FDR-era stamps that never were.”

Submitted to the White House on March 19, the model drew this March 22 response from the president: “I do not like this design at all. The object was to commemorate the first postage stamp in the world. This design makes it look as if the 5¢ USA stamp, issued many years later, was the first postage stamp in the world. It would be greatly criticized if we were to get this out. I, therefore, suggest that the whole proposed issue be abandoned.”

Farley subsequently announced officially that there would be no U.S. stamp for this subject. On the other hand, Great Britain did issue a set of stamps after all on May 6, 1940 (Scott 252-257).

Why the president changed his mind is a matter of speculation, but the essence seems to be that honoring the British in this way might be seen as incompatible with U.S. neutrality. Whatever the case, the matter was indeed left “to a group of philatelists.”

Many stamp collecting groups responded by making the 100th anniversary the theme of their philatelic events in 1940, releasing a wide range of attractive souvenir sheets. Examples are shown in Figure 3. To a lesser extent, there have been similar celebrations for the 125th, 150th and 175th anniversaries.

I did not realize how popular these anniversaries were until Linn’s reader Keith Johnson of Studio City, Calif., told me about his collection, and I began to watch for examples to send him. I was amazed by the numbers and varieties that were produced.

When I asked Johnson to make a want list for me so I could buy examples he needed, he did me one better. He has updated an old Stamps on Stamps Study Unit (of the American Topical Association) list of U.S. club and society souvenir sheets created to commemorate the 100th anniversary of the world’s first stamp.

The list includes 90 major entries and many subvarieties. He has made it available to me in electronic form so that Linn’s readers interested can request it at no charge.

If you would like to receive it, please send me an email at jmhstamp@verizon.net. If you want a copy and are not on the Internet, send me $2 in mint U.S. postage (Box 1125, Falls Church, VA 22041-0125), and I will send you a printout of the eight-page document.