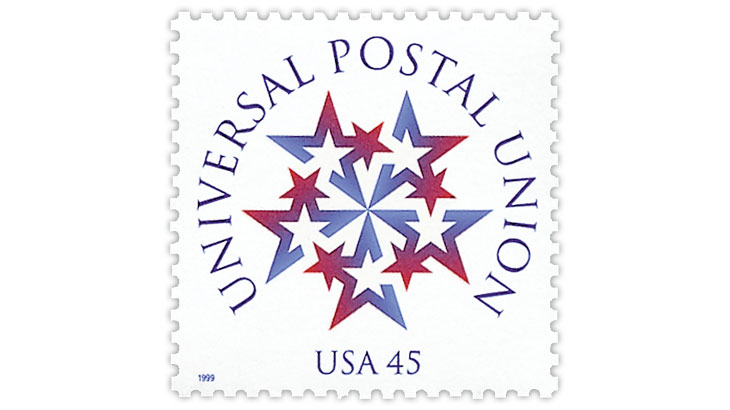 The United States, a Universal Postal Union member since its formation in 1874, is planning to leave it. USPS board members commented on the upcoming departure at a Feb. 8 public meeting in Columbus, Ohio. A 45¢ stamp marking the 125th anniversary of the

During its Feb. 8 public meeting in Columbus, Ohio, the United States Postal Service board of governors issued a comment on President Donald J. Trump’s decision to withdraw U.S. membership in the Universal Postal Union.

Established in 1874 with the United States as a founding member, the UPU is a United Nations organization that coordinates mail activities and rates between its 192 member countries.

“We’ve been working closely with the administration on the Postal Service’s relationship with the Universal Postal Union,” said USPS governor Robert M. Duncan.

“The president’s decision to move to self-declared rates is one that we fully support as a board. It will generate revenue and insure we’re no longer subsidizing foreign governments and companies.

“And this board will continue to closely oversee this process that culminates later this year.”

The recent decision by the White House to pull the country out of the UPU has been attributed by many sources as a response to certain UPU international postage rates favoring other countries, with China singled out most frequently.

According to a presidential memorandum signed by Trump Aug. 23, 2018, the United States is seeking “a system of fair and nondiscriminatory rates for goods that promotes unrestricted and undistorted competition.”

“This letter constitutes notification by the Government of the United States of America that it hereby denounces the UPU Constitution and, thereby, withdraws from the Universal Postal Union,” Clivaz said, quoting from Pompeo’s letter.

The withdrawal will be effective one year from when the UPU received the letter, which would be this year on Oct. 17.

“I wish to inform you that [UPU] Director General Bishar A. Hussein will be seeking to meet with representatives of the Government of the United States of America to further discuss this matter,” Clivaz continued.

“I wish to assure everyone that the UPU remains committed to the noble aims of international collaboration.

“This means ensuring that, by working with all 192 member countries, the UPU treaties best serve everyone, including the United States of America.”

“The Postal Service and our governors, we fully support the administration’s decision to move to self-declared rates.

“There are a series of regulatory proceedings that need to occur, so we’ll continue to work both with the PRC [Postal Regulatory Commission] as well as with the State Department and other stakeholders as we work to implement this decision,” Brennan said.