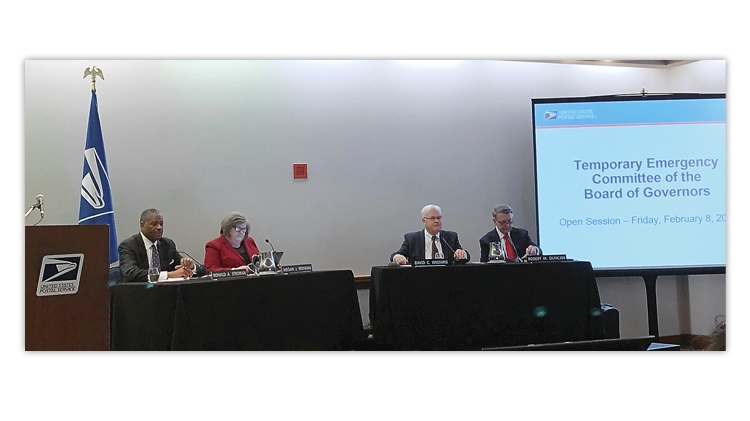 The United States Postal Service board of governors’ temporary emergency committee, shown at a Feb. 8 meeting in Columbus, Ohio. Three new members of the board were approved by the U.S. Senate Aug. 1. Linn’s Stamp News photo by Jay Bigalke.

The presidentially appointed board that has overseen the United States Postal Service since 1970 is back in business.

On Aug. 1, the U.S. Senate approved the appointment of three new members to the Postal Service board of governors.

That long-awaited action could clear the way for the board to have five presidential appointees at a meeting Aug. 9 in Washington, D.C.

Some of the more sensitive issues facing the governors, such as hiring and firing the postmaster general and issuing the last word on proposed postal rate increases, require six governors.

As the number of presidential appointees in the postal boardroom shrank to zero in recent years, the agency created a “temporary emergency committee” to handle the tasks by law assigned to the governors.

An impasse between the Senate and the White House over the appointment of new governors surfaced during the administration of President Barack Obama.

Sen. Bernie Sanders, I-Vt., was pressuring USPS to reestablish banking services at its branches, a move the agency did not support. Sanders, a Democratic presidential candidate, placed holds on the board appointments, blocking the required Senate confirmations.

President Donald Trump has been slow to fill all nine presidential vacancies on the postal board.

They will join two other Trump appointees, David C. Williams, the former USPS inspector general, and Robert M. Duncan, a Kentucky banker. Both were confirmed in 2018.

Duncan’s term has expired, and Williams’ term will end later this year. Both can serve another year or until they are replaced.

“The U.S. Postal Service is pleased with yesterday’s action by the U.S. Senate to confirm nominees to the Postal Service Board of Governors,” said USPS spokesman David Partenheimer. “We look forward to working with John Barger, Ron Bloom, and Roman Martinez IV when they begin their terms as governors, and thank the administration for nominating them to serve on the board.”

“The public interest and the Postal Service are best served by a board made up of well qualified individuals with diverse perspectives and experience,” he said.

In addition to the three new governors, the Senate also confirmed the appointments of Ann C. Fisher of Washington and Ashley Jay Elizabeth Poling of North Carolina to be members of the Postal Regulatory Commission.

This is the agency Congress established to oversee postal rate increases and other issues.