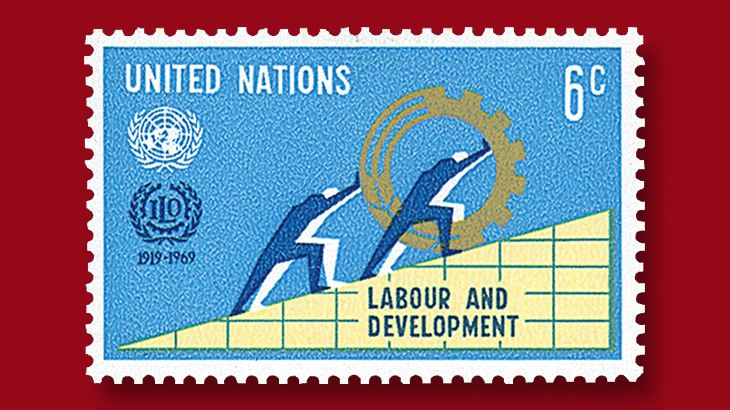 The United Nations issued stamps in 1969 for the 50th anniversary of the International Labor Organization. Stamps for the 100th anniversary are planned for 2019.

The United Nations Postal Administration recently announced its 2019 stamp program in its bulletin for collectors, Fascination (issue No. 127).

Six commemorative stamp sets are planned for next year, along with seven special event panes or souvenir sheets, and one definitive issue.

International Mother Language Day and World Bee Day will be celebrated on stamps to be issued Feb. 21 and May 20, respectively. These sets, like all of the commemorative sets, will include denominations for each of the three U.N. post offices located at U.N. headquarters in New York City; the Palais des Nations in Geneva, Switzerland; and the Vienna International Center in Vienna, Austria.

A set of six stamps and a souvenir card will be issued June 28 to honor the 100th anniversary of the International Labor Organization.

The theme of an Oct. 25 issue of six stamps and three souvenir sheets will be “Life Below Water.”

Two other commemorative sets are part of long-running stamp series. New stamps in the Endangered Species series are slated for release on April 26. The World Heritage series will continue Sept. 6 with six stamps and three prestige booklets featuring Cuba.

The first of what UNPA calls “special event sheets” to be issued in 2019 will be the Year of the Pig pane of 10 $1.15 stamps and 10 labels on Jan. 11. This will be the ninth pane in UNPA’s Chinese Lunar Calendar series.

Two souvenir sheets will mark the Stockholmia 2019 and China 2019 international philatelic exhibitions. Each sheet will include three stamps in three different currencies.

The Stockholmia sheet will be issued May 29, the opening day of this exhibition in Stockholm, Sweden. The sheet for the exhibition in China is scheduled to be issued in August, according to the UNPA.

On Nov. 25, the UNPA will recognize the International Day for the Elimination of Violence Against Women with a pane of 10 $1.15 stamps and 10 labels.

Another special event pane with a proposed November release date will mark the 25th session of the Conference of the Parties to the UNFCCC (the U.N. Framework Convention on Climate Change) and the 2019 climate summit.

New definitive stamps are scheduled to be issued March 15 in sheets of 20.

The UNPA 2019 program is tentative and subject to change.