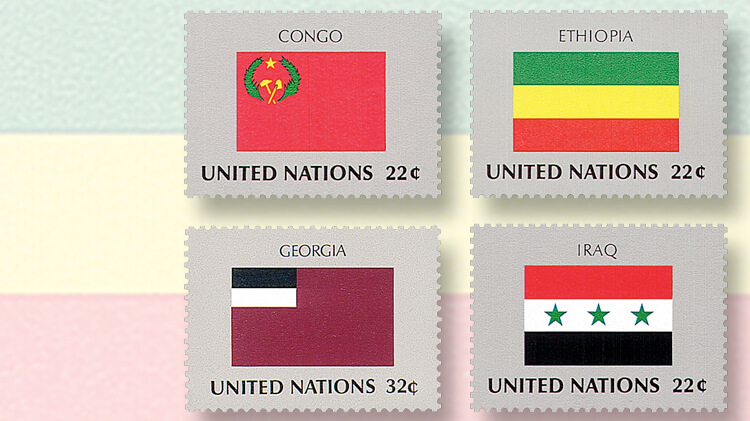 Earlier versions of the flags of Congo, Ethiopia, Georgia, and Iraq as portrayed on stamps in the U.N. Flag series. 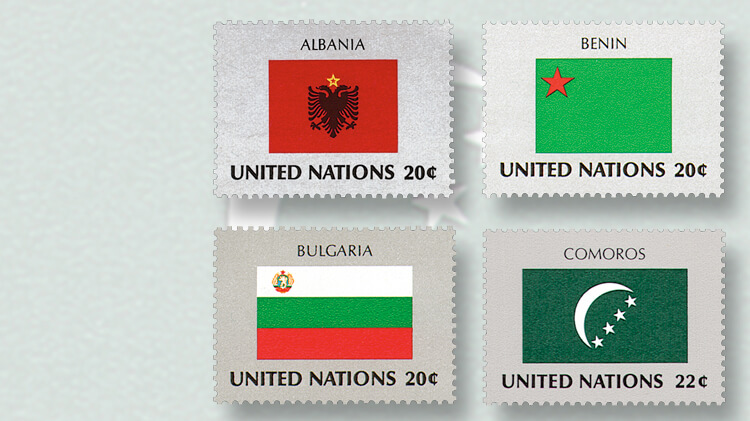 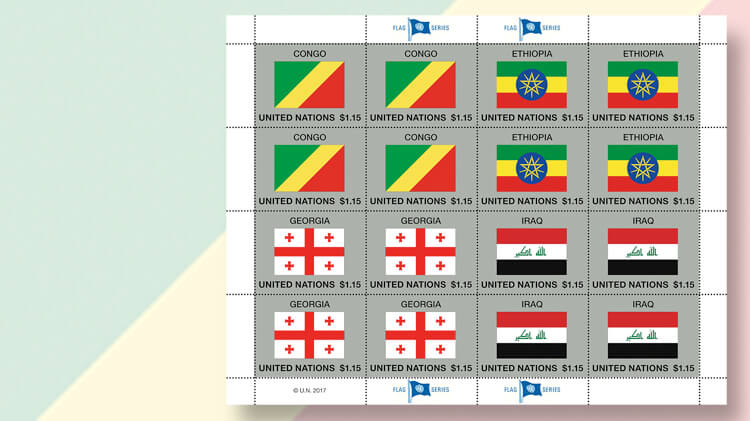 The other 2017 United Nations Postal Administration Flag sheet will include stamps showing the updated flags of Congo, Ethiopia, Georgia, and Iraq. 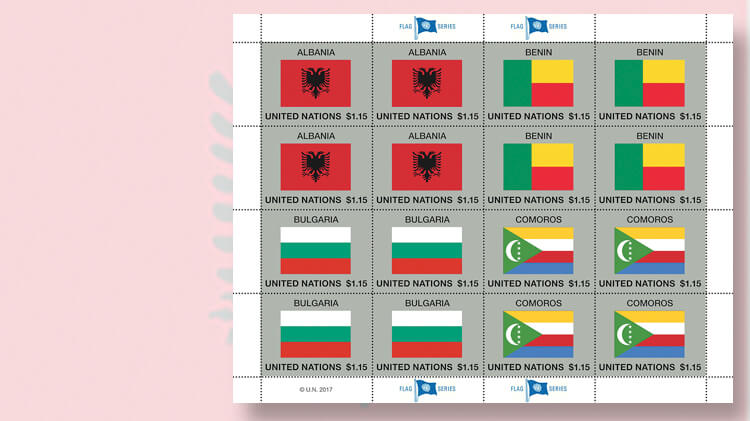 The 2017 entry in the U.N. Flag series will feature new designs for eight member states in two sheets of four designs each. One sheet will include stamps each showing the current flags of Albania, Benin, Bulgaria, and Comoros.
Previous
Next

On Feb. 3, the United Nations Postal Administration’s New York office will continue its long-running Flag series after a two-year hiatus.

The original series was issued from 1980 to 1989 and included a stamp with the flag and official member name of all U.N. member states.

Beginning in 1997, additional stamps followed as new member states were admitted to the United Nations, the newest being South Sudan in 2011. The flag of South Sudan appeared on a stamp issued in 2013 (Scott 1065).

Also in 2013 and 2014, new issues began for member states that had changes to their flags and/or official U.N. member names since their first Flag stamp was released. There are an estimated 40 U.N. member states in need of second stamp issues in this series.

The 2017 set will consist of eight stamps printed in two sheets of 16 stamps each (four designs per sheet) featuring the flags of Albania, Benin, Bulgaria, Comoros, Congo, Ethiopia, Georgia, and Iraq. The designs reflect changes to their flags.

The original Albania stamp in the Flag series was issued in 1982 (Scott 379). The five-pointed golden star above the double-headed eagle on its flag was removed April 7, 1992, after the collapse of its communist government.

The new Benin stamp updates the design from 1984 (Scott 427). On Aug. 1, 1990, Benin reverted to its original flag created around the time of its independence from French colonial rule in 1959.

The 1984 stamp featured the green flag with a red five-point star in the upper left that was adopted in 1975 following a coup and rise of a Marxist-Leninist government.

Bulgaria’s flag first appeared on a U.N. Flag stamp in 1983 (Scott 409). The coat of arms in the upper left, showing a lion within a wreath of wheat ears and red five-point star above it, was removed in 1991 after the collapse of its communist government.

A series of changes were made to the flag of Comoros since the original Flag stamp in 1987 (Scott 499). The last change was on Jan. 7, 2002, when four horizontal stripes of different colors were added, and the crescent and stars previously at the center of a green flag were rotated upright and moved to within a green chevron on the left side.

The new stamp showing the flag of the Congo updates the issue from 1987 (Scott 508). On June 10, 1991, Congo reverted to its original flag created around the time of its independence from French colonial rule in 1959.

The 1987 stamp featured a red flag with a coat of arms in the upper left depicting an overlapping hammer and hoe encircled by a wreath below a gold star. This flag was adopted in 1970 following a coup and the rise of the first Marxist-Leninist government in Africa, the People’s Republic of the Congo.

The new stamp showing Ethiopia’s flag updates the issue of 1986 (Scott 482). The tricolor flag used by its then-communist government underwent a series of changes when the country transitioned to a federal parliamentary republic. The most recent change, on Oct. 31, 1996, resulted in its current flag, which is horizontally longer and displays Ethiopia’s national emblem (a yellow interlaced pentagram radiating rays of light on a dark blue shield) in its center.

On Jan. 25, 2004, Georgia adopted a new flag design showing five crosses in red on a white background. The U.N. Flag stamp issued in 1997 (Scott 691) illustrated the flag adopted in 1991 after Georgia’s independence from the Soviet Union. This wine-red flag had a black-and-white rectangle in the upper left.

Iraq’s new Flag stamp shows the last of a series of changes to its flag since the U.N. Flag stamp issued in 1987 (Scott 506). This change, made Jan. 22, 2008, replaced the three green stars on its center stripe with the inscription “Allahu akbar” in green Kufic Arabic script.

The UNPA plans to continue its Flag series in 2018 with another eight stamps in the same format showing updated flags of member states.

To illustrate the challenge of keeping the U.N. Flag stamp designs up-to-date, consider Cape Verde (Cabo Verde in Portuguese), which had its original entry in the series in 1982 (Scott 386).

Ten years later, its flag was changed, resulting in another Flag stamp on May 2, 2013 (Scott 1066). On Oct. 24, 2013, the official U.N. member name of this country was changed from Cape Verde to Cabo Verde, necessitating a third Flag stamp in the future.

The related U.N. Flags and Coins series began in 2006 and had its last issue to date in 2015. This series is spread out across the three U.N. post offices (New York; Vienna, Austria; and Geneva, Switzerland). Each issue has consisted of one sheet of eight different stamps for each U.N. office.

The stamps feature the flag, official U.N. member name, and a coin of each member state.

This series is also in need of new designs because there have been changes to the flags and/or official member names of about seven U.N. member states. Also, South Sudan, the newest U.N. member state, does not have an entry in this series yet.