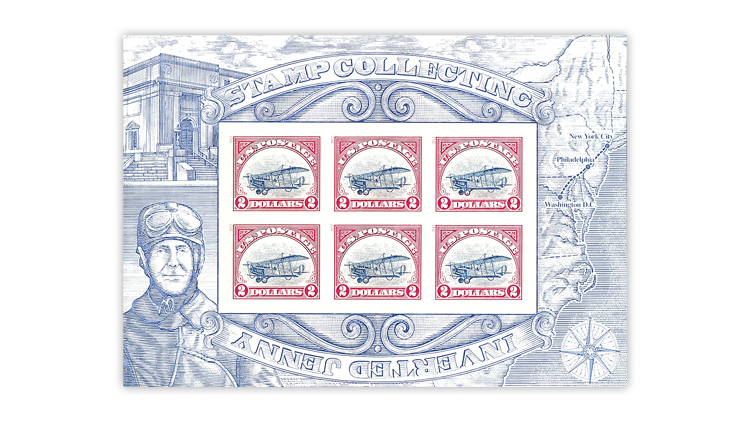 Two previously unknown panes of six of the rare upright variety of the 2013 $2 Jenny Invert stamps were reported in August. Linn’s tally hits 42 reported to have been found. Image courtesy of Professional Stamp Experts.

More than nine years after the $2 Jenny Invert stamps were placed on sale collectors continue to find the rare upright Jenny Invert variety.

Over the past month, two collectors have contacted Linn’s Stamp News to report new finds. Prior to that, the last update published was in the June 8, 2020, issue of Linn’s. The tally at that time was 35 known. Based on new information from the United States Postal Service, it appears that a few panes were not brought to our attention.

Linn’s is also aware of at least two panes that have not been reported to USPS for a certificate: one found shortly after the stamps were issued and one from a new report.

One of the two new finds in August is the example reported to the Postal Service as noted by McKean. The other was found by a collector on the West Coast, who called Linn’s to report it anonymously.

That collector sold the pane to Henry Gitner Philatelists Inc., who then had it certified by the expertizing firm Professional Stamp Experts (PSE) in Nevada.

Scott Murphy of PSE provided the scan of the pane that is shown nearby.

Both of the recently reported panes of the upright Jenny Invert variety came from new stamp orders received from the USPS through Stamp Fulfillment Services in Kansas City, Mo.

The $2 Jenny Invert stamps (Scott 4806) were issued in panes of six on Sept. 22, 2013, as a tribute to America’s most famous stamp error. That 1918 24¢ Jenny Invert airmail stamp has its blue Jenny biplane accidentally printed upside down within the carmine rose frame (Scott C3a).

The $2 Jenny Invert stamps were at the center of a Postal Service promotional program that included just 100 specially printed panes intentionally showing the Jenny biplane in the center of each stamp flying right-side up. The regularly issued $2 stamp portrays the plane upside down.

Each of the 2.2 million panes of the 2013 issue was sealed in a printed paper envelope within a cellophane wrapping, thwarting efforts to detect the rare upright variety seeded among the common standard issue.

The 100 upright Jenny Invert panes were packaged with a card printed with a phone number the finder could call to receive a certificate signed by the U.S. postmaster general and to register the purchase and discovery. But because the registration is voluntary, it is presumed that some of the found panes were never recorded.

All the unsold panes at post offices were recalled and returned to Stamp Fulfillment Services in Kansas City, Mo., where they remain on sale.

A search for “Jenny” on the USPS Postal Store website on Sept. 13 showed the $2 Jenny Invert stamp still listed in the available online inventory.