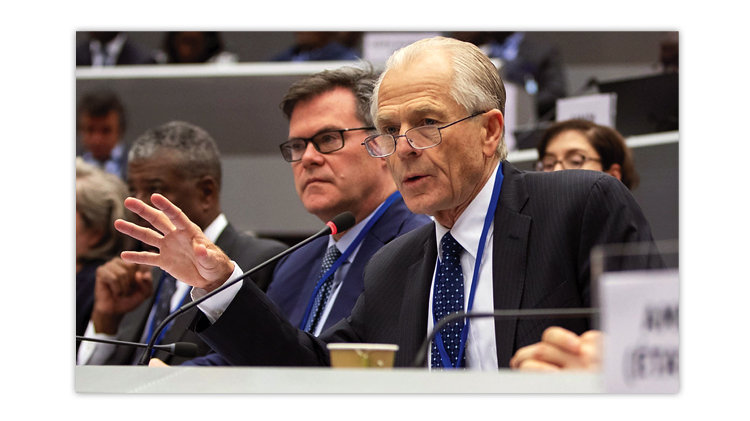 Peter Navarro, director of the Office of Trade and Manufacturing Policy, addresses the Third Extraordinary Congress of the Universal Postal Union Sept. 24 in Geneva, Switzerland. On Sept. 25, the UPU endorsed a compromise plan that will allow the United States — not the UPU — to set the prices for incoming foreign mail.

The day after the Universal Postal Union rejected a Trump administration plan for dealing with a flood of mostly Chinese packages, it overwhelmingly endorsed a compromise plan that will allow the United States — not the UPU — to set the prices for incoming foreign mail.

“This is a big deal,” declared Peter Navarro, who led President Trump’s assault on the current international mail system.

Navarro serves as trade specialist in the White House and is director of the Office of Trade and Manufacturing Policy. The UPU is the United Nations specialized agency that facilitates the exchange of mail between countries worldwide.

“It’s a total victory for the UPU and the United States,” Navarro said at a Sept. 25 news conference after the second vote.

What the so-called “victory” plan will do is allow the United States as early as next summer to establish a new — and presumably more costly — price schedule for letters and packages from overseas. Other nations can follow, setting their own prices over the next five years.

Countries that have inbound letter-post volumes in excess of 75,000 metric tons based on 2018 data will be able to self-declare rates starting July 1, 2020, the UPU said.

Angered over a flood of Chinese packages, Trump had threatened last October to end U.S. participation in the 145-year-old UPU and let the United States establish its own rates for foreign mail.

The president was especially furious about Chinese merchants who were mailing small parcels, often filled with illicit drugs, into the United States. Trump said they were doing so at prices cheaper than domestic mailers must pay.

Trump’s threat for the United States to exit the UPU could create what Bishar Hussein, secretary-general of the UPU, called “really a nightmare scenario” of undelivered mail, piles of undelivered packages and rejected letters with U.S. stamps in all the UPU member countries.

Without the United States, the UPU could collapse, Hussein warned.

Postal administrations around the world openly feared that the UPU would collapse in chaos as its 192 member countries attempted to negotiate postal rates with each other.

The UPU called for an extraordinary congress of its members in Geneva, Switzerland, to deal with the issue.

That meeting became a showdown on Sept. 24 when the 144 members in Geneva voted 78 to 57 to reject what Navarro had described as the favored U.S. option.

It would have allowed the countries to immediately establish “self-declared rates” for incoming foreign mail instead of paying the current system of UPU terminal dues for international mail.

Meeting late into that night, UPU officials, who desperately wanted to keep the United States in the organization, and U.S. officials scrambled to reach a compromise.

That plan, presented on Sept. 25, won overwhelming support and was approved by acclamation.

It will certainly lead to higher postage bills for Chinese merchants, Navarro said.

The deal will force the United States to pay $40 million to the UPU over the next five years for increased mail security steps, he said.

But that, Navarro said, was a bargain.

The U.S. Postal Service is paying $300 million to $500 million a year to subsidize the costs of handling underpriced foreign mail, he said.

“Did we buy the agreement?” Navarro asked aloud. “I think not.”

“Not one single country is going to walk out over this,” he said.

“The administration has accomplished more with the UPU in the past year than the U.S. has over the past 20 years,” said Paul Steidler, a Lexington senior fellow.

Navarro had made a big point of spotlighting the president’s role when speaking in Geneva.

“I have no doubt that President Trump will go down as one of the greatest presidents in American history,” he said as he detailed Trump’s discovery of the issue.

“He called me into the Oval Office and simply said, ‘Fix it.’ ” Navarro said.

The problem was the UPU’s system of terminal dues, which Navarro described as a “system that everyone in this room knows is broken.”