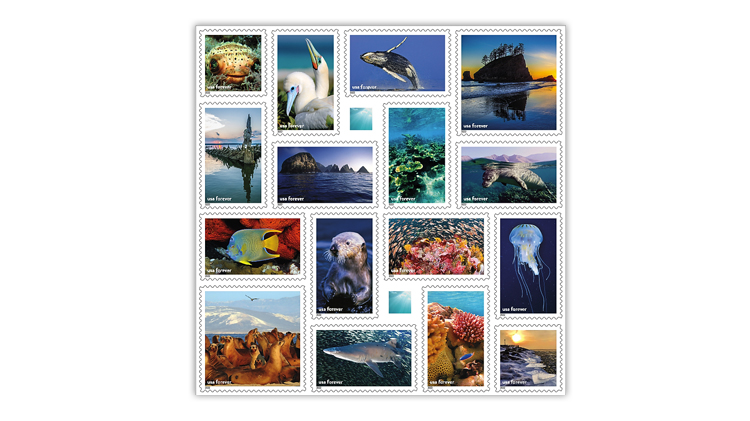 The United States Postal Service announced April 21 issue dates and locations for several upcoming 2022 issues. The 16 stamps celebrating the 50th anniversary of the establishment of the National Marine Sanctuary System will be issued in Santa Cruz, Calif

The United States Postal Service announced April 21 the issue dates and locations for a number of upcoming 2022 stamps.

Five stamps celebrating mariachi music will be issued July 15 in Albuquerque, N.M. The stamps feature artwork by Rafael Lopez and will be issued in panes of 20.

According to the Postal Service, each stamp “features a musician dressed in a traje de charro, the traditional outfit of mariachi performers, playing one of five iconic mariachi instruments: guitar, guitarron, vihuela, violin and trumpet.”

Legendary activist and charismatic folk singer Pete Seeger (1919-2014) takes center stage on a stamp to be issued July 21 in Newport, R.I. It is the 10th issue (13th stamp overall) in the popular Music Icons series. Dan Seeger took the early 1960s color-tinted photo of his father that appears on the stamp.

A pane of 16 stamps celebrating the 50th anniversary of the establishment of the National Marine Sanctuary System is set for release Aug. 5 in Santa Cruz, Calif. Each stamp pictures a photo from one of the sanctuaries in the system.

These precious habitats “have protected areas with special ecological, cultural and historical significance,” the USPS said.

Hohenwald, Tenn., is the location of the Aug. 12 first day for a single forever stamp picturing a charming illustration of a tusked elephant nuzzling a young calf with its trunk. The stamp will be issued in double-sided panes of 20.