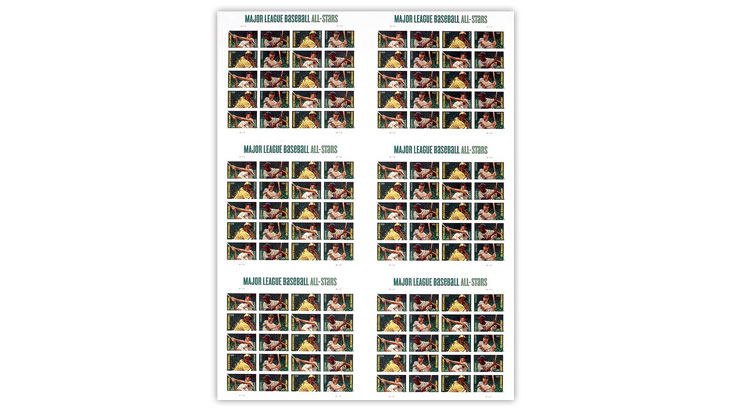 It is a reboot of a program that previously ran from July 2012 through February 2016.

“Our philatelic customers have been asking for some time for us to bring back uncut press sheets without die cuts,” Betts said. “We have decided to do this for 2021.”

The imperforate uncut sheets will be available with the 2021 commemorative program, Betts noted, with pricing dependent upon the number of stamps on the press sheet.

Which 2021 issue will be the first to be made available without die cuts has not been revealed.

The Postal Service has offered modern U.S. stamp press sheets in various forms since 1994, when the revised 29¢ Legends of the West stamps (Scott 2869) were issued in a press sheet comprising six unsevered panes of 20 stamps.

Most commonly, the press sheets were offered as an item to be ordered from Stamp Fulfillment Services, the USPS division in Kansas City, Mo., that processes retail stamp orders submitted by mail, telephone or online.

Until 2012 press sheets were only offered perforated (for stamps with moisture-activated gum) or with die-cut separations (for self-adhesive stamps).

The imperforate, or no-die-cut press sheets continued to be created and sold for selected commemorative and definitive stamps.

In the Scott Specialized Catalogue of United States Stamps and Covers, the imperforate stamps from these press sheets are listed with lower case suffix letters as minor varieties, and a footnote describing the press sheet follows the individual listing.

Many collectors would save the full uncut sheet, usually ranging from four to nine unsevered panes, intact.

Others would save carefully divided configurations from the press sheet that are not available from a single pane, such as cross-gutter blocks involving pairs or blocks of multiple stamps from the adjacent corners of four panes from that part of the sheet where those panes normally would be separated (the gutter).

Still other collectors would divide the imperforate sheet into imperforate panes, creating a novel variety that could be displayed in an album along with the normally die-cut pane sold at post offices.

In most instances, these imperforate varieties have some small premium value in the Scott catalog beyond the value of the normally issued pane with die cuts.

A six-pane press sheet of 72 stamps was issued for the 2016 Year of the Monkey Lunar New Year forever stamp (Scott 5057) in both die-cut and no-die-cut versions.

But that was the last U.S. press sheet to appear without die cuts.

Press sheets continued to be issued for selected stamps, but only with the die cuts separating the individual stamps on the pane.