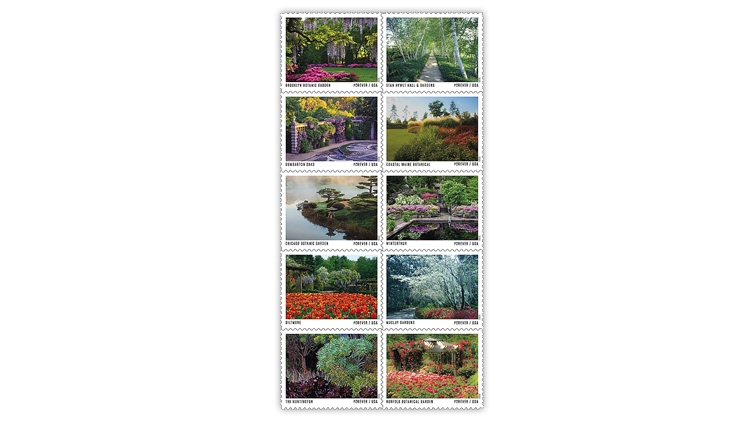 The American Gardens set of 10 stamps will be issued May 13, but the United States Postal Service has canceled its planned first-day ceremony.

The United States Postal Service has canceled three additional first-day ceremonies as a result of the coronavirus COVID-19 outbreak.

“These stamps will still be available for purchase on the scheduled first day of issue,” the Postal Service said, adding that “special dedication ceremonies may be scheduled later.”

The events were canceled in accordance with guidelines from the Centers for Disease Control and Prevention to avoid social gatherings involving 10 or more people.

The last first-day ceremony held this year was for the Arnold Palmer commemorative forever stamp in Orlando, Fla., on March 4.

The state of Maine postponed its bicentennial events scheduled for March 15, which were to include a first-day ceremony in Augusta for the Maine Statehood forever stamp.

Washington correspondent Bill McAllister subsequently reported that the ceremony for the Boutonniere and Corsage stamps was also off the schedule.

Not listed in the USPS media advisory is the Chrysanthemum global forever definitive stamp scheduled for issuance April 24.

The Postal Service did not announce a ceremony for the nondenominated ($1.20) Chrysanthemum stamp, but the Westpex stamp show in Burlingame, Calif., had scheduled such an event during the show’s opening day. However, the stamp show was also canceled in response to the ongoing global pandemic.