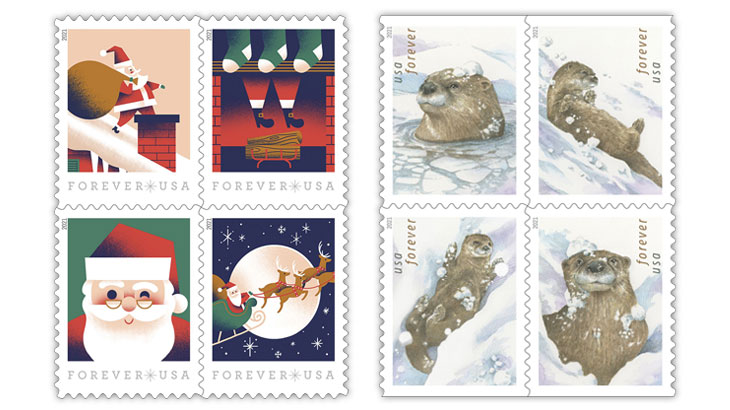 The United States Postal Service announced two new stamp issues for 2021 on May 14. The four forever Christmas stamps are called A Visit From St. Nick. The other set of four is titled Otters in Snow.

The United States Postal Service has added two wintertime stamp issues to its 2021 stamp program: A Visit From St. Nick and Otters in Snow.

The Postal Service revealed the designs of these eight forever stamps (four in each issue) on May 14.

The four Christmas/A Visit From St. Nick stamps will be issued in a booklet of 20; the release date was not announced.

The illustrations on these stamps tell the story of Santa’s visit on Christmas Eve.

The first stamp in the se-tenant (side-by-side) block of four shows Santa on a snowy rooftop. With his sack of Christmas toys slung across his back, he already has one leg inside the red brick chimney.

Santa is more than halfway down the chimney in the illustration on the second stamp. All that can be seen of him are his legs dangling above the unlit hearth. Three green stockings hang from the fireplace’s mantle.

The third stamp features a close-up of a winking Santa, no doubt referring to the line “A wink of his eye and a twist of his head” in the poem A Visit from St. Nicholas first published Dec. 23, 1823, in the Troy Sentinel. Also known as Twas the Night Before Christmas, the poem is attributed to Clement Clarke Moore.

In the fourth illustration, Santa departs in his green sleigh “with four reindeer visible as they fly across the face of the full moon and into a starlit sky,” according to the Postal Service.

The Otters in Snow stamps also will be issued in a booklet of 20. The stamps picture four scenes of a North American river otter enjoying winter’s snow and ice.

The Postal Service said: “The original illustrations were rendered in pen and ink, with watercolor in shades of brown for the otters, using black for facial features and crosshatching. The wintry background is white, with blue water, light blue and violet shadows, and black crosshatching.”

The Postal Service added that the stamp designs are preliminary and subject to change, and that further details, including the issue dates, will be announced later.