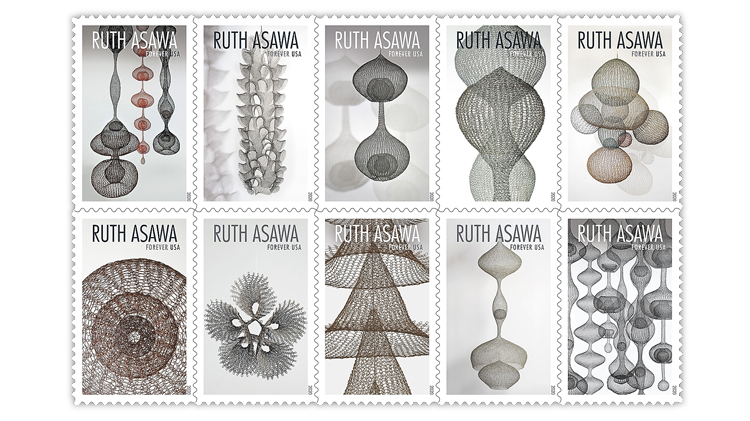 Ten United States forever stamps will be issued this year to honor California-based artist Ruth Asawa (1926-2013), whose intricately woven sculptures are pictured on the new commemoratives. 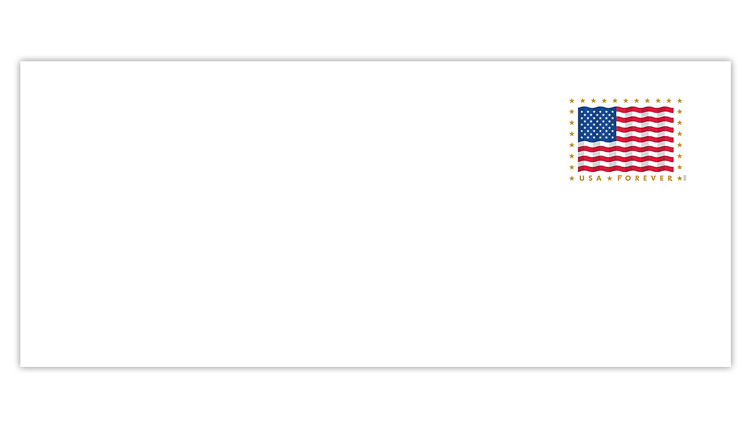 Kit Hinrichs created the Flag design featured on a new U.S. stamped envelope that is now scheduled to be issued in 2020. The envelope was originally announced in 2018 as a planned issue for 2019.
Previous
Next

Two new issues have been added to the United States stamp program for 2020: a set of 10 stamps showcasing the works of artist Ruth Asawa, and a previously revealed stamped forever envelope featuring the U.S. flag.

The U.S. Postal Service announced the upcoming issues on April 3. Issue dates for the two issues have not been disclosed.

Ruth Aiko Asawa was a California-based artist and sculptor born Jan. 27, 1926, in Norwalk, Calif. She further developed her natural artistic talent while detained as a teenager with her family during World War II in California and Arkansas internment camps for Japanese-Americans.

“Asawa made a name for herself as a sculptor,” Doug Criss reported for CNN last year, “but she was renowned as an arts education activist, too.”

The nondenominated (55¢) forever commemoratives picture 10 views of her elaborately detailed designs, carefully handwoven into abstract organic shapes using materials including brass wire and steel wire. Her creations often have been likened to nests or woven baskets.

Her public sculptures include Andrea, a 1968 mermaid-themed installation in a Ghiradelli Square fountain in San Francisco; and the 1994 bronze bas-relief Japanese American Internment Memorial at the federal building in San Jose, Calif.

The stamps will be issued in a pane of 20, featuring photographs by Dan Bradica and Laurence Cuneo. A photograph of Asawa taken by Nat Farbman in 1954 for Life magazine appears in the pane selvage. Ethel Kessler served as art director and designer.

The new stamped envelope features a graphic illustration of the American flag with six vertical folds to evoke a sense of the flag extended and fluttering in a strong wind.

The flag design is surrounded by 26 stars, including one between the USA and FOREVER inscriptions below the bottom of the flag.

The artwork by Kit Hinrichs evokes “a rich sense of history even as it presents a recognizable icon in a fresh, contemporary way,” according to the Postal Service.

Kessler also served as art director for the envelope project.

The new Flag design was originally revealed near the end of 2018 as an intended issue for 2019. However, the Flag envelope never appeared during the year and is now planned for 2020.