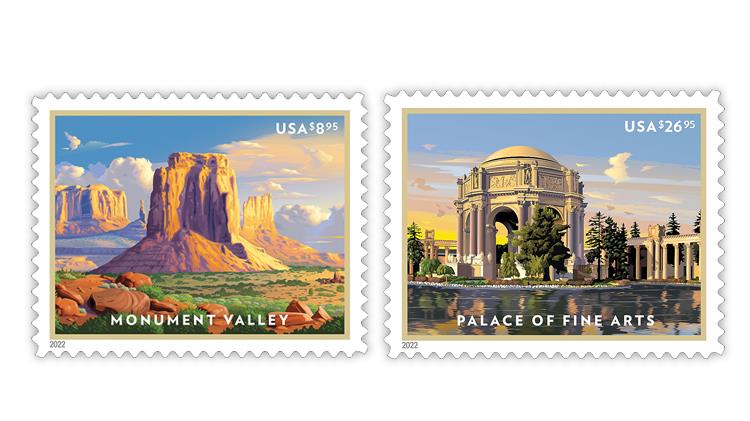 Two new stamps in the American Landmarks series will be issued Feb. 14. The $8.95 Monument Valley Priority Mail stamp and the $26.95 Palace of Fine Arts Priority Mail Express stamp are among a handful of 2022 stamp subjects announced by the United States Postal Service Jan. 11. 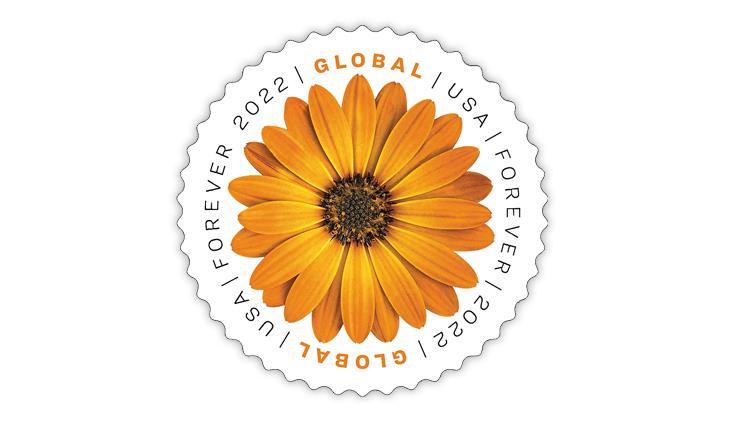 Kansas City, Mo., is the first-day city for the round global forever stamp featuring an African daisy to be issued March 14 in panes of 10. 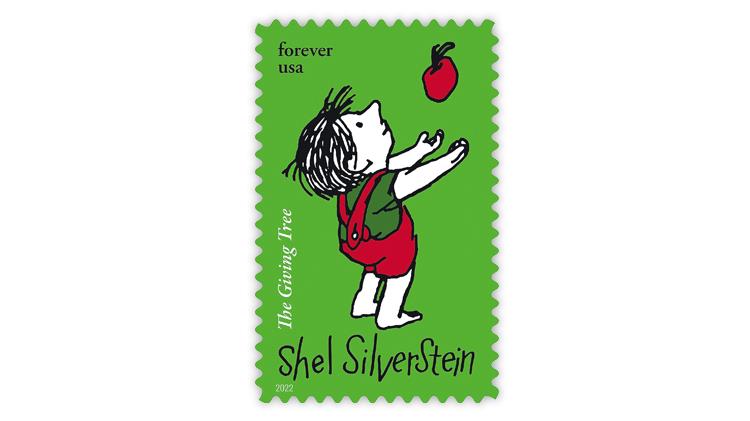 Beloved children’s author and illustrator Shel Silverstein (1930-99) will be honored on a single commemorative forever stamp to be issued sometime in 2022. 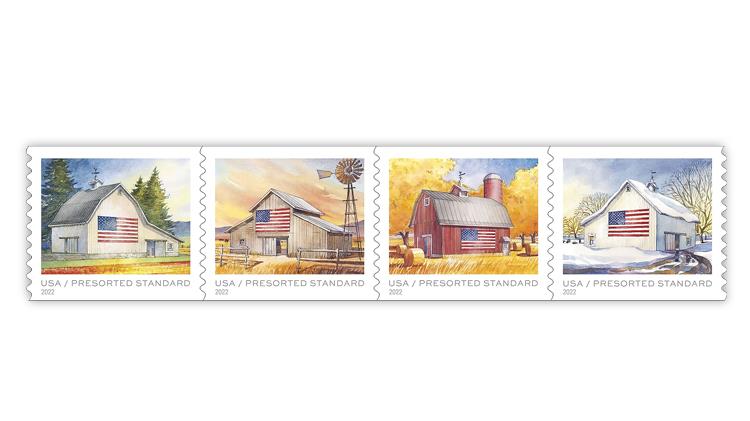 Four coil stamps intended for use by organizations that send large quantities of presorted mail will be issued in rolls of 3,000 and 10,000. The stamps show illustrations of U.S. flags painted on barns. 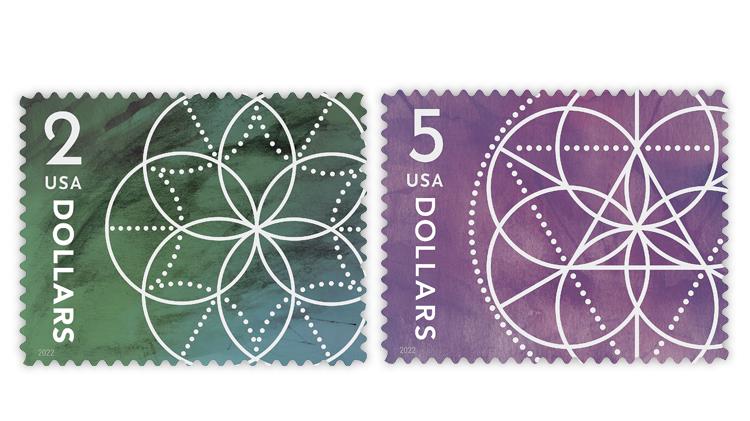 The Postal Service’s forthcoming $2 and $5 Floral Geometry stamps picture geometric shapes that imitate natural floral patterns. The stamps are to be issued in panes of 10 and panes of four, respectively. 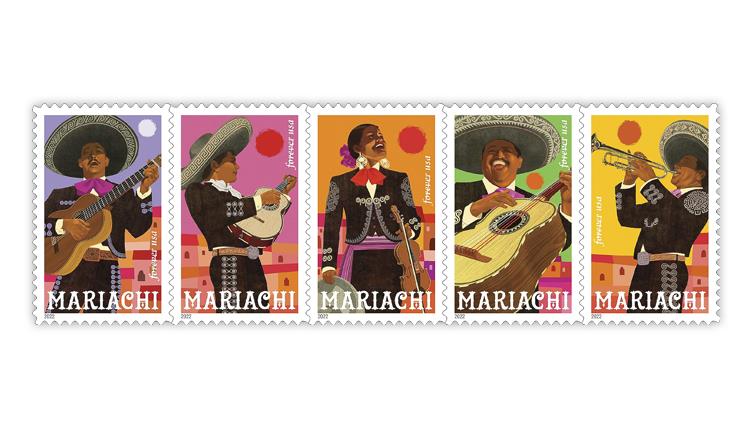 Vibrantly colored illustrations of mariachi musicians take center stage on five commemorative forever stamps to be issued in a pane of 20 later this year.
Previous
Next

Two new stamps for Priority Mail and Priority Mail Express featuring artwork by Dan Cosgrove will be issued Feb. 14 in different locations. Both stamps are the latest additions to the American Landmarks series that began in 2008.

An $8.95 Priority Mail stamp picturing a scene from Monument Valley in Utah will be issued in Monument Valley, Utah, without an official first-day ceremony.

“Reminiscent of a vintage travel poster, the stamp art emphasizes the vast stone formations of Monument Valley while highlighting the vivid colors of the sky, the land and the area’s distinctive plant life,” the Postal Service said.

Shown on the $26.95 Priority Mail Express stamp is the Palace of Fine Arts in the Marina District of San Francisco. This iconic landmark “has long been a source of pride for residents and an attraction for visitors from around the world,” according to the USPS.

The $26.95 Palace of Fine Arts stamp will be issued in San Francisco without a first-day ceremony.

A new round global forever stamp picturing a colorful African daisy will be issued March 14 in Kansas City, Mo., without a first-day ceremony.

“Native to southern Africa and often called the African daisy, plants from the Osteospermum genus are widely available in U.S. nurseries,” the USPS said.

The African Daisy stamp, which will be available in panes of 10, satisfies the postage for a 1-ounce letter mailed to an international destination. It will be good for all future increases in this rate, which is currently $1.30.

Beloved children’s author and illustrator Shel Silverstein (1930-99) will be honored on a single commemorative forever stamp. The USPS did not specify the issue date or location in its Jan. 11 announcement.

Art director Derry Noyes’ design “features a version of the illustration of a boy catching an apple that appears on the cover of ‘The Giving Tree,’ ” the Postal Service said.

The Giving Tree, published in 1964, is widely regarded as a classic of children’s literature.

Four coil stamps featuring Stephanie Bower’s illustrations of U.S. flags painted on barns will be issued in rolls of 3,000 and 10,000. The issue date and location are to be announced at a later date.

“The barns are set in landscapes inspired by the seasons and different regions of the United States,” the USPS said.

These coil stamps are inscribed “Presorted Standard” and are intended for use by organizations that send large quantities of presorted mail.

A $2 stamp and a $5 stamp depicting geometric floral patterns are to be issued later this year in panes of 10 and panes of four, respectively. The USPS did not specify a first-day city for the Floral Geometry stamps.

Spaeth Hill, a contemporary design firm in Alexandria, Va., designed and created the stamps. They showcase “a series of overlapping geometric shapes that mimic the symmetry of floral patterns found in nature. The watercolor backgrounds and the glimmer of the foil-stamped designs and typography create a sophisticated look,” according to the Postal Service.

Five stamps celebrating mariachi music feature artwork by Rafael Lopez. The stamps will be issued in panes of 20. The USPS did not announce an issue date or location for the Mariachi stamps.

According to the Postal Service, each stamp “features a musician dressed in a traje de charro, the traditional outfit of mariachi performers, playing one of five iconic mariachi instruments: guitar, guitarron, vihuela, violin and trumpet.”

Mariachi music is a celebrated expression of Mexican-American culture and has a devoted fan base in the United States and around the world.

Additional details about these and other previously announced 2022 U.S. stamps will be published in future issues of Linn’s Stamp News.