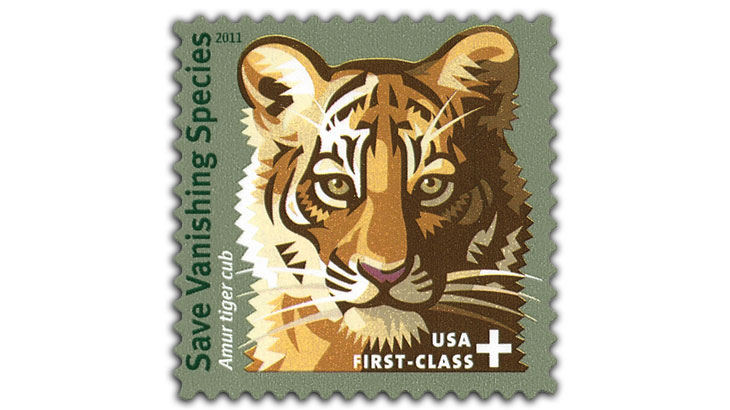 Though it was taken off sale at the end of 2018, the Save Vanishing Species semipostal is being held by U.S. Postal Service facilities awaiting a Congressional effort to reinstate sales.

The United States Save Vanishing Species semipostal stamp (Scott B4) was fully withdrawn from postal sale Dec. 31, 2018, but post offices recently were instructed to continue holding onto stocks of the nondenominated stamp that raises funds for wildlife conservation efforts.

A bill to reauthorize sales of the stamp, H.R. 1446, was introduced in Congress Feb. 28 by Rep. William Clay, D-Mo., and referred to the subcommittee on Water, Oceans, and Wildlife on March 18.

It appears to be a prudent move, therefore, to lock up the existing unsold stamps where they are while the Postal Service waits to see how Congress will proceed on this matter.

Sales of the stamps through USPS retail counters or the Stamp Fulfillment Services division currently are not allowed.

Semipostal stamps raise money for designated causes by adding a surtax to the postage price of the stamp. When it went off sale in December, the Save Vanishing Species semipostal was being sold for 65¢, with 50¢ designated for postage, and 15¢ for the conservation effort.

As Denise McCarty reported in the Dec. 10, 2018, Linn’s Stamp News, Sen. Rob Portman, R-Ohio, pushed legislation to continue sales of the semipostal at post offices nationwide through Dec. 31, 2018. The stamp returned to sale in October 2014.

The semipostal was the subject of a Postal Service sales promotion in December 2018 before it was again removed from sale at the end of that month, when the sales period designated by Congress came to an end.

Out of the initial print run of 100 million stamps, 50.7 million have been sold, raising $5.7 million for multinational species conservation.