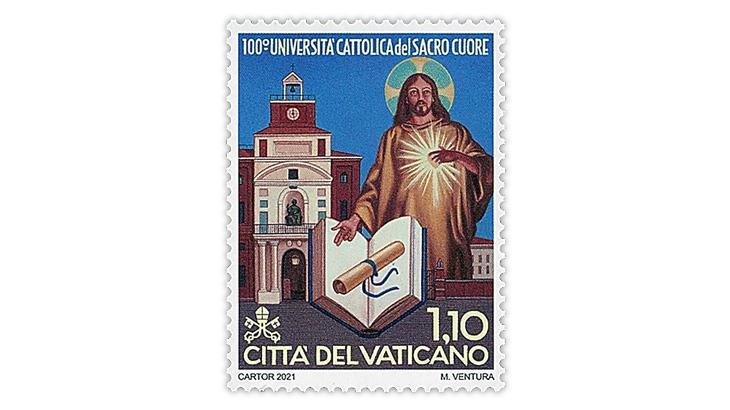 A Vatican City stamp issued Sept. 8, 2021, to mark the 100th anniversary of the Catholic University of the Sacred Heart won the St. Gabriel award for the best religious stamp of 2021. 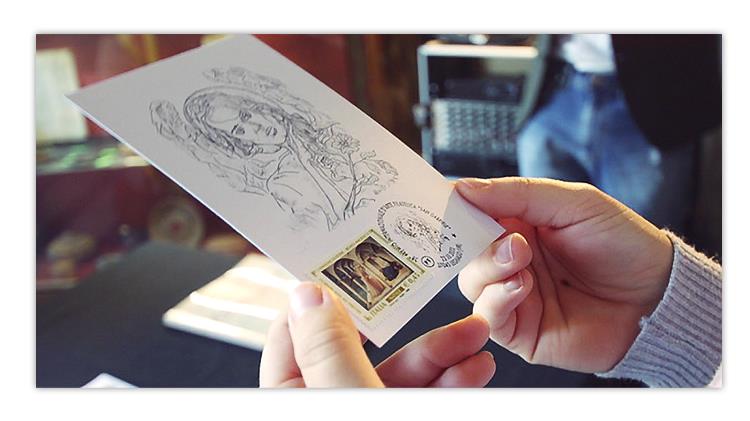 A postcard and special postmark were created for the Oct. 23, 2022, award ceremony held in Legnago, Italy.
Previous
Next

A Vatican City stamp commemorating the centenary of the Catholic University of the Sacred Heart won the St. Gabriel award for the best religious stamp of 2021. The award was presented to the stamp’s designer, Marco Ventura, Oct. 23, 2022, at Legnago near Verona, Italy.

While many previous winners of this award created in 1969 depict images of saints or angels, this Vatican commemorative features a building; the facade of the ancient monastery of St. Ambrose designed by Bramante (1444-1514) is shown on the left side of the stamp.

The building was purchased by the Catholic University of the Sacred Heart in 1927, adapted by the architect Giovanni Muzio (1893-1982) with the Christ the King sculpture by Giannino Castiglioni (1884-1971) placed in the niche above the balcony.

Shown on the right side of the stamp is an image of the Sacred Heart of Jesus inspired by the painting by Lodovico Pogliaghi (1857-1950) placed in the heart of the university’s chapel, a reproduction of which is given to all students upon graduation.

The stamp design is completed by a book, which represents knowledge enlightened by faith, and a parchment, a symbol of the academic degree achieved.

In a small space with great skill, balance and elegance, Ventura arranged and illustrated the essence of the university.

Evidently, these elements induced the members of the judging panel to select the stamp as the winner of the award.

Coming in a close second place was Portugal’s commemorative issue (Scott 4532-4354) marking the 500th anniversary of Ferdinand Magellan’s arrival in the Philippines. The set of two stamps and souvenir sheet were issued July 19, 2021..

This was the 38th edition of the award named after “the Lord’s postman,” St. Gabriel. The award was suspended for two years due to the COVID-19 pandemic. (The awards for the best religious stamps issued during the skipped years are scheduled to be presented this year.)

The 2022 award ceremony was held in the Ceramics Hall of the Fioroni Museum in Legnago. Sara Mantovani, director of the Legnago branch of Italian Post, underlined the coincidence of the award with the half-century proclamation of St. Gabriel as patron saint of the post office.

A special postmark and postcard for the ceremony were created by Marcello D’Agata, the prison inmate whose painting of the Annunciation appears on a 2018 Christmas stamp (Vatican City Scott 1700).