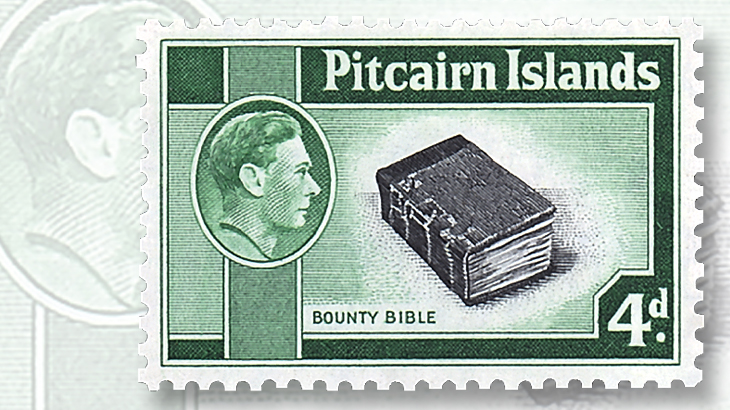 Pitcairn Islands began issuing its own stamps in 1940. One of the designs shows the Bounty Bible, believed to have been used on that ship. 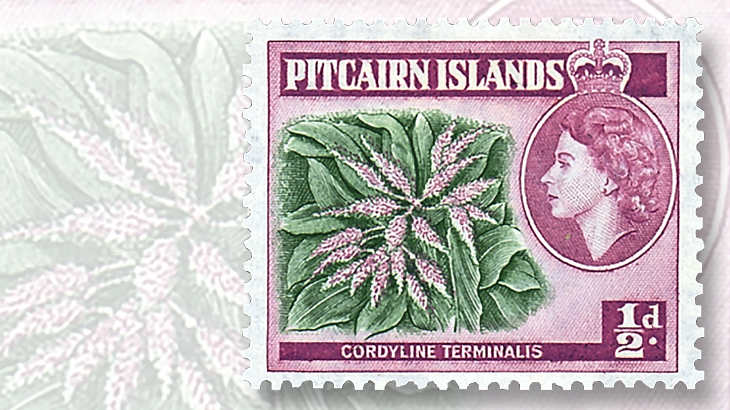 Cordyline terminalis, or ti plant, is a tropical flowering plant found in the Pitcairn Islands and depicted on a 1957 stamp. 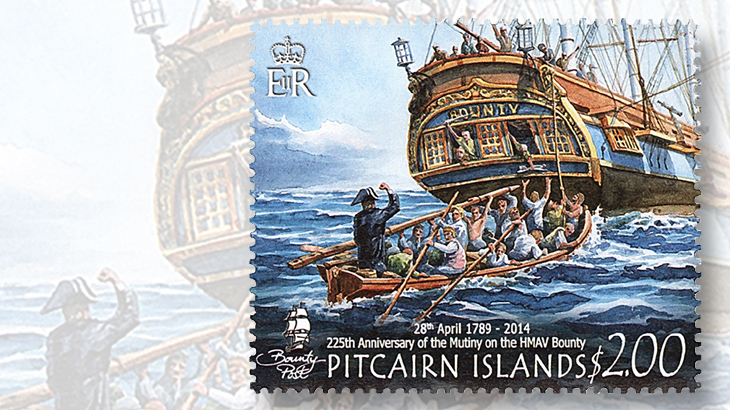 The 225th anniversary of the mutiny on the Bounty was commemorated in 2014 with a set of four stamps, including this $2 denomination depicting Captain Bligh and his loyal crew set adrift in the ship’s launch in 1789. 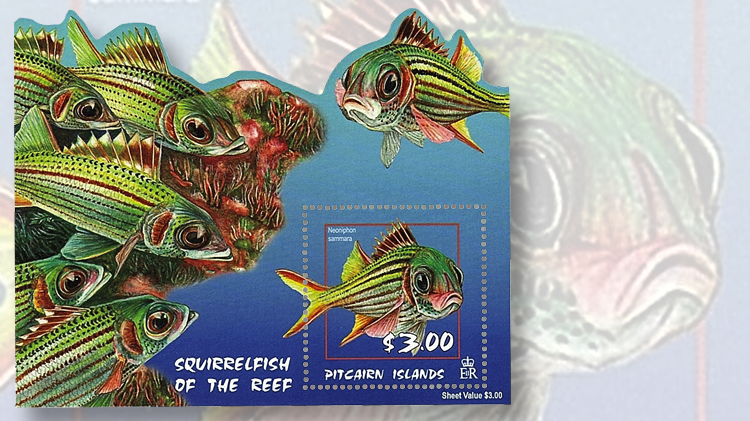 Vividly colored squirrelfish of the South Pacific swim on a Pitcairn Islands souvenir sheet issued in 2003. Four stamps featuring squirrefish were issued at the same time. 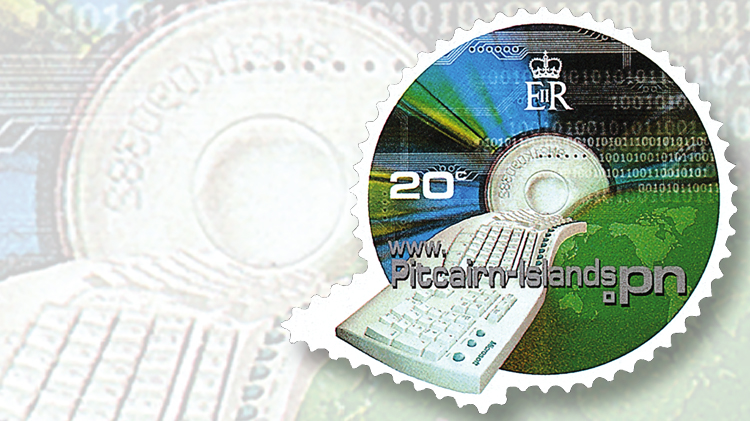 In 2001, Pitcairn Islands celebrated the assignment of “.pn” as their Internet domain suffix by issuing a set of four self-adhesive stamps. 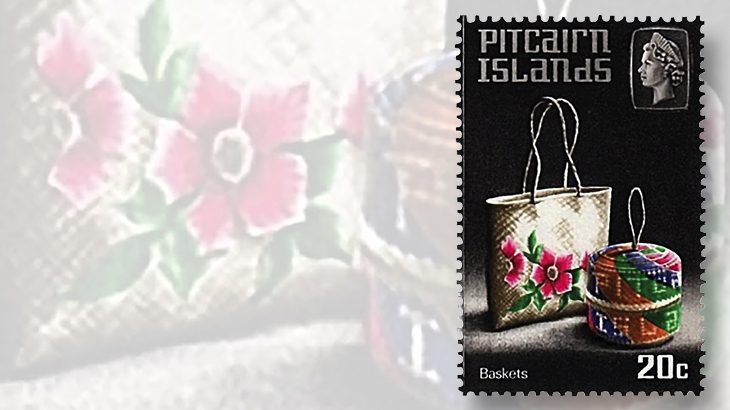 Handicrafts such as woven baskets, shown on this 1968 20¢ stamp, are both used and sold in the remote Pitcairn Islands. 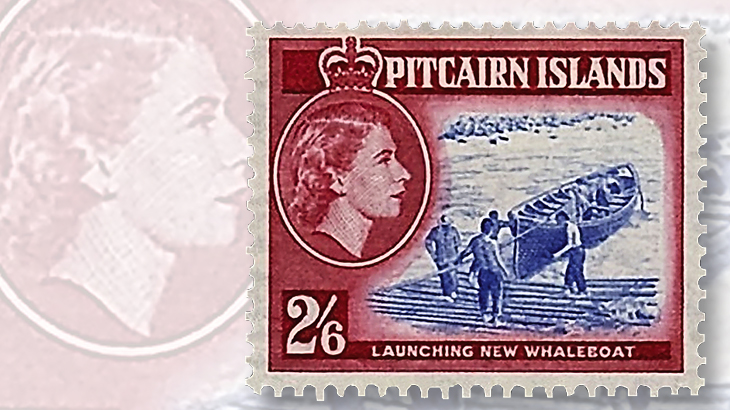 Launching a new whaleboat was one design of a set of 1957 stamps portraying local scenes from the Pitcairn Islands. 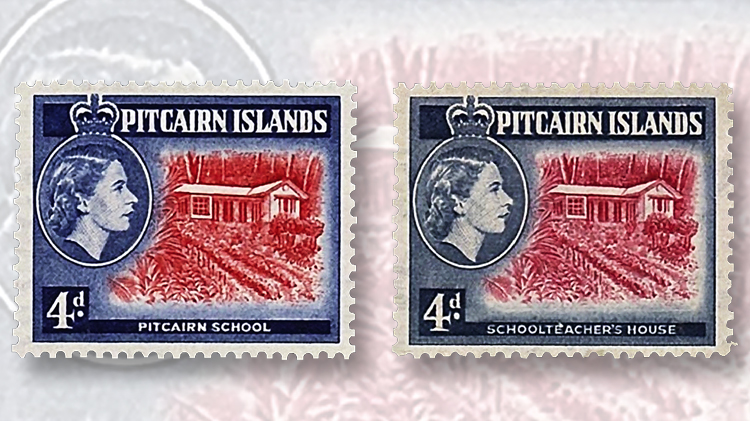 The stamp at left, issued in 1957, says the Pitcairn School is shown, but the identification is incorrect. The stamp was reprinted the next year, with a change in inscription to correctly identify the design as “School-teacher’s House.” 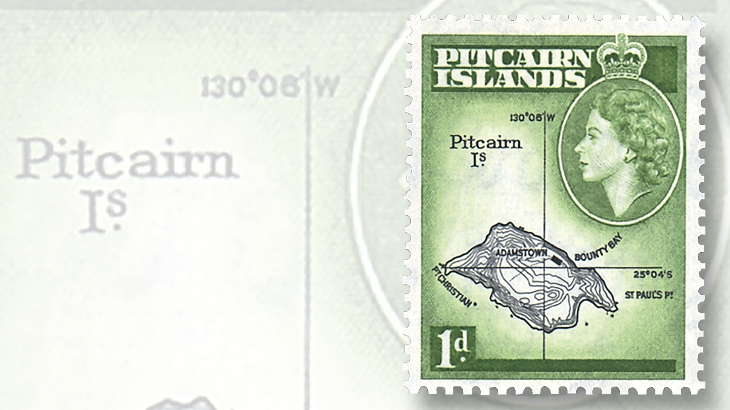 Another map design illustrating Pitcairn’s remoteness appeared on a 1957 issue. 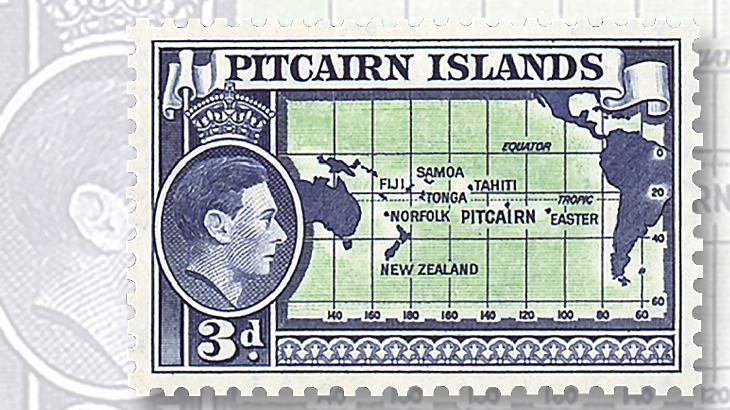 The Pitcairn Islands’ isolated location in the Pacific is evident on the map on this 1940 stamp.
Previous
Next

The Pitcairn archipelago is among a short list of well-known South Pacific islands. The archipelago consists of four islands: Pitcairn, Henderson, Ducie and Oeno.

Only Pitcairn is inhabited, and it is famous for the tale relating to the HMS Bounty (also known as HM Armed Vessel Bounty), which arrived at Pitcairn Island in January 1790 with a crew of mutineers and Polynesian travelers.

Now there are 50 Pitcairn Island inhabitants, most of whom are descendants of those who came on the Bounty. It has never been easy living on this extremely remote island. The original Bounty settlers had to find food and contrive shelter, as well as find a way to get along together.

The current islanders subsist on an economy of garden produce, fishing, handmade curios such as the baskets shown on the 1968 stamp illustrated here, and also the sale of postage stamps.

Don’t be surprised that Pitcairn relies on revenue from postage stamps; many of the world’s small, poorer countries depend on proceeds from stamps purchased by stamp collectors.

Pitcairn became a British colony in 1838, and mail carried by ships to and from Pitcairn is known to exist from the mid-19th century. These rare letters appear occasionally in auctions, and they bring a big price.

As for postage stamps, at first there was little need for them because most of the Pitcairn islanders were illiterate and letters were rarely sent.

It wasn’t until 1921 that New Zealand provided the first stamps for the Pitcairn Islands. These were standard New Zealand issues from 1915-38.

Covers with New Zealand stamps and Pitcairn postmarks are difficult to find. The good news is that it is much easier to jump in on collecting the postage stamps issued specifically for Pitcairn Islands in 1940. There were 10 stamps in the first set (Scott 1-8, plus 5A and 6A). Each stamp has an oval profile of King George VI and an image of scenes from Pitcairn.

The 1940 set of 10 (which was extended to 1951) is within the confines of a modest budget. There are a few interesting varieties that are worth investigating.

The 3d stamp (Scott 5) has a map displaying the Pitcairn Islands’ remote location in the Pacific Ocean. This issue was printed in dark blue and yellow green. Every time you see one of these stamps you should flip it over and hold it up to a light or use a watermark detector to see if the Multiple Crown and Script CA watermark (watermark 4 of the British colonial and Crown Agents watermarks in the Scott Standard Postage Stamp Catalogue) is inverted.

If it is, you have found a stamp that is rare to the point of a four-digit value.

There are also 4d stamps (Scott 5A), with a design of the Bounty Bible, thought to have been used on that ship, and 8d stamps (6A), showing the Pitcairn school, that can be found perforated with the word “Specimen.” These two specimen stamps together also have a four-digit value. Keep looking!

Pitcairn stamps issued between 1947-49 were of the common designs used throughout the British Commonwealth. These included peace stamps, issues for King George VI’s silver wedding anniversary, and others for the Universal Postal Union and the coronation of Queen Elizabeth II.

In 1957, a new set of 11 regular issues (Scott 20-30) with Queen Elizabeth’s image replaced the George VI stamps. The bicolor Queen Elizabeth stamps were recess printed by De La Rue and Co. with the Multiple Crown and Script CA watermark.

These 1957 stamps display more of what life was like in the Pitcairn Islands, and there are some interesting varieties to seek here as well.

A beautiful flowering plant, Cordyline terminalis, commonly known as the ti plant, appears on the ½d stamp (Scott 20), printed in lilac and green. This stamp and two others were reprinted a few years later, giving collectors something else to search for. The reprinted Cordyline stamp of 1963 (Scott 38) is lilac and green with a St. Edward’s Crown and CA Multiple watermark (watermark 314).

Also from the 1957 set, the 2sh 6d stamp (Scott 30) illustrates the launching of a new whaleboat, printed in magenta and ultramarine. This design was reprinted in 1959 in slightly different colors of blue and deep lake, with a St. Edward’s Crown and CA Multiple watermark. The changes in watermarks are the easiest way to understand which stamp you have: the 1957 original or the 1959 reprint.

More recent Pitcairn Islands stamps have taken up historic subjects, such as a set in 2014 for the 225th anniversary of the mutiny on the Bounty (Scott 770-773). Four flashy fish stamps, “Squirrelfish of the Reef,” were issued in 2003, accompanied by a die-cut souvenir sheet (586a).

Pitcairn Islanders are proud to have added technology to their lives, and a set of four round stamps (Scott 539-542) in 2001 celebrated the allocation of “.pn” as the islands’ Internet domain suffix. Here's their official website. This is where you can find the Pitcairn Islands Philatelic Bureau website (in Wellington, New Zealand).

Pitcairn Islands has a relatively modest stamp-issuing program. Commemorative stamps tend to be issued in sets of four, with occasional souvenir sheets as well. The colorful stamps are very informative about the island’s history, people, daily life, flora, and fauna. Pitcairn Islands, the last British Overseas Territory in the Pacific, might be a difficult location to visit, but you can enjoy collecting the stamps.