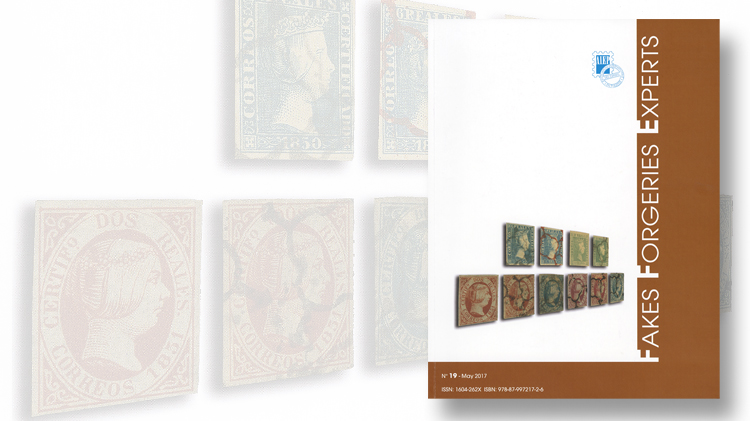 The 19th volume of Fakes Forgeries Experts brings together a group of 16 scholarly articles focused on new findings of bogus stamps and postal history, along with discussions of the analytical, forensic methods used to unmask them.

For those who study and write about philatelic chicanery, there are few higher honors than being published in Fakes Forgeries Experts, the esteemed, peer-reviewed publication of the International Association of Philatelic Expertizers (AIEP).

Begun in 1998, one volume has come out each year, with the exception of 2016; publication was suspended that year in deference to World Stamp Show-New York 2016.

Vincent Schouberechts, recently appointed as the fourth FFE editor, has assembled 16 scholarly articles touching on recent discoveries in the world of forgeries and other stamps and covers that aren’t what they appear to be.

Schouberechts follows in the footsteps of an impressive editorial trio: Paolo Vollmeier, the late Knud Mohr, and Jonas Hallstrom. An obituary for Mr. Mohr precedes the articles in this 19th edition of FFE.

Kenneth Pugh published his first article about stamp forgeries in 1977. During the course of four decades, he has become one of foremost experts on Canada and worldwide forgeries.

His article in FFE No. 19 is aptly titled “Keeping One Step Ahead of the Fakers.”

Pugh sings the praises of what he calls the “ ‘Swiss army knife’ of philatelic forensic tools”: the model 6000 H/S visual spectral comparator.

According to Pugh, just three expertizing committees worldwide have a VSC 6000 H/S in their expertizing equipment lineup: the Philatelic Foundation, the Royal Philatelic Society London, and the Vincent Graves Greene Philatelic Research Foundation.

Pugh illustrates how the VSC 6000 detected “areas of faking that glowed like a neon light” on a Canada 1857 7½-penny Queen Victoria stamp (Scott 9).

An extremely good fraud, the stamp at one time received a good V.G. Greene certificate.

Schouberechts weighs in with “How science comes to the rescue of philately … ” — an examination of what purports to be a genuine inverted overprint, heretofore unknown, on the surcharged Belgium 1920 55-centime-on-65c Termonde Town Hall stamp (Scott 143).

This forensic analysis was conducted under the careful eye of Thomas Lera at the Smithsonian National Postal Museum in Washington, D.C., according to Schouberechts.

Digital image overlays confirmed that the inverted overprint had the same dimensions as a genuine upright overprint.

Spectrophotometric analysis revealed both the inverted overprint and a genuine upright overprint to be of the same color.

“Having studied the [overprint] colour, it was necessary to confirm the authenticity of the overprint by comparing the chemical composition of the inks use,” writes Schouberechts.

Here is where the suspect stamp was exposed as a fake.

Schouberechts recalls Lera “immediately identified an anomaly in this comparative … analysis” that revealed the ink of the inverted overprint was compositionally different from the overprint ink of reference examples of Scott 143.

Toward the end of the volume is the byline of Linn’s U.S. Stamp Notes columnist John Hotchner, who weighs in with an examination of counterfeits of the U.S. 1930 $2.60 Graf Zeppelin.

Hotchner, based on review of the extant (but somewhat murky) history of these bogus $2.60 Zeppelins, favors the theory that they were first marketed and sold by, but not the creations of, Angelo Panelli, who “operated a large-scale stamp forgery business from San Remo, Italy, during the 1920s and 30s.”

As Hotchner often does in U.S. Stamp Notes when in search of additional information, he encourages readers of his FFE article to contact him.

Subjects of equal fascination and intrigue are illuminated in the other 14 articles.

Odenweller writes that the shade of the fake “was obviously wrong” and “the perforations were the wrong gauge.” Other characteristics of the forgery include “lower overall sharpness of the lines” of the design, and a background that is “distinctly different” from the genuine.

Other subjects addressed in FFE No. 19 include fakes and forgeries of the Holy Land (by Yacov Tsachor and Zvi Aloni), cancellation forgeries of Luxembourg (Lars Boettger), a study of forger Placido Ramon de Torres (Gerhard Lang-Valchs), and forged covers of the Crown stamp of the Portuguese colonies (Luis Frazao).

Copies of Fakes Forgeries Experts No. 19 are available for $76 plus $3 postage to a U.S. address from Leonard Hartmann, Box 36006, Louisville, KY 40233. For more information, email Hartmann.

For those wishing to expand their philatelic library, Hartmann can supply Vols. 1-18 as well.