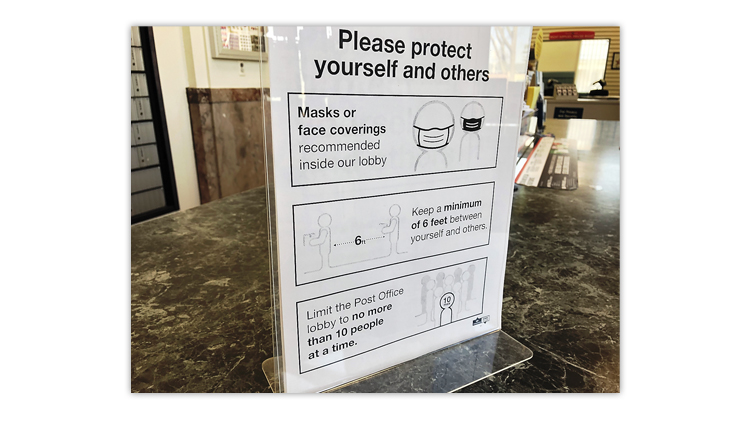 In response to the COVID-19 outbreak, some post offices in the United States are now requesting that customers wear face masks and follow social distancing guidelines.

In response to the coronavirus COVID-19 pandemic, some post offices are requesting that customers wear face masks and observe social distancing guidelines, the United States Postal Service said in an April 30 statement.

The new rules for post office lobbies vary among those states that have issued requirements for face masks.

In addition the USPS said it has revised its rules to require postal workers who don’t face the public “to wear face coverings while at work, when proper social distancing cannot be achieved or maintained.”

“In local and state jurisdictions where there is an ordinance for mandatory use of face coverings, we are voluntarily aligning by requiring that our public-facing Postal Service employees use face coverings,” said the agency’s announcement.

He also noted that the USPS has dropped a requirement that customers must sign a mobile device to acknowledge receipt of a letter or parcel.

A week after he branded the U.S. Postal Service as “a joke,” President Donald Trump hailed the work of an Ohio letter carrier as “terrific.”

Kyle West of Cincinnati was one of five Americans the president honored May 1 at the White House as heroes of the coronavirus COVID-19 pandemic.

“When the pandemic hit, West delivered a note to hundreds of older Americans on his route,” Trump said.

Trump quoted from the notes that West delivered: “If you are at risk and need help getting essential items, let me know. I will do what I can to help.

Since then, “Mailman Kyle [as West signed his notes] has received more than 400 responses, and he’s delivered vital groceries to dozens of senior citizens,” the president said.

Trump said that the 23-year-old West described his job this way: “We’re not just mailmen, we’re mechanics, movers, and many other things.  We’re part of the neighborhood.”

“Kyle talks to roughly 500 of his customers each day, bringing a cheerful smile and a listening ear to every parcel of mail,” Trump said.

The letter carrier, wearing a crisp blue uniform, responded, saying he was “greatly honored to be here to represent my fellow postal employees as we continue to provide our essential services to America.”

“Customers often — often tell us during difficult times that seeing us out every day gives them a sense of normalcy in their life,” West said.

He noted that postal workers are following the government guidelines for social distancing and wearing face masks.

“I’m very proud to work for the Postal Service and to deliver for our country,” he said to applause.

While Trump was praising West, Joe Biden, the presumptive Democratic nominee for U.S. president, took to Twitter to express his view on the U.S. Postal Service.

“The U.S. Postal Service is an essential pillar of American life,” the former vice president said in a May 3 tweet. “We simply cannot let Donald Trump destroy it.”

It was the second time that Biden has attempted to draw a sharp difference between himself and Trump on postal issues.

In a Jan. 16 post on Facebook, Biden said: “The U.S. Postal Service is an important part of American life — but Donald Trump is trying to destroy it.”

Biden, in the same Facebook post, said the Trump administration “has recommended rolling back protections for postal service workers and privatizing the USPS.”

He also said in his Facebook post that the Postal Service’s board of governors, which contains mostly Trump appointees, “will pick the new postmaster general and Trump’s plans to restructure the postal service could quickly accelerate.”

In response to President Trump’s opposition to giving the Postal Service up to $10 billion in loans, a bipartisan group of members in the House of Representatives have organized a “Postal Preservation Caucus.”

The group’s leaders declared in an April 30 letter to the leaders of Congress that their aim is to “strongly support emergency funding” for the USPS.

The letter listed four members of the House as leading the group: Carolyn B. Maloney, D-N.Y., chairwoman of the House Committee on Oversight and Reform; Peter T. King, R-N.Y.; Gerald Connolly, D-Va.; and Mark Amodei, R-Nev.

They said they intend to offer legislation that will save the deficit-laden Postal Service from being further crushed by the ongoing coronavirus crisis.

A poll financed by the American Postal Workers Union showed 86 percent of Democrats and 69 percent of independents backed an emergency appropriation for the USPS, while 48 percent of Republicans liked the idea.

A poll by the National Association of Letter Carriers showed bipartisan support for the funding, with 96 percent of Democrats, 90 percent of Republicans and 83 percent of independents favoring financial aid for the USPS.

The poll also showed the public favors giving taxpayer funds directly to the USPS over a significant increase in stamp prices.

Of those polled 92 percent favored direct funding of the postal agency, the union said.

When asked to choose between a direct appropriation and a rate increase, the margin was 78 percent to 22 percent in favor of direct funding of the Postal Service.