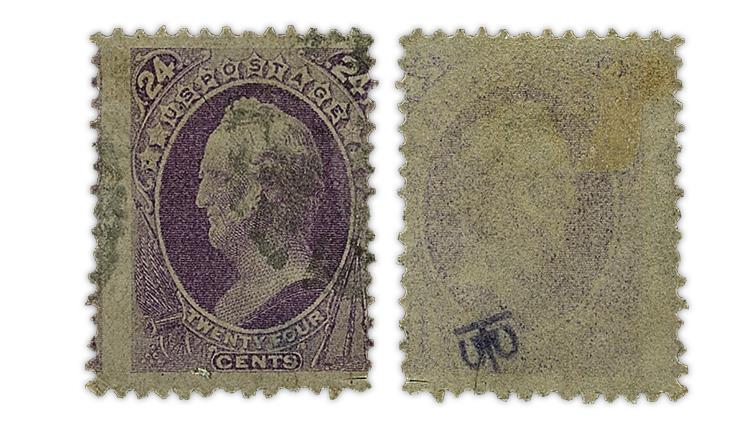 Figure 1. This 24¢ Winfield Scott stamp has beautiful color but faults that mark it as a second. The author opted to put it in his album unexpertized. 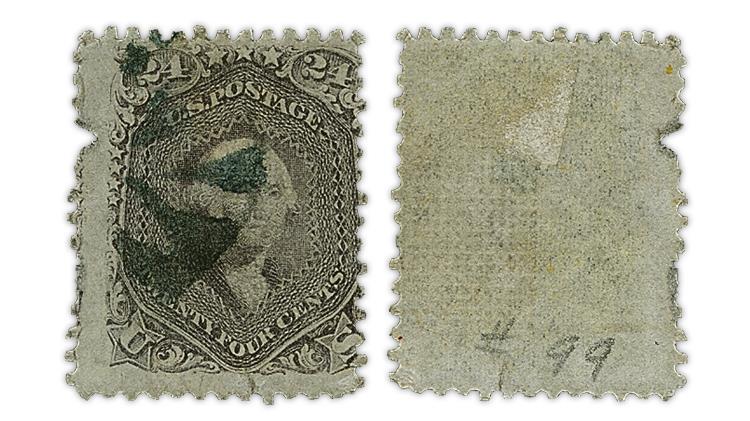 Figure 2. Sometimes the damage to which a stamp has been subjected is obvious, as with this 24¢ George Washington, but the 9 by 13 grill, if genuine, would make it scarce enough to qualify as a second. 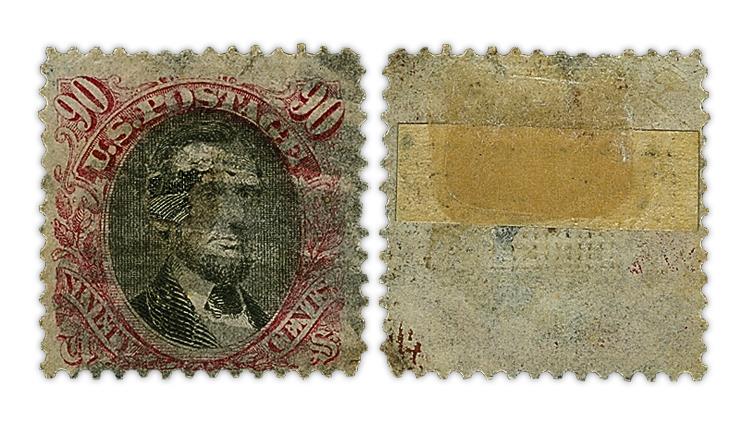 Figure 3. At first glance, this 1869 90¢ Abraham Lincoln stamp seems to be a decent second, but the author rejected it because of a major, though not obvious, fault.
Previous
Next

Should you expertize space-fillers? It’s an individual decision that depends upon the collector and the quality of the stamp in question. What factors should be weighed?

1. The collecting philosophy of the collector.

2. The catalog value of the stamp and thus the cost of expertizing.

3. The cost or predicted cash value of the stamp.

4. The nature and extent of the damage to the stamp.

5. The possibility of filling the space with a better example, which has some relationship to the depth of the collector’s checkbook.

Let’s look at each of these factors. I would guess that most stamp collectors are people of moderate means. This means that for most of us, myself included, a damaged version of a scarce and expensive stamp is a welcome addition to our album. (Yes, I am excluding those who must have perfection or nothing.) But even a damaged stamp can be subject to standards. For example, a small tear may be acceptable, while a missing corner may not.

Not all difficult-to-find stamps are expensive. So a damaged stamp with a catalog value of $25 may be treated differently by a collector than one cataloging $2,500. The latter will cost significantly more to have expertized than the former.

Would you want to be certain that a damaged stamp for which you are paying $200 is the genuine article? Would you feel the same about a $50 purchase? A $10 purchase?

If money were no object, would you even consider a damaged stamp? Maybe that’s the wrong question. Some stamps are so scarce that an imperfect example may be all that you can find at the moment, or all that you can find at a price you can afford. Perhaps as life progresses you will have more disposable income, so someday you will have an opportunity to replace that imperfect example with a better one.

Let’s apply these considerations to some examples.

The Figure 1 example does not show a detectable grill. It has a 2-millimeter cut into the stamp at the lower right edge and a vertical tear at the bottom; both are barely visible from the front. Add in that the horizontal centering is not great, but the color is better than average. The paper is not thick, nor does it seem to me to be vertically ribbed, which is a characteristic of Continental Bank Co. products such as Scott 164.

If submitted as the likely Scott 153, the cost to have it expertized could exceed the cash value of the stamp, though it is quite acceptable to me as a space-filler. I might feel differently if the color was poor and the stamp was heavily canceled. To me, this is not a candidate for expertization.

In Figure 2 we have a used 1860s 24¢ George Washington that seems to have a 9 by 13 grill, but I am not an expert. Since that would make it Scott 99, the possible catalog value is $1,500. The color is consistent with that gray lilac stamp, but it is poorly centered and has a chunk out of the left edge. Also I am suspicious about some of the perforations that indicate possible reperfing.

Because the cash value of the stamp is 10 percent or less of the catalog value and the cost to have it expertized by the American Philatelic Expertizing Service (APEX) is 3 percent of catalog value — in this case $45 plus postage — I am thinking that there is enough value added by expertizing that I would like to have confirmation that the grill is genuine.

Despite a few nibbed perfs and a heavy cancellation, it does not look too bad upon first review. But there is a piece of paper added on the reverse that is characteristic of a repair, and this is one of those stamps I would not pay 20 to 30 percent of Scott catalog value without having an expert opinion saying there is no disguised alteration.

As it turns out, that was the case. The cancellation was enhanced to disguise the fact that there is a big hole on the face of the stamp to Lincoln’s right. This points out the need for every collector who considers buying better stamps to own a 20x to 30x magnifier. It also highlights that paying for expertizing of a possible acquisition can save the buyer from making a bad purchase and spending far more than the cost of the expertizing.

Ultimately I rejected this stamp for my album. It is too badly damaged to be acceptable even as a second.

To read the rest of this column about expertizing high-value damaged stamps, subscribe to Linn’s Stamp News.