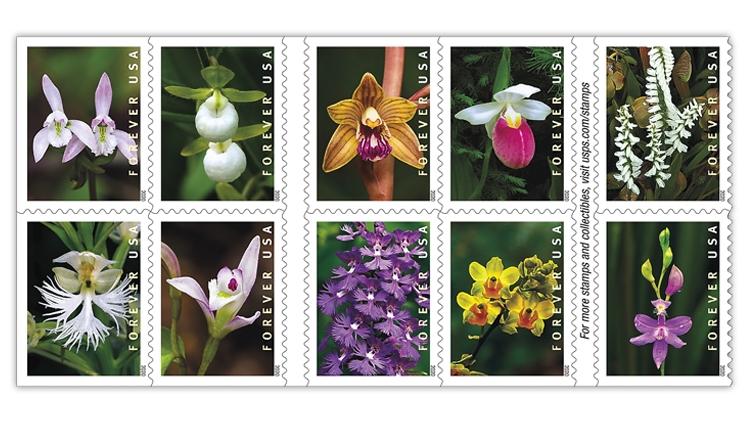 This preliminary image of the 10 United States Wild Orchids forever stamps shows the photographs of the flowers taken by Jim Fowler of South Carolina. 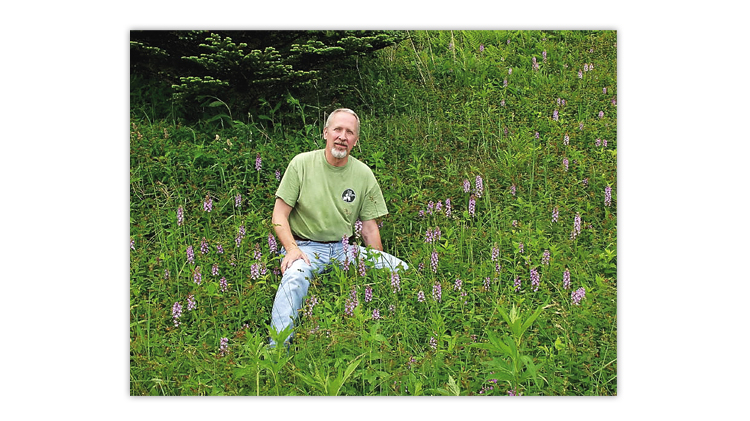 When separate hobbies intersect, it can be a positive and rewarding experience.

Such is the case for Jim Fowler of South Carolina, the man whose photos are featured on the new Wild Orchids forever stamps issued Feb. 21.

When the 2020 U.S. stamp program was unveiled in October, Fowler’s name caught my eye. I remembered corresponding with him online and trading plate number varieties on booklet, coil and sheet stamps with him in the early 2000s.

I reached out to him recently to see if my memory served me correctly and that I was thinking of the same person. To my delight it was him, so I e-mailed him a few questions about his collecting, his photography and his interest in orchids.

Do you still collect stamps?

Yes, I still collect stamps. My concentration is mainly with U.S. Revenues, although I am still interested in collecting used PNCs [plate-number coils].

I have been a photographer most of my life. My mother was an accomplished portrait photographer in the 1940s, so I was introduced to photography early on.

My interest in orchid photography began in the 1970s when a friend introduced me to some wild lady’s-slipper orchids on her property in South Carolina. That was when I got hooked on wild orchids. Thousands of photographs and two books later, I’m still hooked.

When were you first approached by the U.S. Postal Service about the possible use of your orchid photos?

I was contacted about the possible use of my photographs in March 2019, about one year before the issue date. They got my name from a botany professor friend who knew I had photographed hundreds of different North American wild orchid species.

He was originally approached by a USPS contact that suggested the theme and who had mocked up a selection of Phalaenopsis orchids that are native to Asia. These are the orchids which are available at the local grocery stores and big box hardware stores.

My professor friend did not like that idea, and he suggested concentrating on wild orchids which are found in North America. He suggested my name as a contact for photographs, and that’s how I became involved.

How many photos did you supply the Postal Service with, or did they request the images that are shown on the new stamps?

The original idea was to produce 20 different orchid images on a stamp product. I don’t know if it was to be a sheetlet or booklet. After much discussion, it was decided that it would be less expensive to produce a double-sided booklet of 10 images. I later found out that the stamp images would also be issued in a coil format of 3,000 and 10,000 for mass mailers of first class (forever) postage items.

The stamp design team had access to more than 10,000 of my orchid images on my online Flickr photostream. Only after they had made the original selection of 20 images did I make some suggested changes to their selection.

I knew they were interested in orchid flowers that showed contrast with the background, and which would work well with stamp-sized images. They were also interested in having the flowers appear in their natural, outdoor setting. That’s what we ended up with.

Do any of your family members also collect stamps?

My son collects PNCs, and he is quite excited about this stamp issue.

Do you plan on doing anything special in collecting this stamp issue?

I will be attending the first-day ceremony at the headquarters of the American Orchid Society in the Fairchild Tropical Botanic Garden in Coral Gables, Florida, on Friday, Feb. 21. Hopefully, I will be able to make a couple of sets of first-day covers for myself and my son at the event.

Is there anything else readers might find interesting about you or this stamp issue?

This is a “trifecta” for me: stamps, orchids, and photography. It couldn’t get any better!

For more information about Fowler and to see photographs he has taken, visit his website.