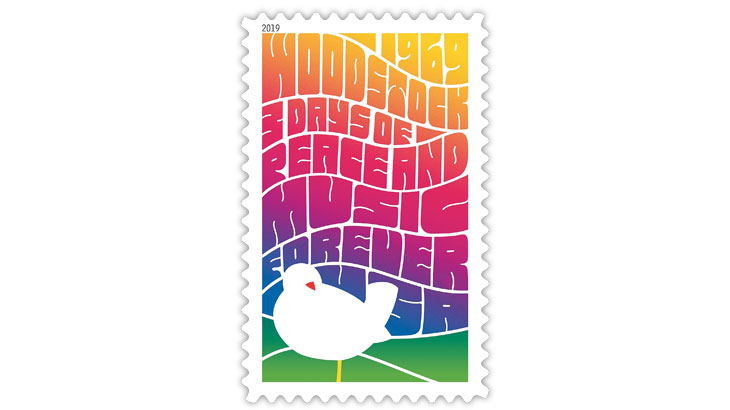 A United States forever stamp commemorating the 1969 Woodstock festival will be issued Aug. 8, with a first-day ceremony in New York City. 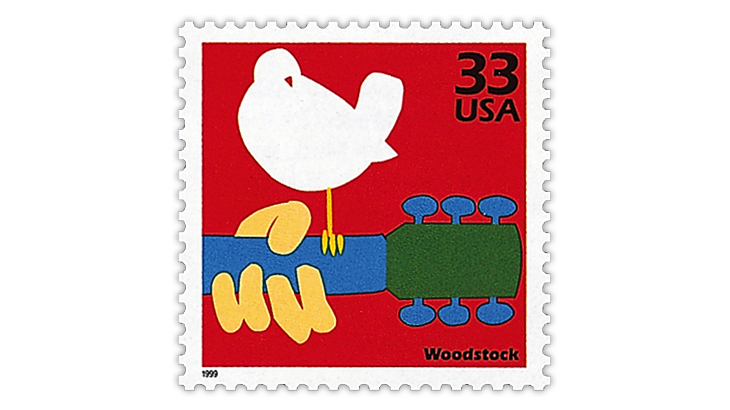 A 33¢ Woodstock stamp was issued in 1999 as part of the Celebrate the Century series. Like the new commemorative, this earlier stamp shows the dove from designer Arnold Skolnick’s 1969 Woodstock poster. 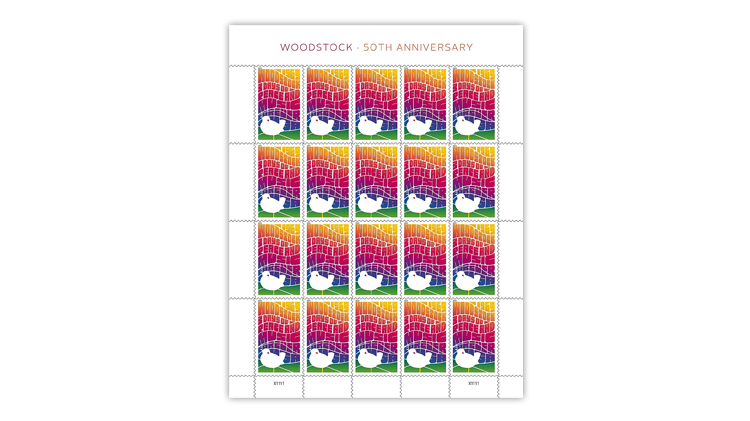 The new Woodstock stamp will be issued in a pane of 20, with a simple banner across the top that reads “WOODSTOCK 50TH ANNIVERSARY.” 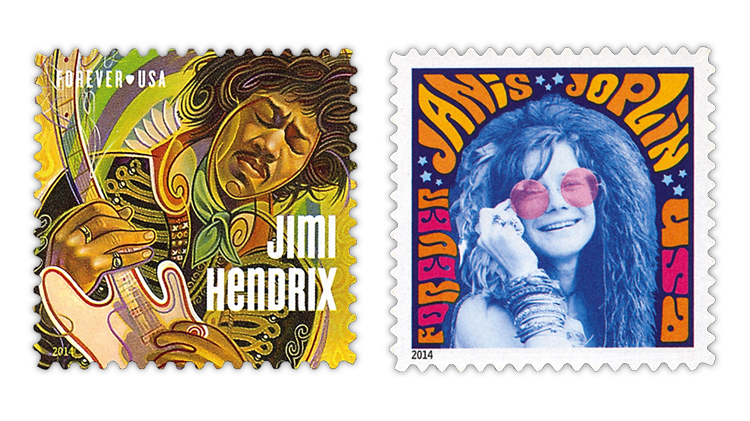 Jimi Hendrix and Janis Joplin, two performers at the 1969 festival, were commemorated on individual forever stamps in 2014. 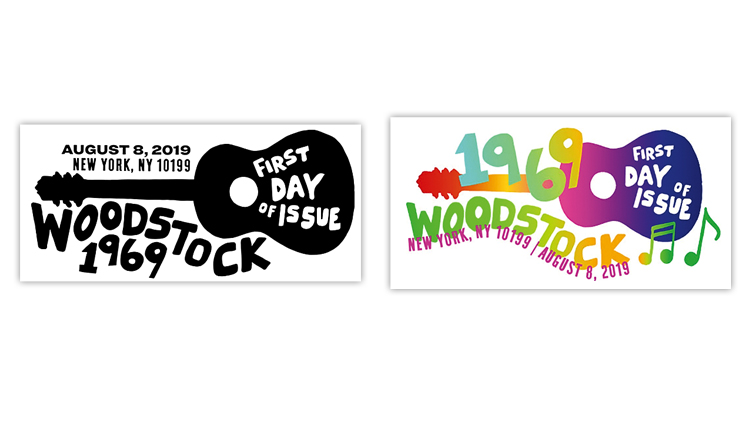 An acoustic guitar is shown on the pictorial first-day cancels offered for the Woodstock forever stamp.
Previous
Next

The United States Postal Service is issuing a forever stamp Aug. 8 to commemorate the 50th anniversary of the 1969 Woodstock Music and Art Fair.

The gradient rainbow typography on the nondenominated (55¢) stamp, designed by USPS art director Antonio Alcala, evokes graphics associated with the youth culture of the late 1960s, such as the lettering on posters promoting rock concerts.

The stamp’s lone pictorial element is the white dove from the original 1969 poster announcing the Woodstock festival. That poster, designed by Arnold Skolnick, advertised the event as “3 days of Peace and Music,” and that phrase also appears in the design of the new stamp, just below “1969” and “Woodstock.”

The “Forever” designation and “USA” complete the wording on the stamp.

The new stamp is the second U.S. issue to directly commemorate Woodstock, one of the largest-ever festival gatherings at that time it was held, with attendance estimates approaching half a million people.

A 33¢ Woodstock stamp was issued Sept. 17, 1999, as part of the 1960s set in the Celebrate the Century commemorative series (Scott 3188b). That square stamp shows the white Woodstock peace dove perched on the neck of an acoustic guitar near the fingers of the guitarist, all elements from Skolnick’s 1969 poster.

A first-day ceremony for the new stamp will take place Aug. 8 at 11 a.m. at the Metropolitan Museum of Art, 1000 Fifth Ave., in New York City.

Some details of the first-day ceremony were still being determined in mid-July.

“The first day of issue ceremony is open to all Metropolitan Museum of Art visitors, although tickets are required,” USPS senior public relations representative Sara Martin told Linn’s Stamp News. “USPS will have a limited number of tickets available on a first-come, first-served basis.”

Additional information about those tickets and the ceremony participants would be forthcoming, according to Martin.

The new stamps are printed by flexography on Banknote Corporation of America’s Gallus RCS press, according to technical details provided by the Postal Service.

This is the second known use of the Gallus combination press to print U.S. stamps. The first was the offset-printed Transcontinental Railroad set of three issued May 10, which includes metallic foil accenting the artwork (Scott 5378-5380).

Flexography, which uses a flexible printing plate with raised images, has not been commonly used to print U.S. stamps. The plate is affixed to a rotating cylinder to print the prepared design directly onto the paper. For a number of years, flexography has been used to print some U.S. postal stationery.

The new Woodstock postage stamp is being issued in a pane of 20 with a simple banner at top that reads “WOODSTOCK 50TH ANNIVERSARY.”

Originally planned as a three-day festival, the Woodstock Music and Art Fair was held Aug. 15-18, 1969. Bouts of severe weather delayed some performances and extended the gathering into the morning of Aug. 18.

It took place on farm property in Bethel, N.Y., near White Lake, in a large field leased to fair promoters by 49-year-old dairy farmer Max Yasgur.

Woodstock is known for its lineup of popular musicians and groups crossing a wide spectrum of music genres including rock, blues, folk and jazz.

Nearly all of the 30-plus acts that performed at the 1969 festival are considered legends today, including Santana (led by guitarist Carlos Santana), which had not yet released its first album when the group played its Saturday afternoon set, and the Who, riding the worldwide success of the rock opera Tommy, which had been released three months before Woodstock.

Many Woodstock performers have since been inducted into the Rock and Roll Hall of Fame, including Creedence Clearwater Revival; Crosby, Stills and Nash (who performed with Neil Young, another hall of fame honoree); the Paul Butterfield Blues Band; Jefferson Airplane; Joan Baez; the Grateful Dead; the Band; Sly and the Family Stone; and John Sebastian.

Hendrix was the final performer of the festival, and his set was the longest. Most acts played between 30 minutes and 90 minutes, but Hendrix and his band were on stage for more than two hours.

The festival was expected to draw about 40,000 people, but attendance was 10 times that or more. Despite the enormous number of people filling an open area with inadequate facilities, the event was generally peaceful.

A film documentary of the festival titled Woodstock and directed by Michael Wadleigh was released by Warner Bros. in 1970. More than three hours long, it includes music performances from the festival, interviews with performers and footage of those in attendance.

Woodstock quickly became a milestone in American music history and lent its name to the term Woodstock Nation, identifying those who attended the event and all counterculture adherents of the baby-boomer generation.

The Postal Service has created two similar pictorial first-day cancels for the Woodstock forever stamp, one in black and the other in color.

Both postmarks show an acoustic guitar, the name “Woodstock” and the year date “1969.” The color postmark uses bright rainbow coloration similar to that appearing on the forever stamp.