The post-World War I Schleswig plebiscite and the stamps that honored it, explained 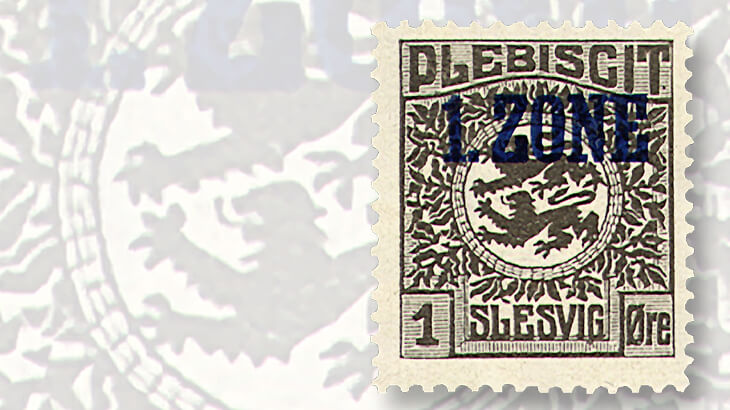 Following the vote Feb. 14, 1920, the Schleswig plebiscite stamps were reissued in new denominations in Danish ore and kroner and with the overprint “1. ZONE.” 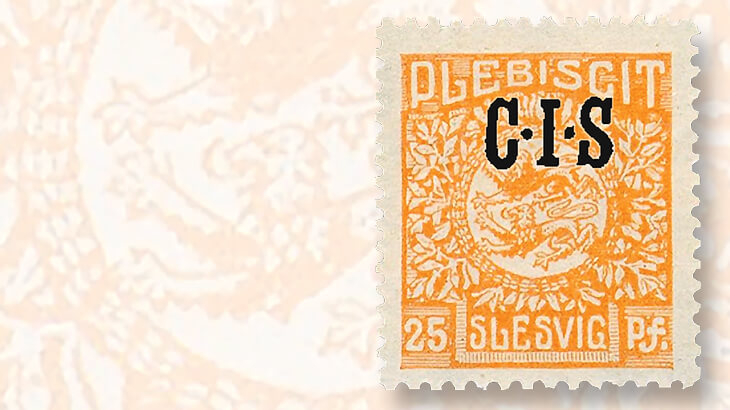 Plebiscite stamps were overprinted to serve as Official stamps by the government within Schleswig. 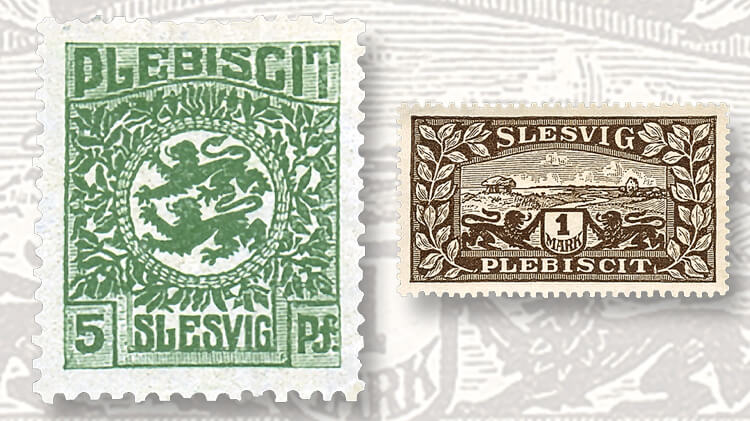 Two designs were used for the first issue of Schleswig. The lower denominations feature the coat of arms of the plebisite, and the high-denomination stamps show a view of Schleswig.
Previous
Next

One of the objectives of the Treaty of Versailles, which officially ended World War I, was to make it possible for areas of mixed ethnicity to determine their national affiliation.

To achieve this objective, various plebiscites were held in Europe under the auspices of the League of Nations.

A plebiscite is defined by Merriam Webster’s Collegiate Dictionary as “a vote by which the people of an entire country or district express an opinion for or against a proposal, especially on a choice of government or ruler.”

A number of disputed areas were placed under the temporary administration of the Inter-Allied Control Commission, pending the plebiscites.

The Grand Duchy of Schleswig was part of Germany but with a mixed German and Danish population. Located at the southern end of the Jutland Peninsula, Schleswig originally had been a Danish province.

Section XII, articles 109 to 114, of the Treaty of Versailles called for a plebiscite to determine the future border in Schleswig between Denmark and Germany.

The process was to be monitored by a commission (Commission Interalliee Slesvig) with representatives from France, the United Kingdom, Norway, and Sweden. France strongly supported the plebiscites because they believed that the probable loss of some portion of Schleswig to Denmark would weaken Germany.

The Schleswig plebiscite area was divided into two zones: Zone 1, the northern and largest part of Schleswig, was populated by a majority of ethnic Danes, and Zone 2, in the middle of the region, consisted of about 80 percent Germans. There was a third zone to the south, but because the region was primarily populated by ethnic Germans, no vote was taken.

Special stamps promoting the upcoming vote were issued for most areas where plebiscites were to be held. Postage stamps were ideal because they were visual, inexpensive, and widely disseminated.

To advertise the upcoming Schleswig plebiscite, 14 stamps of two designs were issued Jan. 25, 1920, under the direction of the commission.

The fact that the stamps are denominated in German currency but inscribed in Danish is likely due to the commission wanting to appear impartial in its promotion of the plebiscites.

Additionally, the 14 stamps were overprinted “CIS,” the abbreviation for “Commission Interalliee Slesvig,” which oversaw the plebiscite.

Posters also were widely used to promote the plebiscites.

The plebiscite for Zone 1 (northern Schleswig) took place Feb. 14, 1920, with the result that three-quarters of the population voted for a return to Danish rule, although a small German majority existed in several towns.

Therefore, northernmost Schleswig, renamed Southern Jutland, was returned to Denmark June 15, 1920 (the transfer of Northern Schleswig to Denmark was the only one of the German transfers of territory after World War I that would not later be disputed by the Third Reich).

On July 10, 1920, as part of an extended celebration of the return of northern Schleswig, King Christian X of Denmark crossed the border at Frederikshoj for the first time, purportedly riding a completely white horse.

On May 20, after the vote, the Schleswig plebiscite stamps were reissued in Zone 1 with new denominations in Danish ore and kroner and overprinted “1. ZONE.” These stamps (Scott 15-28) were used until June 1920, when they were replaced with Danish stamps.

The second plebiscite, in Zone 2 (central Schleswig), took place March 14, 1920, and resulted in 80 percent of the vote being in favor of remaining with Germany. Zone 2 and the southern part of Schleswig are part of the present-day German state of Schleswig-Holstein.