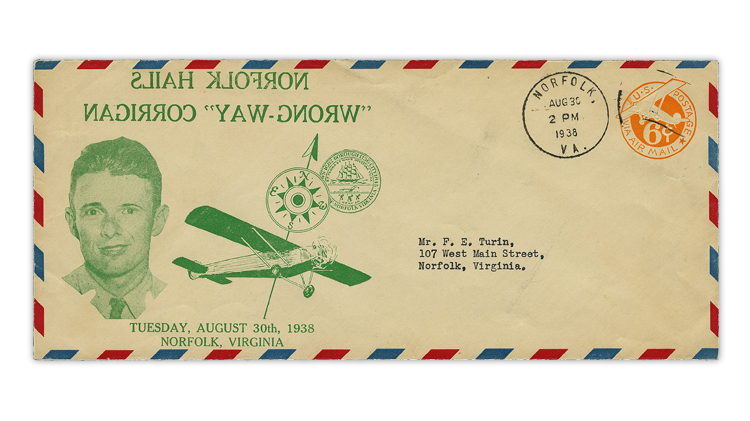 An audacious and illegal trip to Ireland by pilot Douglas Corrigan in 1938 landed him in the record books, but it also required that he concoct what turns out to be a flimsy excuse for heading across the Atlantic when his filed flight plan had him returning to California from New York.

This was the stunt that resulted in his being known forevermore as “Wrong Way” Corrigan. The pictured airmail cover canceled in Norfolk, Va., on Aug. 30, 1938, salutes his journey.

After flying to New York from California on July 9, 1938, Corrigan filed a flight plan for return to Long Beach, Calif., on July 17. He left at 5:15 a.m. to the east, and instead of circling back toward California, he just kept going. He landed at Baldonnel Aerodrome, County Dublin, Ireland, on July 18, after a 28-hour, 13-minute flight.

The fake flight plan had been made necessary by the repeated official denial of his applications to fly over the Atlantic to Ireland. The reason given for the denials was that his plane was not airworthy enough to make the flight.

When questioned after the flight, Corrigan claimed that his mistake was because of a navigational error caused by heavy cloud cover that obscured landmarks and low-light conditions that caused him to misread his compass.

He never acknowledged that he set out that morning intending to fly to Ireland, but the weight of the evidence makes it all but certain that his actions were not a mistake at all, but a deliberate effort to accomplish his dream.

After the flight, aviation officials from the Bureau of Air Commerce sent a 600-word telegram to Corrigan listing the regulations broken by his flight. But the punishment ultimately handed down was a slap on the wrist: His pilot’s certificate was suspended for only 14 days.

Corrigan and his plane returned to New York on the steamship Manhattan, arriving on Aug. 4, the last day of his suspension. He received a hero’s welcome and a New York ticker tape parade.