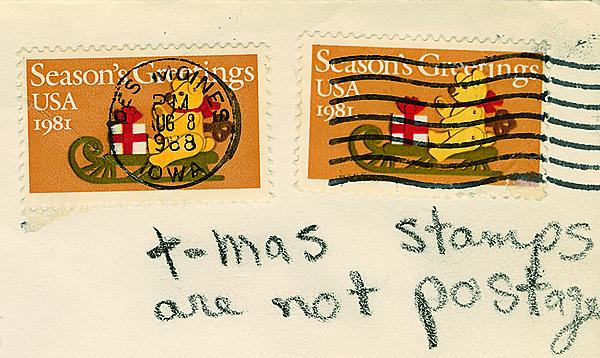 Would you have allowed this cover to proceed in the mails despite the lack of a face value on the two Christmas stamps? The postage is valid. Issued in 1981, the stamps have an assigned value of 20¢. 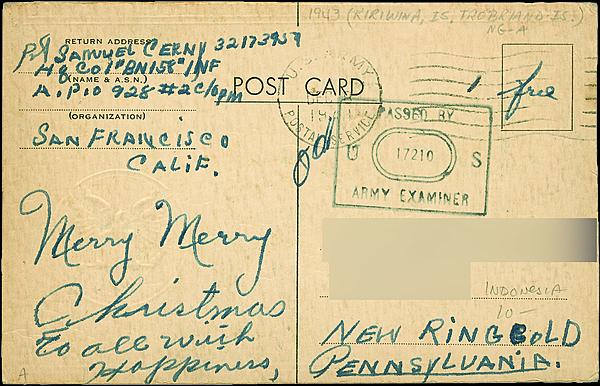 A military-provided yuletide greetings postcard enabled American soldiers during World War II to send thoughts home for Christmas. This card, shown front and back, was sent in 1944, from APO 928-2, Kiriwina Is 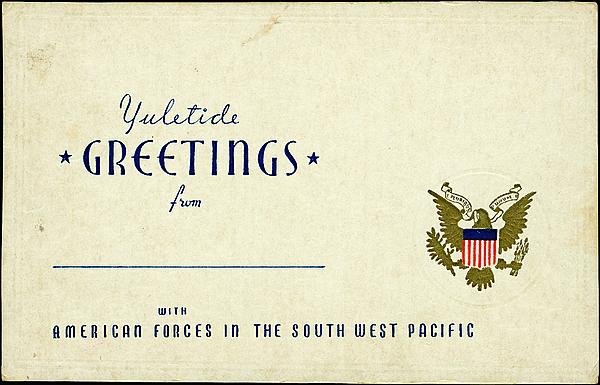 A military-provided yuletide greetings postcard enabled American soldiers during World War II to send thoughts home for Christmas. This card, shown front and back, was sent in 1944, from APO 928-2, Kiriwina Is

This is one of the smaller locations occupied by Allied forces: Kiriwina Island, the largest of the Trobriand Islands, part of Papua New Guinea. Allied forces landed on Kiriwina June 30, 1943, and U.S. Army engineers began constructing a 6,000-foot coral-surfaced runway that became the home to No. 73 Wing of the Royal Australian Air Force.

Despite the fact that the invasion force numbered over 2,000, and APO 928-2 operated for the remainder of World War II, it is a difficult APO to find.

The back of the card includes a censor marking.

The front reads “Yuletide Greetings From” and “with American Forces in the South West Pacific.”

A blank line appears between the two phrases for the sender’s name. In this case, the sender did not write his name on the line.

It appears the envelope shown nearby was one that needed 45¢ in postage. The sender tried to comply, franking the envelope with the 1970 6¢ Edgar Lee Masters stamp (Scott 1405) and with two examples of the 1981 nondenominated (20¢) Christmas stamp showing a felt bear on sleigh (1939).

However, the postal clerk who handled it apparently thought the two Christmas stamps were some sort of seal, an honest mistake since there is no value printed on them.

The clerk wrote “x-mas stamps are not postage” in pencil, and handstamped the envelope “postage due__,” filled in with “39c,” having credited the 6¢ stamp.

The two stamps showing the teddy bear were genuine U.S. postage, issued Oct. 28, 1981, but intentionally produced without a stated value.

The U.S. Postal Service had applied for a rate increase from the then-current 18¢. At the time when these Christmas stamps had to go to press, the Postal Service did not know if the rate increase would be approved, another amount substituted, or if either of these events occurred, what the effective date would be.

But seven years is a long time, and either a new clerk or one who had forgotten these nondenominated stamps mistakenly treated them as labels.