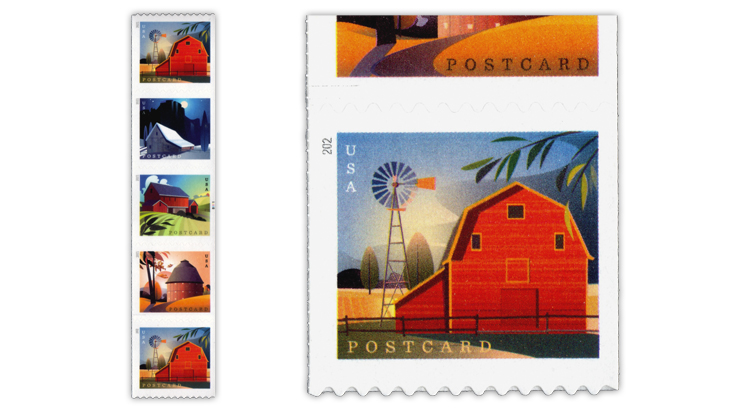 An observant collector from Maryland recently discovered a flaw in the 2021 year date on one of the four United States nondenominated (36¢) Barns postcard-rate coil stamps issued Jan. 24. The flawed year date reads “202” because the “1” is missing. As see

A United States nondenominated (36¢) Barns postcard-rate coil stamp has been discovered with a flaw in the 2021 year date in the top left margin. Specifically, the year date is missing the “1,” so it reads as “202.”

Edward Mann, an eagle-eyed collector from Maryland, alerted Linn’s Stamp News about his discovery on Aug. 13.

Mann told Linn’s that he had purchased a few rolls of 100 of the four different Barns coils stamps (Scott 5550-5553) at a local post office. The Barns coil stamps and their four counterparts with the same designs printed in panes of 20 (5546-5549) were issued Jan. 24.

In each of the rolls that Mann bought, the flaw occurs on the Gambrel Roof Barn coil (Scott 5550) two positions below the center Forebay Barn coil (5552) bearing plate number B1111, as shown on the vertical plate number strip of five Barns coil stamps pictured here.

A close-up of the Gambrel Roof Barn stamp with the flaw, cropped from the plate number strip of five, also is shown.

The Gambrel Roof Barn stamp at the top of the illustrated strip has a normal 2021 year date.

According to Mann, each of the three rolls yielded three plate number strips of five with the bottom Gambrel Roof Barn stamp showing the “202” year date flaw.

Linn’s editors have examined six rolls of Barns coils stamps. None of them contained a Gambrel Roof Barn stamp with the flawed “202” year date.

To learn more about how the flaw occurred, Linn’s contacted Roy Betts, a spokesman for the U.S. Postal Service, who provided the following reply from USPS Stamp Services:

“The Postal Service has determined with our printer [Banknote Corporation of America] that this issue was caused by a problem with a blanket on press. A blanket is the rubber cylinder that transfers the image from the metal plate to the paper.

“Parameters employed with a new automated inspection system did not detect the defect, but has since been adjusted to avoid this type of occurrence in the future.”

The “202” year date flaw occurred in about 2 percent of the Barns coil print run, Betts said.

To Linn’s knowledge, this is the first time a flaw in a year date has occurred on a U.S. stamp. The first U.S. stamp to show a year date was the 32¢ Florida Statehood Sesquicentennial stamp issued March 3, 1995.

Based on the information at hand, the Scott editors have determined that this “202” year date flaw will likely receive a catalog listing.

“This flaw will most likely be listed as an unlettered minor variety in the 2023 edition of the Scott Standard Postage Stamp Catalogue, Vol. 1, to be published in April 2022,” said Scott catalog editor-in-chief Jay Bigalke.

“We decided not to rush a decision on a possible listing for the 2022 Scott Specialized Catalogue of United States Stamps and Covers, which was on deadline as this story broke.”

The 2022 Scott U.S. Specialized catalog is scheduled for publication in October.