Year of the Rabbit stamp to arrive Jan. 12 in San Francisco 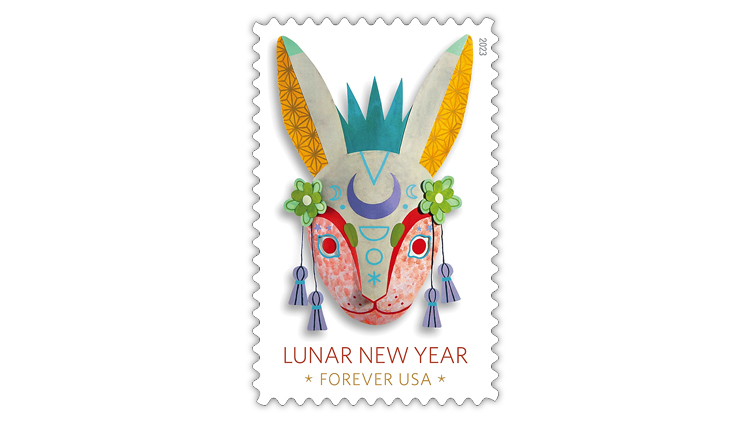 The Year of the Rabbit forever stamp to be issued Jan. 12 in San Francisco features an ornate three-dimensional ceremonial mask by Camille Chew. It is the fourth issue in the United States Postal Service’s Lunar New Year series that began in 2020.

Collectors desiring to attend the ceremony are asked to register with the Postal Service. Each attendee may invite a maximum of four guests, the USPS said.

Derek Kan, a member of the Postal Service’s board of governors, will dedicate the new nondenominated (60¢) Year of the Rabbit forever commemorative stamp.

Like the 2020 Year of the Rat (Scott 5428), 2021 Year of the Ox (5556) and 2022 Year of the Tiger (5662) stamps, the new nondenominated (60¢) Year of the Rabbit forever stamp features an ornate three-dimensional ceremonial mask by Camille Chew. Her intricate artwork was photographed and then used for the vignette of the stamp designed by USPS art director Antonio Alcala.

The rabbit design was shown previously as one of 12 simple sketches in the margin of the stamp pane for the 2020 Year of the Rat stamp. That pane was pictured on page 16 of the March 9, 2020, issue of Linn’s Stamp News.

Chew’s rabbit mask is rendered in hues of blue, yellow, purple, green, red and pink. Red, pink and purple are considered lucky colors for those born during the Year of the Rabbit. A pair of stylized tassels dangles from a floral accent on either side of the rabbit’s head. Geometric patterns are visible on the animal’s ears while crescent moons and other symbols decorate the forehead and nose.

The rabbit’s mouth is curved into what looks like a gentle smile suggesting calmness and peace.

“Calling to mind the elaborately decorated masks used in the dragon or lion dances often performed in Lunar New Year parades, this 3-dimensional mask depicting a rabbit is a contemporary take on the long tradition of paper-cut folk art crafts created during this auspicious time of year,” the Postal Service said.

According to China Highlights, a tour company: “People born in a year of the Rabbit are called ‘Rabbits’ and are believed to be vigilant, witty, quick-minded, and ingenious.”

“The sign of Rabbit is a symbol of longevity, peace, and prosperity in Chinese culture. 2023 is predicted to be a year of hope.”

The online China Travel Guide offers additional insights about the Year of the Rabbit:

“For Chinese people, the rabbit is a tame creature representing hope and life for a long time. It is tender and lovely.

“The moon goddess Chang’e in the Chinese legend has a rabbit as her pet, which stimulates the thought that only this creature is amiable enough to match her noble beauty.

“Another way of saying is that the Rabbit is the incarnation of the moon goddess per se and it is always a symbol of pureness and auspiciousness.”

Chew is creating the designs for all of the stamps in the current Lunar New Year series of 12.

Stamps marking the Lunar New Year are popular with collectors and mailers worldwide.

The new stamp was printed by six-color offset lithography with accents in gold and teal foil.

Year of the Tiger stamp to debut Jan. 20 in New York