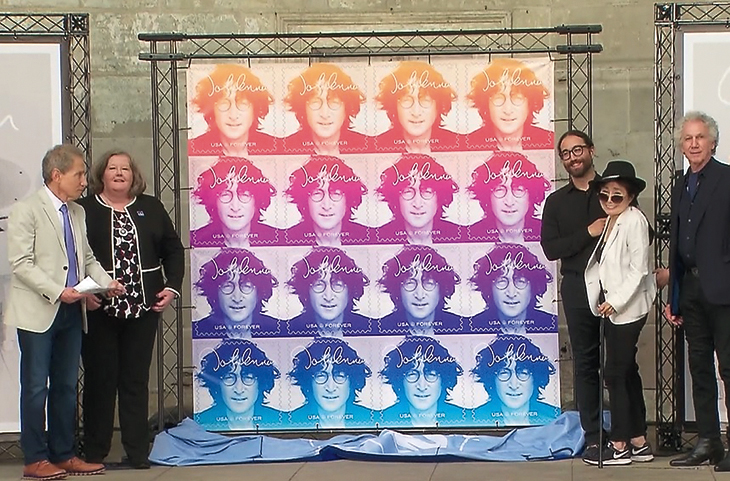 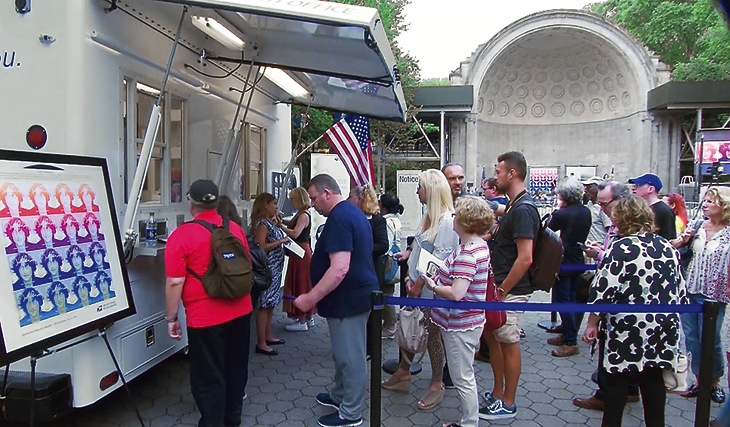 In the video for his 1973 hit Mind Games, John Lennon dances and sashays through his beloved Central Park, greeting children and a zoo elephant, at one point jumping onto the deserted stage of the Naumburg Bandshell in a mock performance for an audience of one — himself, cleverly intercut.

On Friday, Sept. 7, that same stage was occupied by his widow, Yoko Ono; together with their son, Sean Ono Lennon; Postmaster General Megan J. Brennan; the veteran rock photographer Bob Gruen; and radio disc jockey Dennis Elsas as they unveiled a pane of 16 forever stamps honoring Lennon and his contributions to music, culture and the worldwide peace movement.

This time, the outdoor audience numbered at least 350 invited guests, media reporters and curious passersby undiscouraged by the overcast and muggy weather.

Beyond the guest seating area, which was filled well past overflowing, two United States Postal Service trucks offered the new stamps and first-day covers, while staff in a nearby tent serviced items with commemorative cancellations.

Elsas, who moderated the 45-minute event, was the first to speak. After introducing the New York Police Department color guard and Shereen Pimentel, the singer of the national anthem, Elsas went on to recount how, in 1974, he landed his now-legendary WNEW-FM radio interview with Lennon, which lasted two hours and revealed many never-before-heard stories and tidbits about Lennon and the Beatles.

Elsas, who is still an active DJ on New York’s WFUV, remained friends with Lennon until the musician’s death in 1980.

A large video screen played the vintage four-minute clip for Mind Games, and although its scenes have long been familiar to fans, watching it on location with Lennon’s family was clearly an emotional experience for many in the crowd — as was the playing of Lennon’s video for Imagine at the ceremony’s conclusion.

Brennan was the next to speak. She talked briefly about the importance of the cultural contributions that landed Lennon a spot in the ongoing Music Icons series of commemorative stamps.

She said: “He was also a stamp collector and an avid letter writer. He was able to see the world through the stamps he collected,” and was “an enduring advocate for peace.”

Lennon’s childhood stamp album was purchased by the Smithsonian Institution’s National Postal Museum in 2005, and is once again on display at the museum until Feb. 3, 2019.

As the blue covering was dropped from the giant mock-up of the new Lennon stamps, the crowd burst into applause.

The colorized photograph of Lennon that is featured on the stamps — in four different gradations from orange to red, red to violet, violet to purple and purple to blue — was taken by Gruen, a photographer who has made hundreds of iconic images of musicians and celebrities over his nearly half-century career.

Gruen took the stage after Brennan and recounted how his mother had taught him photography when he was young, and said she had also collected stamps all her life.

He said he never dreamed that one day, one of his photographs would wind up on a stamp.

Gruen said he first met John and Yoko at a benefit performance by Aretha Franklin, had taken a few pictures that they liked, and was later invited to take some publicity shots for Lennon’s 1974 album Walls and Bridges. These included the image used on the new stamps, as well as the famous photographs of Lennon on his rooftop, skyline behind him, wearing the “New York City” T-shirt that Gruen had given him.

Sean Lennon spoke next. He was just 5 years old when his father was gunned down in 1980 by a deranged fan outside their apartment at the Dakota, on Central Park West at 72nd Street, a short walk from where the stamp ceremony took place.

Now 42 and an accomplished musical artist in his own right, Sean crossed the stage with a loping gait remarkably reminiscent of his father’s.

He began by telling how the English like to say that to be born English is to have won the lottery of life, but that his father’s adoption of New York as his home showed he disagreed with that aphorism.

Turning serious, the younger Lennon continued: “My father and mother came to New York as immigrants. He famously fought very hard to get his green card.”

He did so, Sean said, because he believed fervently in the American ideals of democracy and free speech.

Throughout the 1970s, John Lennon battled the authorities to be allowed to remain in the United States. The FBI and other agencies feared he might encourage young people to experiment with drugs, and under President Nixon were wary of his activism against the Vietnam War.

In a nod to that activism, the new stamp includes a tiny peace symbol between the words “USA” and “Forever” in the inscription.

Sean Lennon concluded by introducing his mother. Now 85 years old and visibly frail, she needed the help of her son and Gruen to walk across the stage to the podium.

Her voice was faint and hard to make out at times, but her determination and enthusiasm were palpable.

“I like this ‘USA Forever,’ I don’t know who thought of it,” she joked. “When John died, I said there is going to be no funeral for John, because John is going to be forever.”

Evidently wowed by the turnout, she continued: “Even if it was five or 10 people, I would have appreciated it, but look at this!”