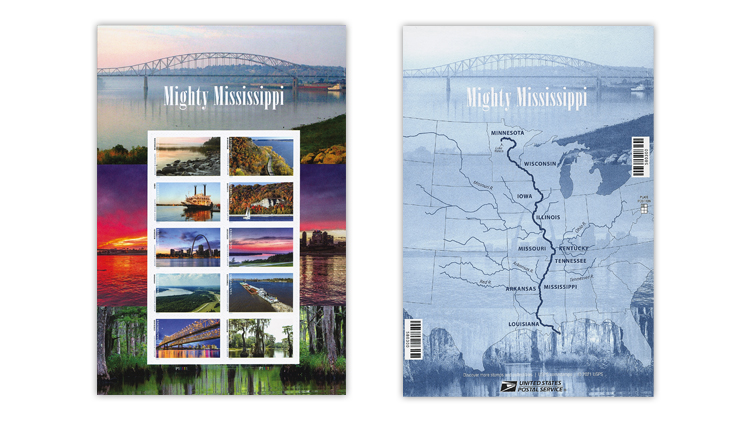 The front and back of the pane of 10 Mighty Mississippi forever stamps.

Yoopers, Michiganders from the Upper Peninsula, won’t be thrilled to learn that the United States Postal Service accidentally joined it with Wisconsin on the back of a pane of stamps issued in May 2022.

A pane of 10 Mighty Mississippi commemorative forever stamps (Scott 5698) showing photographs from each state that the Mississippi River traverses (Minnesota, Wisconsin, Iowa, Illinois, Missouri, Kentucky, Arkansas, Tennessee, Louisiana and Mississippi) was issued May 23, 2022. A map on the reverse of the pane shows the state outlines and the lines of the Mississippi River and other rivers that flow into it.

Unfortunately, the state line between Wisconsin and Michigan’s Upper Peninsula was left out.

Pam Hoffman, who pointed out the mistake to me on Jan. 13, said, “I’m sure Wisconsinites like you are pleased, but Michiganders like me are not amused.”

When asked by Linn's, USPS senior public relations representative Jim McKean said: “The United States Postal Service commissioned a map for the verso side of the Mighty Mississippi pane focused primarily on the Mississippi River and its tributaries. The initial map was based on a U.S. Geological Survey map, and the state lines were added later in the design process. The state line between Wisconsin and upper Michigan was omitted at that time.

“We regret the omission of that portion of the state border.”

The design mistake appears on all 4 million stamp panes, of which many have likely been sold. As of Jan. 18, the stamp pane is still available from Stamp Fulfillment Services via its online store.