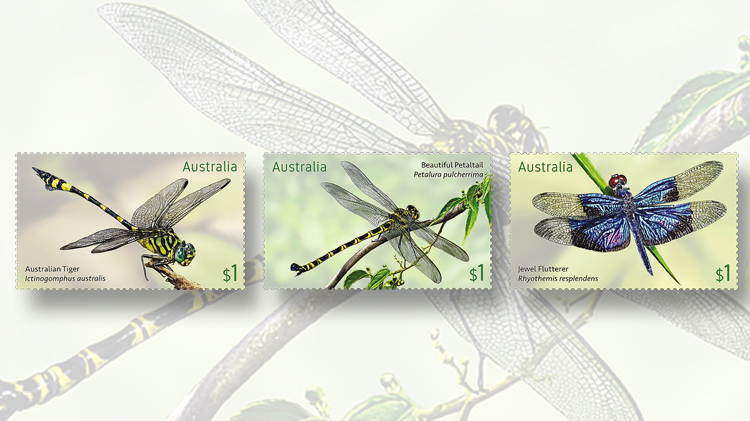 The three other dragonflies pictured on stamps in Australia’s Dragonflies issue are the Australian tiger, beautiful petaltail, and jewel flutterer. 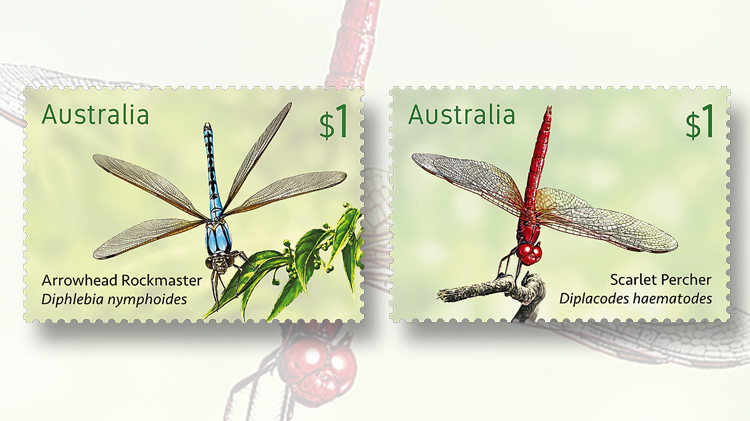 This year, Australia Post is celebrating Stamp Collecting Month in August, and is kicking off the month by issuing five Dragonfly stamps and a souvenir sheet Aug. 1.

Previously, Australia’s month devoted to stamp collecting was in October.

Australia Post introduced its Stamp Collecting Month in 1993, and has issued stamps each year with a special theme that appeals to children and is educational as well.

Several of these stamps have featured animals, including dinosaurs on the first Stamp Collecting Month issue (Scott 1342-1349) and endangered wildlife in 2016 (4537-4548).

On the website for the month, Australia Post said, “Stamp Collecting Month (SCM) provides an exciting way for middle to upper primary school students (and their teachers) to engage with interesting themes through stamps.”

According to Australia Post, there are approximately 6,000 species of dragonflies in the world, and 325 of them are found in Australia.

This blue damselfly can be found in rivers and streams in southern Queensland, coastal New South Wales and Victoria.

Dragonflies and damselflies are cousins, belonging to the same order Odonata, which means “toothed ones.” The suborders are Anisoptera, dragonflies; and Zygoptera, damselflies.

In general, damselflies are smaller than dragonflies, their wings are evenly sized, and their eyes are separated.

The dragonflies featured on the new stamps vary in size and color.

The scarlet percher (Diplacodes haematodes) is a little more than an inch long, with a wingspan of 2 inches. While the male of this dragonfly is red, the female is a pale yellow.

The Australian tiger (Ictinogomphus australis), named for its yellow and black stripes, is a large dragonfly approximately 3 inches in length, with a wingspan of 4 inches or even a little more.

The jewel flutterer (Rhyothemis resplendens) is named for its appearance. Australia Post said: “Its two pairs of proportionately large wings are coloured with panels of spectacular metallic blue, with areas of deeper blue at the back edge; the wrinkled metallic surface scatters the light, enhancing the species’ visibility.”

This small dragonfly is less than an inch in length, with a wingspan of 1.5 inches to 2.3 inches.

Owen Bell created the illustrations of the dragonflies for the stamps, and Jo Mure was in charge of the product design.

Australia Post reported all the designs show male dragonflies because they often have more spectacular colors than the females.

The Scarlet Percher and Arrowhead Rockmaster stamps measure 37.5 millimeters by 26mm, and the other three are 50mm by 30mm each.

The firm EGOtrade printed the stamps by offset lithography.

Australia Post is offering the stamps in several formats, including a souvenir sheet including all five of the stamps, sheets of 50, coils of 100, and booklets of 10 and 20.

The address for the Australia Stamp Agency in North America is 1 Unicover Center, Cheyenne, WY 82008-0010.