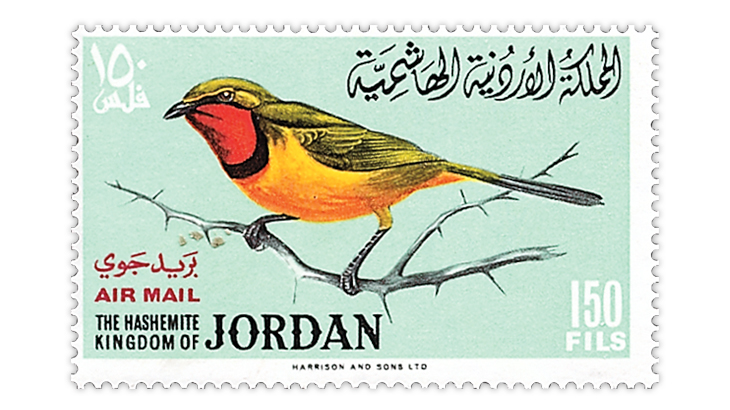 The Hashemite Kingdom of Jordan lies in southwestern Asia on the east bank of the Jordan River. It was ruled by the Ottoman Turks until the Arab Revolt of 1916 during World War I. After the war, it was established as a monarchy under the Hashemite dynasty, but mandated to Great Britain by the League of Nations.

The stamps of Jordan have a following in the United States. It is a stable country with a moderate stamp-issuing policy. Many of its stamps are also popular with topical collectors.

On Dec. 18, 1964, Jordan issued a set of three Bird airmail stamps (Scott C26-C28). The colorful birds depicted on the stamps are the gorgeous bush shrike, the ornate hawk eagle and the gray-headed kingfisher.

The Scott Standard Postage Stamp Catalogue values the set in mint never-hinged condition at $235. A set in used condition is valued at $123.

This set is popular and in demand in mint never-hinged condition with bird topical collectors. The set is a good buy in very fine grade in the $150 to $200 price range. Sets in lesser grades sell at a big discount from catalog value.