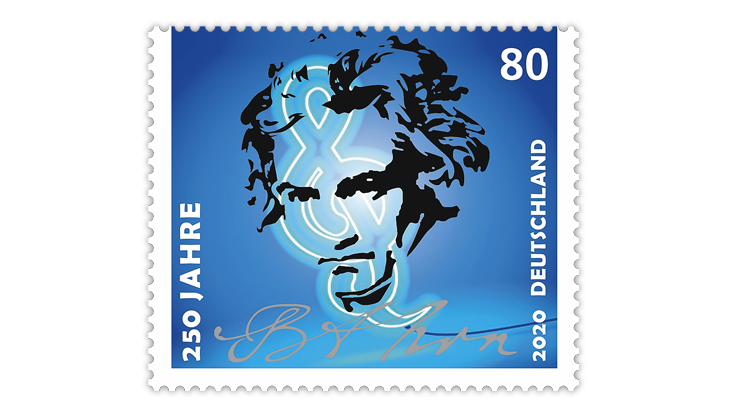 Germany honors the 250th birth anniversary of Beethoven on this €0.80 stamp issued Jan. 2. The design shows the composer’s face superimposed over a musical G clef. 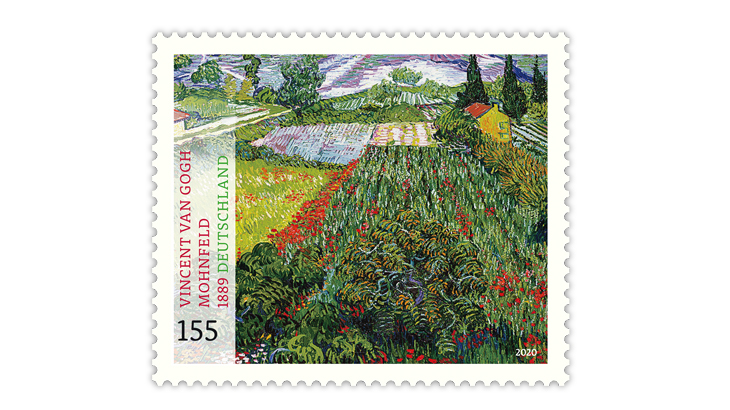 A new stamp in the Treasures from German Museums series features Van Gogh’s Field with Poppies, purchased by the Kunsthalle Bremen in 1911.
Previous
Next

An €0.80 stamp celebrates the 250th birth anniversary of Beethoven. Considered one of the world’s greatest composers, he was born in December 1770 in Bonn, Germany.

The stamp design features a stylized portrait of Beethoven superimposed over a musical G clef. His autograph appears at the bottom of the design.

A €1.55 stamp reproducing a painting by Dutch artist van Gogh (1853-90) is part of the Treasures from German Museums stamp series.

The stamp shows Field with Poppies, painted in Saint-Remy-de-Provence in southern France in 1889.

The purchase of this vibrantly colored painting by the Kunsthalle Bremen (an art museum in Bremen, Germany) in 1911 created controversy, because some German artists of the time were against the display of French Impressionism in German museums.

A €2.70 commemorative marks the 150th anniversary of sculptor, graphic artist and writer Ernst Barlach, who was born Jan. 2, 1870, in Wedel, Holstein. The design of the stamp is based on a bronze war memorial, often described as a hovering angel, that Barlach created for a Lutheran church in Gustrow, Germany.

For ordering information and details about other recent German stamps, visit the webshop of Deutsche Post.