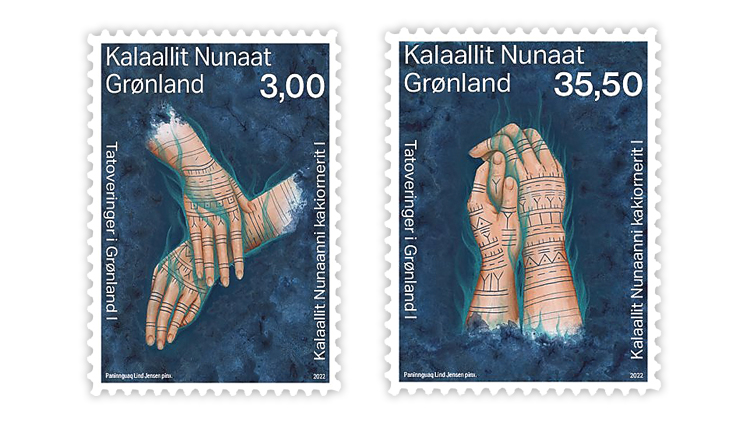 The stamps are denominated 3 kroner and 35.50k and feature women’s hands with traditional Inuit tattoos.

“Traditional Inuit tattoos are making a comeback in Greenland,” Pertti Frandsen of Tusass Greenland said in the August 2022 issue of its new-issue magazine for collectors, Greenland Collector, “Some use the tattoos as cultural markers while others get them for completely different reasons.”

Traditional Inuit tattoo artist Maya Sialuk Jacobsen, who is from Greenland, discussed tattoo practices in a Sept. 28, 2019, article by Knud Fl. Larsen in Sermitsiaq, a national newspaper in Greenland. Jacobsen said that Indigenous men could have tattoos, but it was mostly women who were tattooed. The article said that traditionally it was usually mothers who tattooed daughters.

“The different tattoos always had a meaning,” Jacobsen said. “Among other things, it could be that they had to make the game animals friendly or define the individual’s role as a woman. It could also be amulets that were tattooed. The many different rules of living were important.”

Jacobsen said that traditionally tattoos were done with tendon thread colored with soot or plant dyes. Needles made from bird bones could also be used.

“The spirituality and powers residing in the tattoos are the essence that I experience as a traditional tattooist, which is very rewarding in itself,” Paninnguaq said. “So, it was important for me to include this in the paintings [which are reproduced on the stamps].”

These are the second and third stamps Paninnguaq designed for Greenland. Her debut stamp was the International Year of Indigenous Languages commemorative issued in 2019 (Scott 821).

Lowe-Martin of Canada printed the new Tattoo Art in Greenland stamps by offset in sheets of 20 (two panes of 10, one of each stamp). The issue also includes a souvenir sheet featuring the two stamps and a background photograph showing a woman’s tattooed hands.

The new Tattoo Art in Greenland stamps can be purchased online through the Tusass Greenland website.