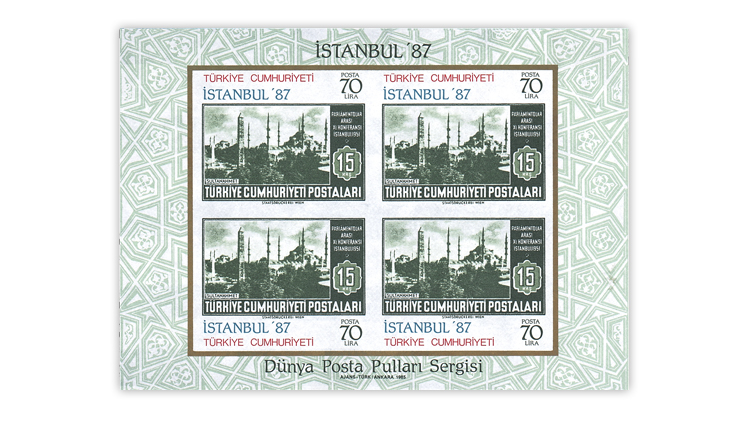 The Nov. 28 issue of Linn’s Stamp News just landed on the presses and goes in the mail to subscribers Monday, Nov. 14. And if you subscribe to Linn’s digital edition, you’re at the head of the line with early access Saturday, Nov. 12. While you wait for your issue to arrive in your mailbox, enjoy these three quick glimpses of exclusive content available only to subscribers.

A history of Constantinople through stamps

Rick Miller, in Stamps of Eastern Europe, provides a colorful and engaging lesson on the history of Constantinople. He sets the stage by recalling a 1953 song titled Istanbul (not Constantinople) by the Canadian vocal group the Four Lads. He then travels back 500 years to begin his lesson with the fall of Constantinople in 1453, an event that he says “was arguably the most traumatic human-caused event in European history between the sacking of Rome in 410 and the cataclysm of World War I in 1914-18.” One of the stamps Miller pictures is a Turkish 1953 2½-lira souvenir sheet featuring Sultan Mehmed II, who at the age of 21 led the Ottoman Turks in their 1453 conquest of Constantinople. There is much more to learn, so be sure to give Miller’s column your full attention.’

Take some time to read Lloyd de Vries’ tribute to Boonton, N.J., letter carrier Mark Berman in First-Day Covers. De Vries notes that Berman is a recent new member of the American First Day Cover Society who enjoys creating thank-you cards for his customers who give him a gift at Christmas. According to de Vries, Berman has been collecting FDCs for many years, the result of collecting stamps in his youth and his graphic arts background. De Vries also gives some suggestions for possible combination FDCs for some of the upcoming U.S. stamps to be issued in 2023.

In each weekly issue of Linn’s, either E. Rawolik VI or E. Rawolik VII dissects the contents of a stamp mixture offered to collectors. E. Rawolik is a pseudonym that is also the word “kiloware” (a stamp mixture) spelled backward. This week, E. Rawolik VII runs the numbers on a sample from a packet of 500 off-paper worldwide stamps. Among the findings were stamps from 17 countries. An 1891 15-bani King Carol I stamp from Romania was the oldest issue, while the most recent was a 2003 Bermuda stamp picturing Queen Elizabeth II in her coronation carriage. Overall, Rawolik was pleased with what he found, writing that the seller “accurately described his product” and “gave a few more stamps than promised.” Enjoy the full review.