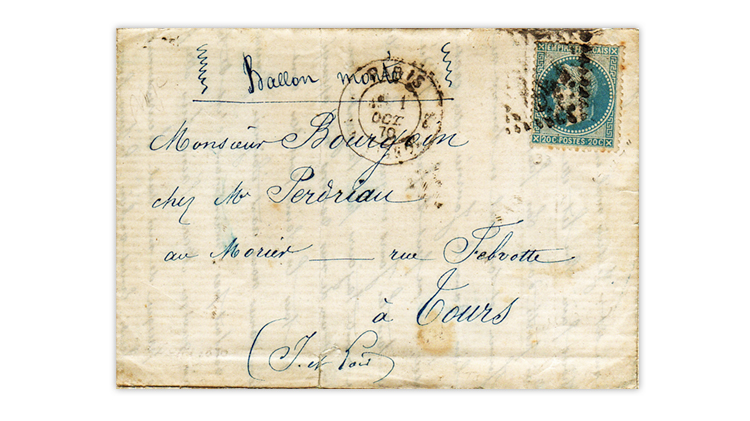 In Philately of France in the Oct. 19 issue of Linn’s Stamp News, Larry Rosenblum explores a key philatelic aspect of the 1870-71 Franco-Prussian War: the use of balloons to facilitate communication from Paris with the outside world.

The Oct. 19 monthly issue of Linn’s Stamp News just landed on the presses and goes in the mail to subscribers Monday, Oct. 5. And if you subscribe to Linn’s digital edition, you’re at the head of the line with early access Saturday, Oct. 3. While you wait for your issue to arrive in your mailbox, enjoy these three brief reviews of exclusive content available only to subscribers.

Larry Rosenblum draws readers into his Philately of France column with this engaging opener: “Sending messages by air to get around, or more accurately, over the Prussian siege of Paris in 1870-71 is the story of ingenuity, persistence and bravery in the face of adversity.” To provide needed context, Rosenblum reviews the political background dating back to the 1789 French Revolution. He also provides a quick summary of events that set the stage for France’s clash with Prussia. When the Franco-Prussian War broke out, the trapped Parisians turned to balloons to gather intelligence and send communications to the outside world. The decision was a natural one because the French had invented balloon travel in 1783. Included with the column is a table summarizing the balloon flights during the siege. Readers will want to keep this reference handy while absorbing the details of the flights presented in Rosenblum’s fascinating story.

Postal reform and the Penny Post in Great Britain, part 1

In Unveiling Classic Stamps, Sergio Sismondo begins his exploration of the Penny Post in Great Britain by reminding readers that for the better part of two centuries before the world’s first adhesive postage stamp, the Penny Black, was issued in 1840, the cost to mail a letter “was a great deal more than 1 penny in postage for a very large proportion of all mail — so much more in some cases that many people never received or sent a letter in their lives because they could not afford the postage.” In this first part of a two-part review, Sismondo traces the successes and failures of various efforts to develop a uniform British Penny Post system. As you read, you will be introduced to attorney John Hill and his influential 1659 pamphlet that advocated strongly for postal reform. Other notable personalities include Henry Bishop (who developed an early postal marking named after him) and Charles Povey, who opened a local post in London named the Half-Penny Carriage. Keep an eye out for part 2, which will focus on postal reformer Roland Hill.

Many of Europe’s principal rivers originate in Switzerland, and as Richard T. Hall explains in Swiss Stamp Scene, the Swiss are experts when it comes to bridge construction. This expertise is revealed on numerous Swiss stamps that depict bridges. Hall begins with his personal favorite: the Salginatobel Bridge linking Schiers and Schuders in the canton of Graubunden. Built in 1930, the bridge is featured on a semipostal stamp issued in 2003. A 1953 semipostal pictures the so-called Devil’s Bridge that dates to 1595. A legend involving the devil and a goat figures prominently in the history of this bridge. Two covered wooden bridges shown on Swiss stamps, the Chapel Bridge and the bridge connecting Stein in the canton of Aargau with Bad Sackingen in Germany, are superlatives for different reasons. You’ll have to read the column to discover what makes them stand out.