Worth a second look: doing double takes at your stamps is a good habit 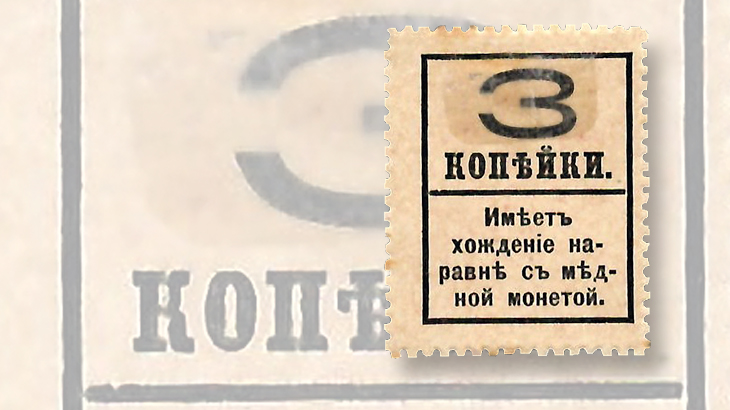 The reverse side of the stamp in the first illustration has a Cyrillic explanation indicating that the 1917 “stamp” was now paper currency. 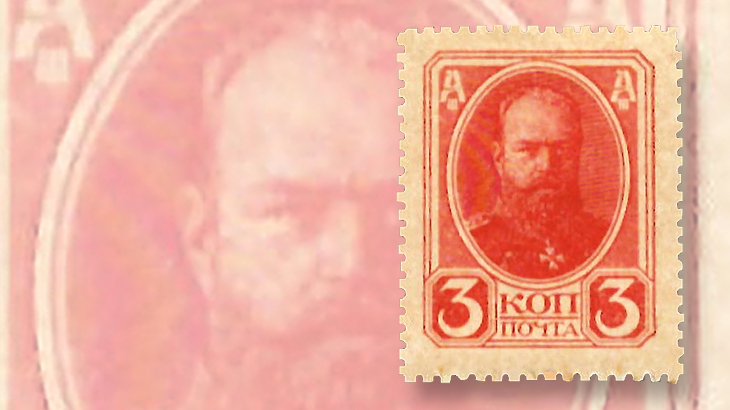 Czar Alexander III appears on this Russia stamp, at first glance making it appear to be the 3-kopeck issue of 1913. However, a second glance shows this stamp was printed on cardstock. 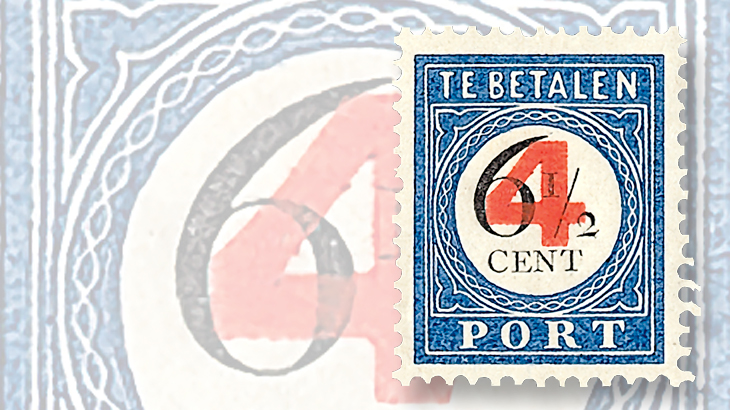 Over time, rather than issuing new postage due stamps as rates changed, the Netherlands surcharged existing issues, such as this 1909 stamp with a 4¢ surcharge. 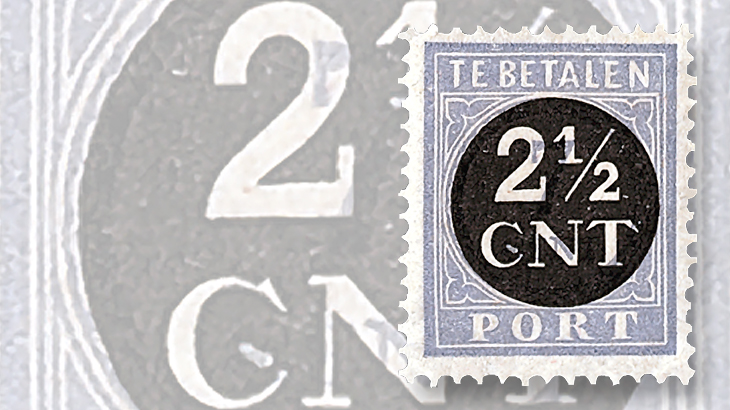 The Netherlands surcharged 1909 postage due issue was accomplished with a negative black circle and a positive white numeral. Identifying the original stamp’s denomination of 7¢ requires a careful second look. 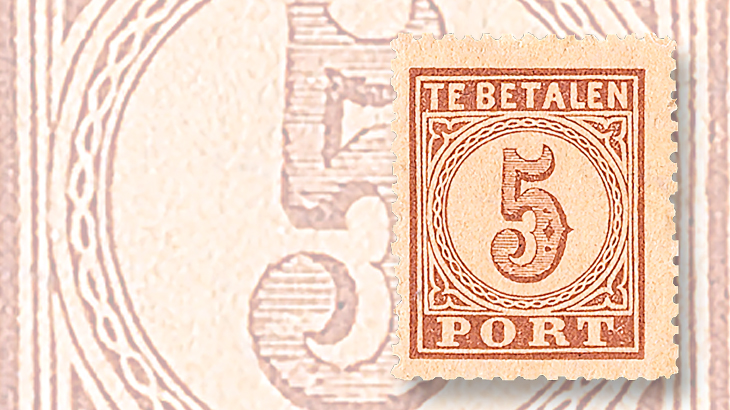 The Netherlands issued its first postage due stamp May 15, 1870, and like all such issues, it was used to indicate a deficiency in the postage paid on a piece of mail. 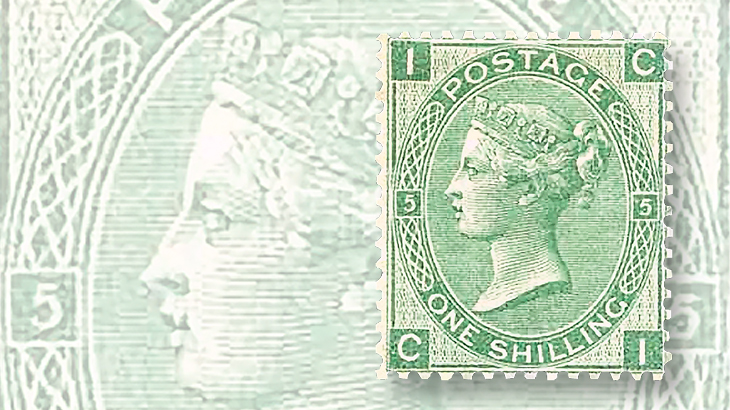 In common with other stamps of the period in Great Britain, this 1867 1-shilling Queen Victoria has printing plate information “hidden” in the sides of the frame. Sharp-eyed collectors can reap rewards for stamps with desirable plate numbers.
Previous
Next

We acquire a stamp, we look at it long enough to find a place for it in our albums, and then we move on to the next stamp without giving a second glance to the stamp we just mounted.

Here is an example of something interesting that you might miss if you don’t pay close attention.

Shown here is a fairly common image of Alexander III of Russia, a design that appears on a 3-kopeck stamp of 1913, and that might lead you to quickly decide this is an example of that issue.

But look closely: This stamp is seemingly printed on cardstock, and looks as though it might have been clipped from a postcard. It wasn’t.

A quick flip of the stamp reveals printing on the reverse, in Russian Cyrillic, as shown nearby. It translates as, “Having circulation on par with silver subsidiary coins.”

In other words, this is a 1917 postage stamp, using the 1913 design, that was converted to paper currency.

The Scott Classic Specialized Catalogue of Stamps and Covers 1840-1940 lists this stamp on thin cardboard without gum and without a surcharge (Scott 141), with 1k and 2k stamps issued at the same time with a surcharge (139 and 140).

(The 3k stamp shown here is listed in the Standard Catalog of World Paper Money General Issues 1368-1960, also known as the Pick catalog, after the inventor of its numbering system, as Russia 34.)

There was a 1915 type of Russia postage stamp that also was issued as paper currency. The World War I period, between 1915 and 1917, was tumultuous for the Russian economy.

Everyday necessities — food, clothing, shelter and fuel — were in short supply. The monetary system failed, and the ruble was practically worthless.

Currency disappeared, and stamps were used to mitigate the currency shortage.

The stamps were not intended to be used as postage, but they were, and these curious issues deserve a second glance.

You also might do a double take if you come across some postage due stamps from the Netherlands.

In 1870, the Netherlands issued its first postage due stamp.

The attractive but functional stamp (Scott J1) plainly indicated how much money was due to remedy the postage deficit on a piece of mail.

Over the years, most of the Netherlands’ postage due stamps were simply surcharged to keep up with postal rate changes.

Not so simple were surcharges applied on four different denominations of postage due stamps and issued in 1923.

The Netherlands stamp pictured here was originally a 7¢ postage due stamp surcharged with a negative background that highlights the positive image of “2½ CNT” (Scott J73).

On closer inspection, the original denomination of 7¢ is partially visible, but only if you take the time for that closer look.

Unless you are a specialist in early Great Britain stamps, you might not have realized that some of these Victorian-era stamps have a tiny plate number “hiding” (though in plain sight for the sharp-eyed) within the stamp design.

If you look closely at the oval frame, you will spot the numeral “5” within a small square halfway down either side of the frame. That is the number of the printing plate that was used to produce the stamp.

Plus, because these stamps also have corner letters, you can quite easily determine the position of a stamp on the sheet of stamps.

Each horizontal row received a letter, going alphabetically from north to south.

A second letter marked the position within the row, again going alphabetically from left to right.

This 1sh Victoria stamp has a top-left corner letter of “I” and a corner letter ”C” on the right. “I” is the ninth letter of the alphabet, so the stamp was from row 9 on the sheet.

“C” is the third letter of the alphabet, so this stamp was the ninth stamp from the left in row 3.

Why should you care? Well, if you refer to a specialized catalog of Great Britain Queen Victoria stamps, you quickly learn that there can be big differences of value depending on the plate number.

Discovering details adds to the interest of your stamps, and how would you discover them without taking the time to give a stamp a second glance? A double take can easily make a stamp twice as interesting.