Chances are you're already a philatelist 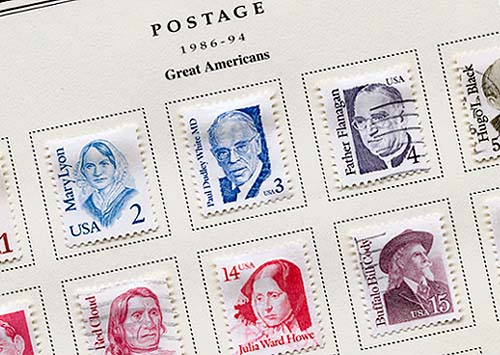 Many collectors start out by mounting stamps on album pages. Some branch out to other areas of the stamp hobby, while others enjoy the pleasure of the printed album.

What do you have to do to become a philatelist?

Do you have to take a test?Is there a big difference between a stamp collector and a philatelist?

The word "philatelist" is pronounced "fih-LAT-ul-ist."

The word comes from the same roots as the word "philately" (pronounced "fih-LAT-ul-ee"), which was created in the 1860s by a French stamp collector named Georges Herpin to describe the hobby of stamp collecting.

It is thought that root words for philately are "philo," meaning a love of something, and "ateleia," which means something that is not taxed.

Some collectors think that the word "philatelist" has come to mean a more advanced stamp collector.

It is actually more like a bank deciding to call its tellers "customer service representatives": It's just a different label.

Any stamp collector who has shown interest in learning more about the stamp hobby by reading Linn's Stamp News certainly deserves to think of himself as a philatelist if he wishes.

There are, of course, countless different ways that people who are interested in stamps begin collecting.

Someone who once spent time in American Samoa, for instance, may like to buy and keep some of the 33¢ American Samoa stamps when they are released in April.

If that same person starts looking a little more closely at other stamps from the United States or from countries around the world and decides to start saving different new stamps that he likes, then we have a stamp collector — or a philatelist — in the making.

A stamp collector goes a little farther than just buying stamps and storing them away. He also organizes his stamps and comes to think of his accumulation in a specific way.

Perhaps he's creating a collection of U.S. stamps or one of stamps showing birds, but he's starting to put his stamps together with some concept in mind.

A survey of Linn's readers taken a couple of years ago showed that nearly 70 percent save their stamps in regular printed albums.

Figure 1 shows part of a page from a Scott National postage stamp album.

Certainly a collector who has put forth the effort to organize his stamps on an album page can consider himself to be a philatelist.

For many collectors, the stamp hobby doesn't have to mean anything more than collecting stamps and filling the spaces on an album page.

For most folks this is a leisure-time hobby, a terrific way to relax and enjoy a little pleasant diversion.

One wonderful aspect of the stamp hobby is that a collector enjoying the very basic, very fulfilling process of creating a stamp collection in an album can add to it or take away from it in any way he sees fit, to make the hobby something he can enjoy on his own terms.

Some collectors are most interested in colorful commemorative stamps (such as the upcoming American Samoa stamp), and they don't care for common definitives (such as the 33¢ Flag Over City stamp), so they choose to collect the former and ignore the latter.

Other collectors are intrigued by the many stamp varieties that exist, or they become interested in the many ways that stamps are used and decide to begin collecting in ways beyond the printed album.

Studying how stamps are used is an area known as postal history.

For example, collectors might choose to collect the stamps of East Germany, or they may study how East German stamps were used to fulfill various postage rates during the time that country was in existence.

Here's a very basic explanation of how one might collect postal history with regard to postage rates.

Let's say a collector wants to show how U.S. overseas postage rates have been fulfilled over the years.

Shown in Figure 2 are three covers (in this case, envelopes rather than cards) that show postage rates to foreign countries (other than Canada and Mexico) during the period of July 9, 1995, to May 30, 1999.

The top cover pays the 60¢ rate for a letter of one-half ounce or less.

The second cover pays the $1 rate for a letter greater than one-half ounce but not more than 1 ounce.

The third cover pays the $1.40 rate for a letter greater than 1 ounce but not more than 1½ ounces.

Other options include doing a specific postal history study of a single stamp or a series of stamps.

The Great Americans stamps on the album page shown in Figure 1 could be collected fulfilling many different postage rates on covers. In fact, the third cover in Figure 2 shows four 10¢ Red Cloud stamps of 1987 making up 40¢ of the $1.40 postage rate.

Other collectors are more interested in the intricacies of the stamps themselves than in how they are used to carry the mail.

For these collectors, building a collection on album pages may lead to looking for varieties in the printing and processing of postage stamps.

There are, however, differences between the two stamps that will catch a collector's eye.

On the stamp on the top, the canoe is printed in brown, the paper is cream colored, and the letters of the nonprofit message are close together.

The canoe is red on the stamp on the bottom, the paper is bright white, and the nonprofit message lettering is more spread apart.

Because of these differences the two stamps are identified with separate numbers in most U.S. specialized stamp catalogs.

Collectors who begin to notice such differences may soon find themselves searching for more subtle differences. These can be differences in perforation gauge (or die-cut gauge on self-adhesive stamps), luminescent tagging, watermarks, ink color, and so on.

Whether a collector's interest is in filling the pages of a stamp album, looking for postal history, or searching out minute stamp varieties, he can be considered a philatelist.

The word "philatelist" is useful in that it includes the postal historian, where the term "stamp collector" seems to exclude the collector whose interest is covers rather than stamps alone.

In any case, all of these stamp hobby specialties are evidence of the many ways you can follow your favorite pursuits, making it possible to personalize the hobby to fit your own interests.