Figure 7. Whenever possible, revenue stamps on documents should be preserved intact to retain the history of their use.

Figure 5. State and local authorities have also increased their revenue with taxes on products and services. This ½¢ bottled beer tax stamp was issued by the state of Ohio. 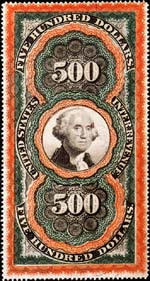 Figure 4. Some revenue stamps, such as this $500 documentary stamp issued by the United States in 1871, are highly valued rarities.

Figure 1. Among the earliest revenue stamps is this example from 18th-century Great Britain. The front is embossed, and the reverse is covered with a printed, engraved cypher stamp.
Previous
Next

A postage stamp can be characterized as an adhesive label, usually issued by a government office, signifying payment has been made for a specific service: the delivery of mail. A massive number of other adhesive labels have been created by countries around the world to denote payment to the government for other services, or for the payment of fees or taxes.

Alternately known as fiscal stamps or revenue stamps, these labels have a history and function every bit as fascinating and complex as their postage-stamp relatives. Revenue stamps certainly existed long before postage stamps. A.H. Aleck reported in the April 1982 Cinderella Philatelist that to help finance its war with France, the British government began taxing legal documents in June 1694.

A design was embossed directly upon paper documents to indicate the duty paid, while parchments had embossed labels affixed upon them with adhesive.

It was soon discovered that these early adhesive stamps were being improperly reused to avoid paying the tax, so the British stamp commissioners decreed in 1701 that subsequent stamps would include a bit of metal that would pierce the center of the stamp before embossing to secure it to the document, somewhat like a staple.

A printed label would be affixed to the reverse of the document to cover the attaching bit of metal and prevent any tampering with the secured revenue stamp. This second label is known as a cypher stamp, for it was imprinted with the Royal cypher of the reigning British monarch.

One of the earliest of these British revenue stamps is shown front and back in Figure 1. The front of the stamp is embossed, like most examples, on blue paper. The 6-penny fee is indicated at the bottom, below the crown-and-garter design. The cypher stamp on the reverse shows the insignia of George I, who reigned from 1714 to 1727.

The success of taxing documents inspired additional fees to help bolster the national treasury. Many other nations developed their own tax programs that included the use of revenue stamps. Revenue stamps from the United States, Mexico and Great Britain are shown together in Figure 2.

Some specialized catalogs exist that identify revenue stamps for selected countries or their subdivisions, but there really isn't one comprehensive catalog that covers the revenue stamps of the entire world.

The Scott catalog notes that the stamps on revenue stamped paper in the United States were embossed or printed on a wide variety of documents, including promissory notes, bills of exchange or lading, stock certificates, insurance policies, and receipts.

Figure 3 shows an 1876 example printed upon the business check of a grain dealer in Mount Joy, Pa. The lack of color contrast makes the stamp hard to see in the illustration. The orange 2¢ George Washington stamp on the bluish check paper is listed in the Scott U.S. specialized catalog as Scott RN-C1, with a size of 108 millimeters by 49mm.

The first U.S. revenue stamps were applied to everything from checks and bonds to playing cards.

Each stamp is inscribed with "U.S. Inter. Rev" (U.S. Internal Revenue) or a similar phrase. Because some revenue stamps, including the U.S. example shown at left in Figure 2, bear a resemblance to postage stamps, this identifying feature helps collectors distinguish the two.

Like postage stamps, revenue stamps range from very common to very rare (and very valuable). One of the most highly prized U.S. revenue stamps is the second issue $500 documentary of 1871, shown in Figure 4. Identified as Scott R133 and known as the large Persian Rug for its intricate design and distinctive orange, green and black colors, it is listed in the 2001 Scott catalog with a value of $12,500.

Taxes were applied to many different transactions over the years, including sales of beer beginning in the 1860s and wine 50 years later. Tax stamps were also created for transactions of tobacco, narcotics and other controlled substances. License fees for camping, motor vehicle use and hunting were documented with revenue stamps.

Revenue stamps for migratory bird hunting are still created and sold today to pay a license fee, creating the very popular collecting specialty of duck stamps. While federal duck stamps are currently issued under the auspices of the U.S. Department of the Interior, individual states also obtain revenue by printing annual duck stamps and requiring their purchase by hunters.

Duck stamps aren't the only revenue stamps created by states or municipalities. Over the years most states realized that the various ways the federal government accumulated revenues would also work on a local level. Figure 5, for example, shows a ½¢ Beer Tax stamp issued by the state of Ohio in 1935.

There are thousands upon thousands of different revenue stamps issued by various local governments, and like U.S. postage stamps, it is virtually impossible to collect them all. Most revenue stamp collectors look for one specialty area to collect and perhaps research, rather than spreading out into a massive collection that has no clear definition. A specialty area certainly can contain both federal and local revenue issues, such as the beer stamps that have been issued by both.

Another specialty area in the United States is the field of private die proprietary revenue stamps, also known as match and medicine issues. When the Revenue Act of 1862 was created, it allowed manufacturers of taxed products to design and create revenue stamps for their exclusive use.

Makers of matches, medicinal remedies, perfumes, canned fruit and playing cards were all eligible to create their own issues, and many did. Examples of two match and medicine stamps are illustrated in Figure 6. At left is a 1¢ issue from New York Match Co. (Scott RO136a), and at right is a 1¢ stamp from Vogeler, Meyer & Co. for its Dr. Bull's Family Medicines.

Just as postage stamps left on envelopes and postcards are evidence of postal history, revenue stamps that are saved on documents and even on products have much more meaning than individual stamps that have been removed.

Figure 7 shows U.S. future delivery tax stamps used to pay the tax on a trade of futures on the Chicago Board of Trade. In the July 8, 1985, issue of Linn's Stamp News, Richard Friedberg described the use of these stamps and told how the document illustrates that use.

Duck Stamps by Bob Dumaine appears in the issue dated the first week of each month.