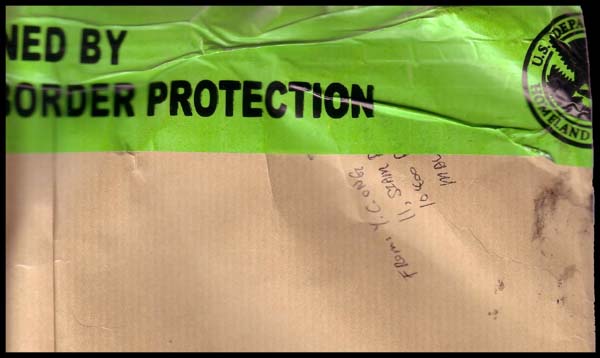 Figure 7. This envelope from Malaysia (shown cropped) was opened and resealed with green tape with the insignia of the U.S. Department of Homeland Security. The tape reads "Examined by [CUSTO]MS AND BORDER PROTECTION." Click on image to enlarge. 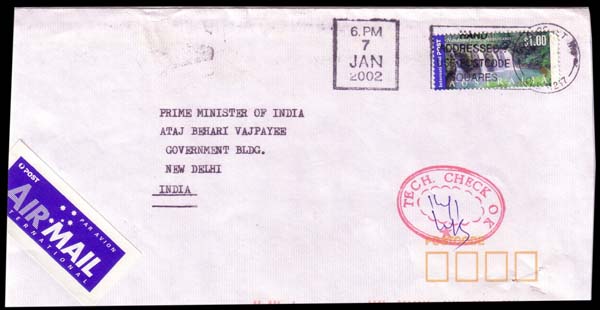 Figure 6. A cover sent in January 2002 from Australia to the prime minister of India. It bears a red handstamp that reads "TECH. CHECK OK." The marking, probably applied in India, indicates that the letter cleared screening for anthrax. Click on image to 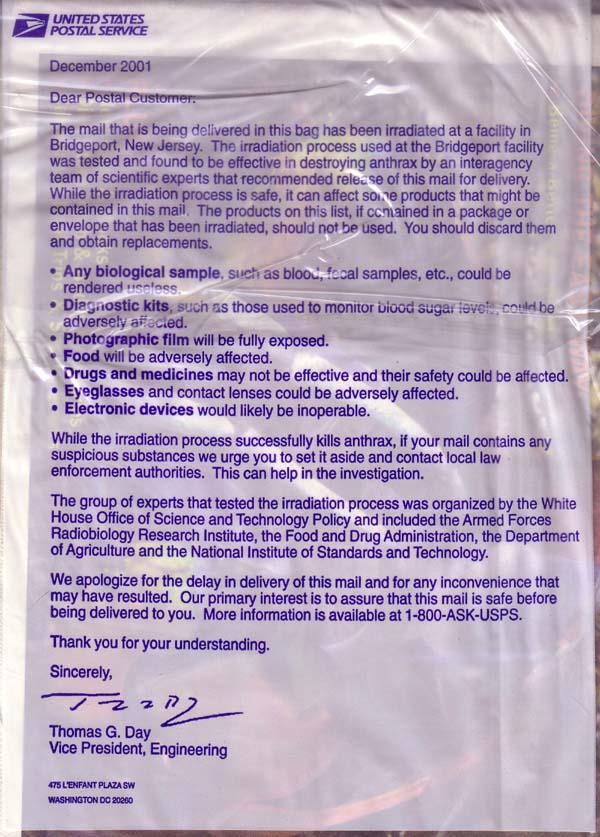 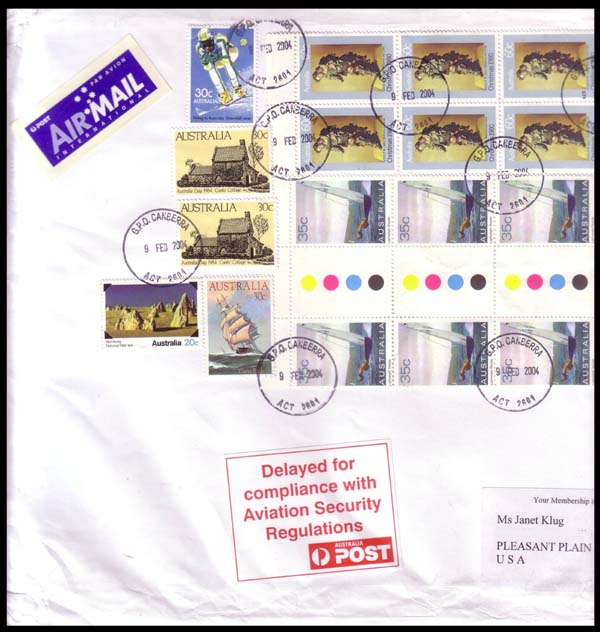 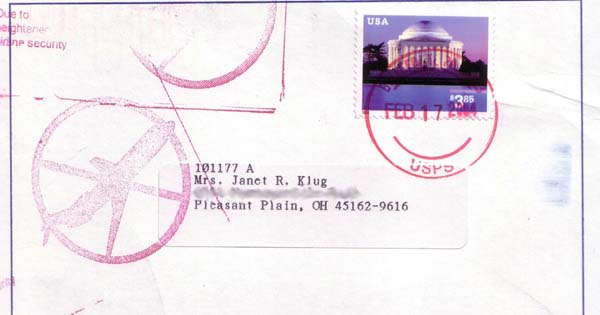 Figure 3. Part of a U.S. Priority Mail envelope mailed Feb. 17, 2004. It bears two strikes of a handstamp showing a plane inside a crossed circle and the text "SURFACE TRANSIT ONLY Due to heightened airline security." Click on image to enlarge.

Figure 2. A cover from a sailor mailed Aug. 29, 1945, to California from the USS Teton in Tokyo Bay, Japan. Click on image to enlarge.

Figure 1. A censored cover mailed Sept. 15, 1940, from Norwich, England, to the United States by surface mail. Click on image to enlarge.
Previous
Next

Extraordinary current events are often reflected in mail that ordinary folks send and receive. An event of importance might be mentioned in a letter, which in turn gives insight to the impact and effects the event had on the sender. Sometimes the covers (the envelopes and cards) themselves carry the evidence of historic events.

One such letter is illustrated in Figure 1. It was mailed from Norwich, England, on Sept. 15, 1940, about a year after Great Britain declared war on Germany. It was opened and examined by a censor before being sent by surface mail to the United States.

Its letter tells a poignant story of what life was like in the days of the Blitz, the German air raids on London during 1940-41. "I have taken a house for my wife and children in a less vulnerable spot of England, in a district where there would be no point in the enemy dropping bombs," the writer reports. "The London area is having a grueling time, and it is rather heart-rending to see some of the oldest treasures in jeopardy."

Letters document history. The cover shown in Figure 2 was sent from a sailor on a U.S. Navy ship to an address in Suisun City, Calif. The postmark is the story, dated Aug. 29, 1945, Tokyo, Japan, on board the USS Teton, four days before the signing of the instrument of surrender aboard the USS Missouri on Sept. 2, and a couple of weeks after atomic bombs were dropped on Hiroshima and Nagasaki. USS Teton, an amphibious force flagship, was one of 200 Allied vessels that stood by in Tokyo Bay for the historic signing that ended World War II.

The Blitz and Pearl Harbor happened 60 or more years ago, and undoubtedly some would say they are not modern. In fact, I have heard some collectors say that there is no modern postal history worth collecting, but I dispute that.

Few will forget the events of Sept. 11, 2001, which turned out to be another of those dates "that will live in infamy." The attacks on the World Trade Center and the Pentagon resulted in drastic changes for both air passengers and cargo. Parcels carried on aircraft were subjected to more stringent regulations and screenings for explosives. These regulations are still in effect and still evolving.

Shown graphically cropped in Figure 3 is part of a United States Priority Mail envelope postmarked Feb. 17, 2004. It bears two strikes of a handstamp that shows a plane within a crossed circle and the text "SURFACE TRANSIT ONLY Due to heightened airline security."

In years past, it was believed that diseases such as yellow fever, cholera and bubonic plague could be transmitted in the mail. During epidemics, postal services the world over treated mail by perforating covers with holes or by clipping corners from the envelopes so sulfur dioxide or formaldehyde vapors could be blown into them.

It was later proved that these diseases were not spread through the post, but shortly after the Sept. 11 attacks, anthrax spores were intentionally placed in letters addressed to government and media offices.

The accompanying handwritten letters seemed to connect the anthrax to the Sept. 11 attacks, but to date the origin is an unsolved mystery. Nevertheless, anthrax letters were responsible for five deaths and 17 other victims who became ill.

With the anthrax, the U.S. Postal Service had a major problem that required immediate attention. The Brentwood (Washington, D.C.) and Trenton, N.J., mail-processing facilities required major decontamination and renovation. Employees' health had to be monitored, and the safety of the mails had to be restored.

Three anthrax-contaminated letters were traced to the Trenton facility in Hamilton Township, N.J. This facility was closed Oct. 18, 2001, for decontamination. Contaminated mail from the facility was transported to an irradiation center in Bridgeport, N.J., 80 miles to the south.

Contaminated mail was zapped with radiation to kill the anthrax spores. Unfortunately, irradiation damaged some contents. Once the irradiation process was complete, each piece of mail was sealed in what is known as an "ambulance bag" or "body bag" containing an explanation about the radiation.

Anthrax was not just a concern of the United States. Other countries also implemented measures to guard against mail contaminated with anthrax or other bioterror agents.

Figure 6 shows a cover sent in January 2002 from Australia to the prime minister of India. A red handstamp is struck on the right side of the cover below the postage stamps. It reads "TECH. CHECK OK," and it is initialed in pen. The marking, probably applied in India, indicates that the letter cleared screening for anthrax.

In April, I received an auction lot purchased from an eBay vendor in Malaysia. The envelope, shown graphically cropped in Figure 7, had been opened and resealed with bright green resealing tape that reads "Examined by [CUSTO]MS AND BORDER PROTECTION." The tape bears the insignia of the U.S. Department of Homeland Security.

The cover that it arrived in was actually far more interesting than the contents. I wonder how much mail gets this treatment. I suspect that the lack of a customs declaration caused this package to be opened and examined.

Modern postal history happens every day. It is an important record that reflects social history and serves to document the way events shape the lives of ordinary people. Today's current events are tomorrow's history.