Covers can be fascinating 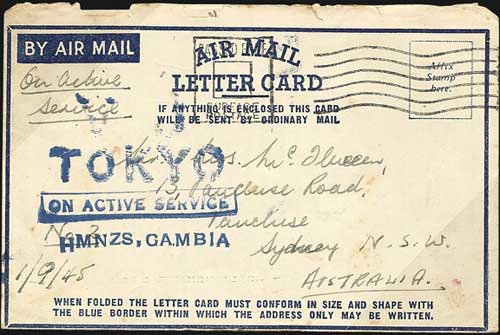 Figure 1. An airletter card mailed aboard HMNZS Gambia (48), a cruiser in the Royal New Zealand Navy, in Tokyo Bay on the day before Japan's formal surrender at the end of World War II.
Previous
Next

The stamps and covers we collect have compelling ways of telling history. Letters can document the day-to-day normal activities of individuals and thus provide snapshots of bygone times.

In writing to friends and family, their letters become more than just correspondence. They become primary source documents of historical significance. We who collect these things may own important eyewitness accounts unknown to professional historians.Ordinary people frequently get caught up in amazing historical events. Perhaps they are witnesses to history. Perhaps they are history makers.

Illustrated in Figure 1 is one such document. From a philatelic standpoint, the airmail letter card is pretty interesting all on its own.

The airletter card is addressed to Australia with a date of "1/9/45" inscribed to the left of the address. That date is done in the British style with day, month and year, meaning Sept. 1, 1945, the day before the instrument of surrender was signed by representatives of the Japanese government on board the USS Missouri (BB 63) anchored in Tokyo Bay.

Within the airmail letter card is an extraordinary account of the last days of World War II.

The cruiser was transferred to the Royal New Zealand Navy on Sept. 22, 1943, where it became HMNZS Gambia (48).

Assigned to the Fourth Cruiser Squadron of the British Pacific Fleet based in Ceylon,HMNZS Gambia supported carrier raids and was in action off Okinawa and Formosa.

The letter is contained within the airmail letter card. It was written by Warrant Shipwright George Wilcox and tells of the HMNZS Gambia's actions taken during the final days of WWII.

The letter picks up from Aug. 10, 1945, when the ship was given "unofficial news that Japan had accepted the terms of the Potsdam ultimation (sic) with reservations as regards the Emperor." The letter continues, "We could hardly keep away from the loudspeakers despite the fact that the Allies constantly repeated 'this surrender has not been received in official Allied quarters.' So the battle went on...sporadic attempts were made to attack the fleet but they were shot down or easily driven off. We continued our air strikes right until the morning of the 15th, when at about 11:30 a.m. the signal was hoisted on the flagship, 'Cease all hostilities against the Japanese.'

"Even while the cease fire signal was flying we were attacked by a suicide bomber – the first in several days. He came in fairly low with one of our fighters giving him all he had. They approached quite near to us, pieces of the Jap plane falling on our decks as he broke up overhead. He plunged into the sea some 200 yards ahead. Probably our closest call yet &bdash; and it had to be in peace time.

"We were part of the unit left behind to take part in the occupation of Japan.

"We anchored in...Saganin Wan. We stayed there three days and today we entered Tokyo Bay proper. The big day is tomorrow when the formal peace will be signed aboard the American battleship Missouri by Gen. MacArthur and the representatives of other nations."

HMNZS Gambia is credited with firing the last shots of WWII, and the cruiser represented New Zealand in Tokyo Bay on the day of the signing of the instrument of surrender.

The letter was then forwarded to Lexington, Mass., and has an Oct. 17, 1940, Cambridge, Mass., receiving postmark on the back.

The cover contains a letter. It is necessary to understand the conditions in Great Britain when the letter was written.

Many Americans forget that WWII was raging in Europe and elsewhere long before the United States entered the war after the attack on Pearl Harbor on Dec. 7, 1941. Great Britain declared war on Germany on Sept. 3, 1939, after the German invasion of Poland on Sept. 1.

By the time this letter was written, Germany's Luftwaffe had initiated the massive bombing attacks against Britain known as the Blitz.

The attacks focused on London and other major industrial cities and population centers in Great Britain. More than 43,000 civilians were killed and more than 51,000 were wounded. Many men sent their families away to safer havens.

The letter enclosed in the Figure 2 cover was written by Eric Machintosh to his friend Philip Clark in the United States, who had obviously invited Eric's family to come to America where they would be safe. Eric's poignant reply was: "It was indeed very thoughtful of you to cable...telling us that your kind invitation was still open, and in view of the intensification of aerial activity over here your offer becomes, if possible, even more tempting than before. At the same time the crossing has, of course, become more hazardous, and having known personally someone whose children were in a ship torpedoed in mid-Atlantic, it naturally rather makes one hesitate.

"I have taken a house for my wife and children in a less vulnerable spot of England and they are very comfortably fixed up there now with everything, including suitable schools, etc.

"It is in a district where there would be no point in the enemy dropping bombs and whilst no acre of our country is safe from the raiding, I feel that the amount of risk to which they are now exposed is not unduly great, and after discussing your kind cable with my wife, we decided that it was probably best to continue now with the plans we have made."

The letter concludes with this: "The prospects of the coming winter are not particularly joyful but we are all still full of confidence that eventually we shall see it through. Our confidence is in no small measure due to the encouragement, sympathy and practical assistance that we are receiving from your country, whose outlook and ideals are so close to our own."

Never underestimate the historic value of the letters you have in your collection. As primary documents, they provide a record of history better than most textbooks.