Arizona postmark celebrates when Tucson was named the capital 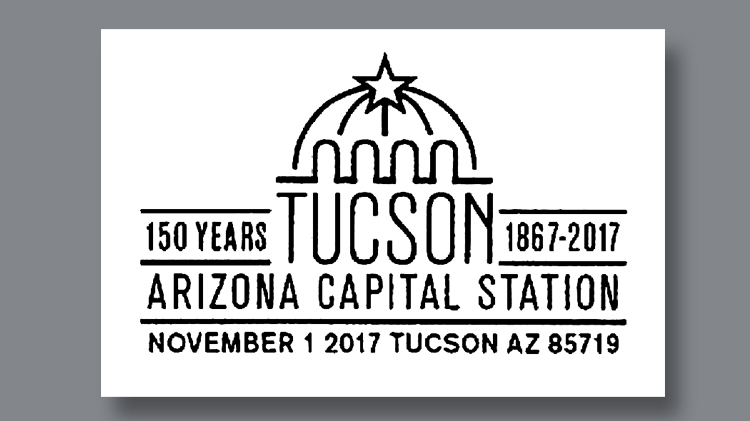 The city of Phoenix has been the capital of Arizona since 1889, long before the territory became the nation’s 48th state on Feb. 14, 1912.

But other locations had served as the capital of the U.S. territory before Phoenix was finally chosen, including Fort Whipple and Prescott.

In 1867, the territorial capital moved to Tucson, where it remained for 10 years, according to research by the Pima County Public Library.

The Arizona Superior Court notes that soon after the capital was established in Tucson, “it was clear that the town needed a permanent courthouse, as county and territorial business was being conducted in a pair of rented rooms.”

To commemorate 150 years since Tucson began serving as Arizona’s capital, the Postal History Foundation in Tucson sponsored a pictorial cancel.

To obtain the Tucson postmark, address your request to:

The Postal Service has also announced an addition to its Postmark America program, which features “graphics related to a theme or image that pertains to a specific tourist location, town or region.” These postmarks are available any day at the participating post office, and by mail.