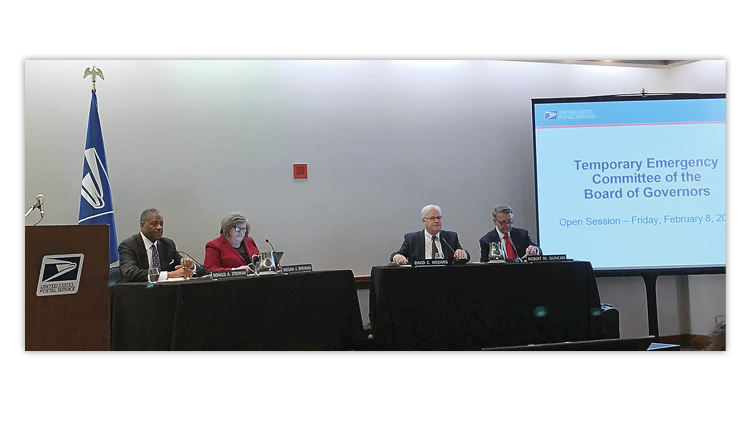 The financial results were revealed in Columbus, Ohio, during a public meeting of the temporary emergency committee of the Postal Service board of governors.

With its annual holiday mailings, the first quarter of the fiscal year is traditionally the most profitable for the Postal Service. However, this year another factor contributed to the financial setback.

“There was a non-cash uncontrollable workers comp adjustment of $500 million in the first quarter of this year,” said Joseph Corbett, USPS chief financial officer and executive vice president.

Eliminating that loss would have tempered the overall loss, reducing it to $1 billion, Corbett explained.

Total revenue for the agency was up 2.9 percent for the quarter, reaching $19.7 billion.

But an $81 million fall in first-class mail revenue coupled with an increase in total operating expenses of $1.6 billion (7.9 percent) compared to the same quarter last year undermined the boost in overall revenues.

Another factor contributing to the larger loss, according to Corbett, was the 2016 revocation of the exigent price increase.

The Postal Service received approval for an emergency increase in first-class letter and postcard mail that went into effect Jan. 26, 2014. The emergency measure expired April 10, 2016, and letter rates dropped by 2¢, despite requests from the Postal Service to allow the measure to continue.

Referring to a $100 million loss in controllable income cited in Corbett’s report, board chairman David C. Williams asked about the impact of losing the additional money generated from the stamp price increase.

“If we still had the exigent price increase, which we had for two and a half years until we were ordered to roll back our prices by the Postal Regulatory Commission; if we still had that, that was providing a few billion dollars a year in terms of revenue,” Corbett replied. “One quarter of that would have put us, in the controllable income line, in a positive state rather than a $100 million loss.”

“The Postal Service remains a fundamentally strong organization in terms of our mission and our role in the American economy and society,” Brennan said.

“However, we are not financially strong,” she added. “This reality is clearly reflected in the financial results this quarter. Without significant changes to our business model we cannot be profitable. Our revenues are not keeping pace with the rising costs of operating the business and meeting our obligations under the law, despite constant focus on generating new revenue and controlling costs.

“We are constrained by a price cap on the products that provide the majority of our revenue. And we are subject to inflationary pressures associated with the fixed cost of operating our extensive nationwide network, including the additional costs that we incur to reach more than a million new delivery points every year.

“In addition, we are subject to costly payment obligations concerning retirement benefits. Although we are a government entity, we derive all of our revenue from the sale of postal products and services, and we compete in the marketplace for every customer every day.

“Our nation is best served by a financially sustainable Postal Service, which can invest in its future and meet the evolving mailing and shipping needs of the American public.

“Our situation is serious, but solvable,” she said..