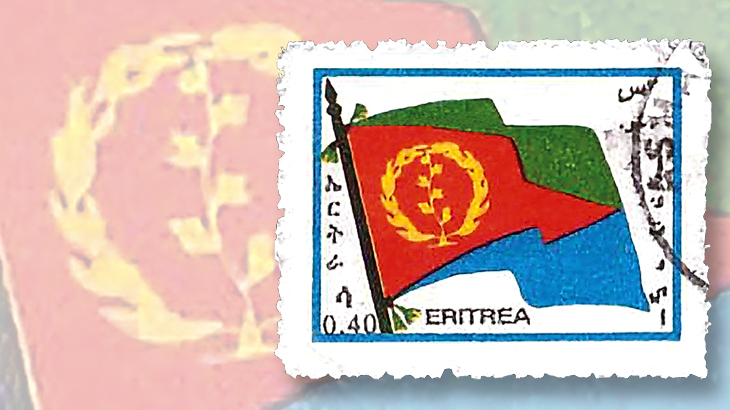 The 1994 set of nine Eritrean Flag of Eritrea stamps (Scott 211-219) is difficult to find and a good buy in mint never-hinged condition at the 2017 Scott Standard Postage Stamp Catalogue value.

Tip of The Week  — By Henry Gitner and Rick Miller

Eritrea lies on the Horn of Africa, bordering Djibouti, Ethiopia, Sudan, and the Red Sea. Eritrea was an Italian colony and, after World War II, a region of Ethiopia before gaining its independence in 1991.

The stamps of independent Eritrea do not enjoy a huge following in the United States. However, most of its earliest issues from 1991 to about 1995 are very difficult to find in the stamp market. The demand is relatively low, but the supply is even lower.

The 1994 set of nine Flag of Eritrea stamps (Scott 211-219) has appeal to flag topical collectors. The 2017 Scott Standard Postage Stamp Catalogue values the set at $58.50 in mint never-hinged condition.

The set is very similar to an earlier (1993) set of six Flag of Eritrea stamps (Scott 205-210). The border of all the stamps in the earlier set is blue, while the stamps issued in 1994 have different colored borders. This is a difficult set to find, and it would be a good buy at full Scott catalog value if you see it offered.