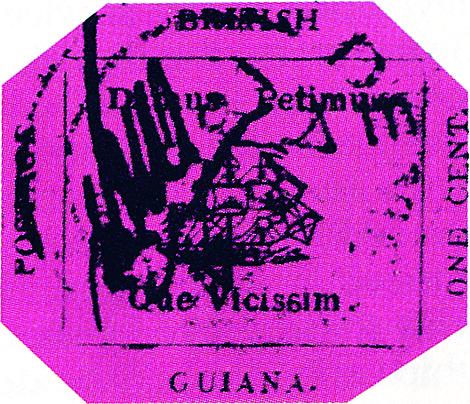 The iconic British Guiana 1856 1¢ Magenta last sold at auction in 1980 for a then-record $935,000. On June 17 in New York City, Sotheby’s will gavel the stamp down to a new owner. The London-based firm estimates that the famed stamp will sel

Last sold at auction in 1980, the world famous British Guiana 1856 1¢ Magenta will once again be gaveled down to a new owner.

Sotheby’s will sell the unique stamp in what the London-based auction house is calling a “dedicated auction” to be held June 17 at its galleries in New York City.

“No stamp is rarer than the sole-surviving example of the British Guiana One-Cent Magenta, a unique yet unassuming penny issue from 1856, and no stamp is more valuable: each of the three times it has been sold at auction, it has established a new record price for a single stamp.

“The British Guiana is equally notable for its legacy, having been rediscovered by a 12-year-old Scottish boy living in South America in 1873, and from there passing through some of the most important stamp collections ever assembled.”

The “12-year-old Scottish boy” who found the stamp was L. Vernon Vaughan. He subsequently sold it to another collector in British Guiana for a few shillings.

In 1852, 21 years before Vaughan found the 1¢ Magenta among his family’s personal papers, British Guiana started receiving stamps that had been printed in England.

Four years later, in 1856, as fate would have it, a shipment of stamps was delayed.

To avoid holdups in mail service, the postmaster in British Guiana enlisted the assistance of the local printer that produced the Royal Gazette newspaper.

From that temporary arrangement came a trio of stamps: the 1¢ Magenta, a 4¢ stamp also printed on magenta paper, and a 4¢ stamp printed on blue paper.

Over the years, the 1¢ Magenta passed through the collections of Thomas Ridpath, Count Philippe Ferrari, Arthur Hind, Frederick Small and a consortium of buyers headed by Irwin Weinberg.

Millionaire John E. du Pont, the heir to the du Pont chemical fortune who died in a Pennsylvania prison Dec. 9, 2010, was the last outright owner of what stamp collectors and specialists acknowledge as the world’s most valuable postage stamp.

The stamp has been hidden from view for almost 30 years. It was last exhibited publicly in 1986 at the Ameripex international stamp exhibition in Chicago.

To build interest for the June auction, Sotheby’s said that it is planning to showcase the stamp at various locations “including London and Hong Kong, before returning to New York for exhibition in Sotheby’s York Avenue galleries.”

Sotheby’s said the stamp will be on exhibit at its New York galleries starting June 14, three days before what almost certainly will be a historic sale in the annals of philately.

Unique is an apt description for the otherwise unassuming stamp, for just one genuine used example exists.

That status has been called into question during the past 25 years, because a second stamp thought to be an 1856 1¢ magenta surfaced in the late 1980s.

In 1989, the Royal Philatelic Society London determined that the contender was a 4¢ magenta stamp (Scott 14) that had been manipulated to look like the famed 1¢ stamp (Scott 13).

A decade later, the 1¢ contender once again was in the news, but the outcome was the same: The RPSL declared that the stamp was a fake.