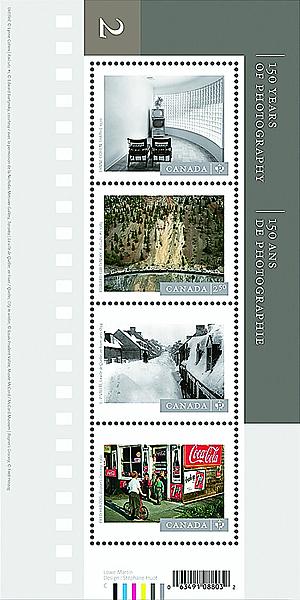 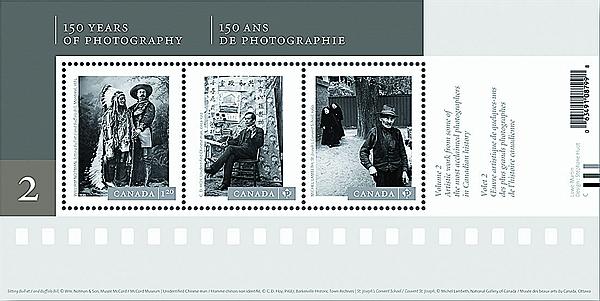 Canada Post will continue its series of commemorative stamps honoring Canadian photography July 7 with seven designs on stamps in booklets and souvenir sheets.

The five domestic letter-rate stamps are being issued in a booklet of 10, with two stamps of each design. The $1.20 and $2.50 stamps will be sold in separate booklets of six.

All of the booklet stamps are self-adhesive.

Two souvenir sheets with moisture-activated adhesive will be issued and are pictured with this report.

The Canadian Photography stamps pictured with this article are Canada Post publicity images.

The $1.20 stamp shows the photo Sitting Bull and Buffalo Bill by William Notman.

A photo Railcuts #1, CN Track by Edward Burtynsky is shown on the $2.50 international rate stamp.

The new Canadian Photography stamps are part of a series that started in 2013 with seven stamps (Scott 2626-2634).

According to Canada Post, the series will have a five-year duration, with three more sets planned.

Thirty-five prominent Canadian photographers will be honored in the series.

The Canadian Photography booklet of 10 permanent rate stamps, the booklet of six $2.50 stamps and the souvenir sheet of four were printed by Lowe-Martin using six-color offset lithography.

The $1.20 stamp booklet of six and the souvenir sheet of three were printed via three-color offset lithography.

All were printed on Tullis Russell paper with general tagging on all four sides. The self-adhesive stamps have serpentine die cuts. The souvenir sheet stamps are perforated about gauge 13.

The printing quantities are 2.3 million permanent stamps in booklets, 840,000 for each of the two international rate booklets of six, and 130,000 each of the two different souvenir sheets.

The set of seven international postal cards is item 262393 and sells for $15.

Canada Post will service 10,000 each of separate first-day covers for the two souvenir sheets. Both FDCs will be postmarked Ottawa, Ontario. The set of two FDCs is Canada Post item 403941144.