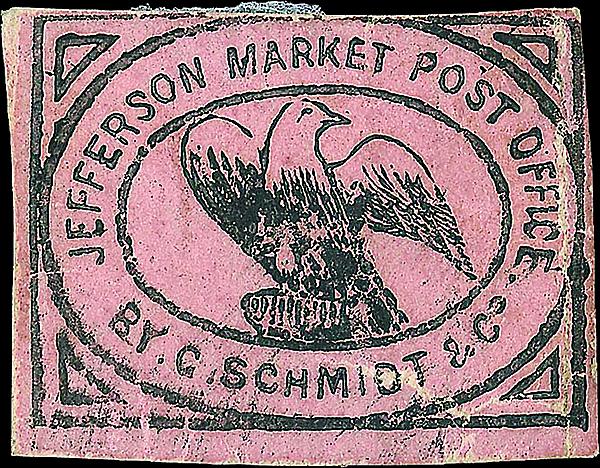 One of four known examples of the 1850 (2¢) Jefferson Market Post Office local stamp in black on pink paper (Scott 88L1) will be offered during the May 20-21 auction by Robert A. Siegel Auction Galleries of New York City.

Robert A. Siegel Auction Galleries will offer a wide range of United States postal history and Confederate States material during a public auction May 20-21 at the firm’s New York City location.

The local stamp offerings include one example of the 1850 (2¢) Jefferson Market Post Office stamp in black on pink paper (Scott 88L1). Siegel and the Scott Specialized Catalogue of United States Stamps and Covers both report that the four known examples of this New York City stamp are all unused. This stamp, offered in the upcoming sale with the Scott catalog value of $9,750, is described as having three full-to-large margins and no gum.

Hahn (1927-2004) was a respected expert of the prestamp era of U.S. philately. He received the American Philatelic Society’s Luff Award for distinguished philatelic research in 2000. In the society’s biography of Hahn for the APS hall of fame, his collection of New York State stampless covers is described as probably the greatest ever amassed.

One example from this extensive collection is an attractive folded letter from New York City carried by steamboat contract route to Albany, with 1815 docketed date, a large red manuscript “B” applied at Albany and “25½¢,” which Siegel identifies as the War of 1812 surcharge rate. Hahn noted the cover as the earliest use of the Albany “B” manuscript marking. It is offered with an estimate of $200 to $300.

The Confederate material on offer includes a large number of complete covers, with blockade-run mail, patriotics, provisionals and general-issue covers.

One standout is an example of the Confederate 1862 10¢ rose Thomas Jefferson (Scott 5) with large margins, including full corner sheet margins, on a small prisoner of war cover from Salisbury, N.C., to Gray, Maine.

The cover is endorsed “From a prisoner of war,” the stamp is tied with the Salisbury postmark, and the envelope, additionally marked “Due 3” for unpaid U.S. postage, is offered with the original letter enclosure from Maj. Daniel M. Dill to his father. The lot is offered with an estimate of $4,000 to $5,000.

Full details of the Siegel sale, including online bidding, can be obtained at www.siegelauctions.com; or by writing to Robert A. Siegel Auction Galleries, 60 E. 56th Street, New York, NY 10022.