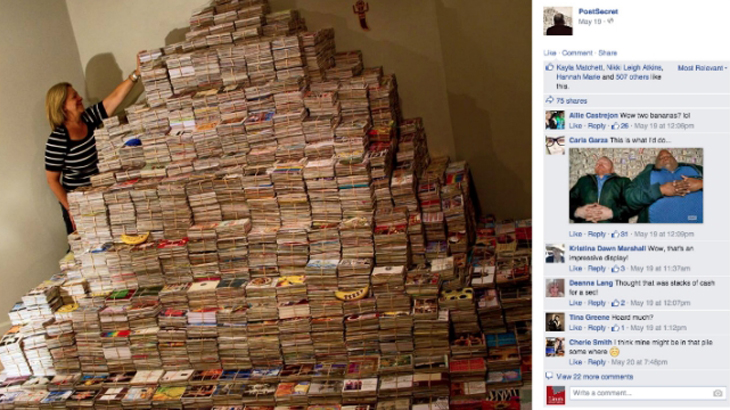 The National Postal Museum opened an exhibition Monday based on the postcards collected by PostSecret.

Remember all those anonymous, secret-filled postcards that were sent to Frank Warren and showcased on his PostSecret website?

Well, they're now being showcased at the Smithsonian's National Postal Musuem in its new exhibition, "PostSecret: The Power of a Postcard."

"More than 500 artfully decorated postcards mailed anonymously from around the world reveal regret, fear, betrayal, desire, confession, childhood humiliation and other compelling confessions," a blog post on the museum's website reads. "From taboos to confessions of hidden acts of kindness and shocking habits and fears, the display shares deep secrets by individuals seeking a safe and anonymous space to share untold stories. A pyramid of more than one-quarter million stacked cards is also on display, representing the magnitude and popularity of sharing secrets via postcards."

Read more about the exhibition.

The date and location of the first-day ceremony for the forever stamp honoring actor Paul Newman has been announced.

Read when and where it will be.

The latest crop of Scott numbers are in. See which stamps they're for.

"Quite a few beer stamps have been issued by countries around the world, especially those countries noted for brewing."