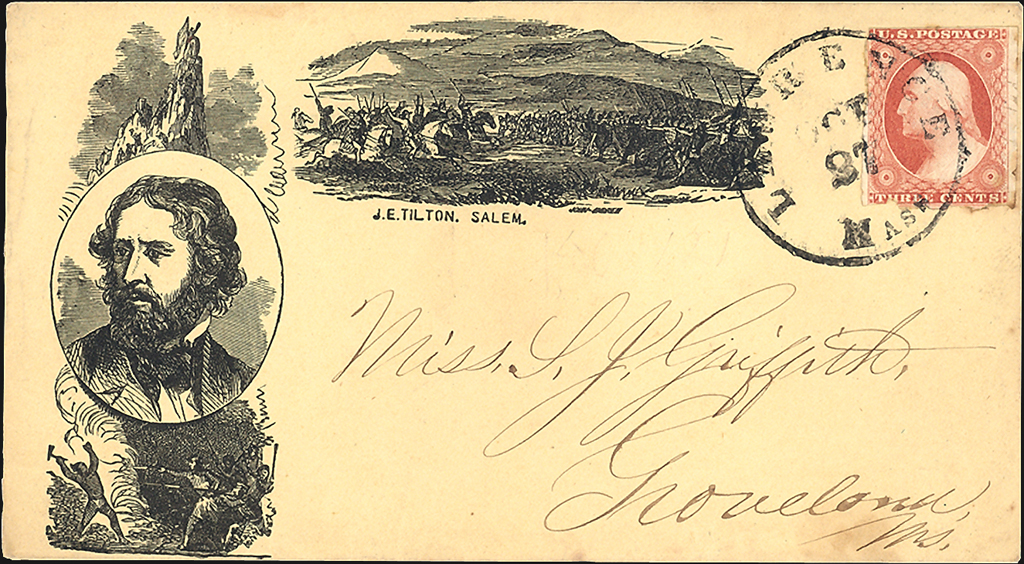 An 1856 cover for the John C. Fremont presidential campaign is among the many stamp and postal history offerings included in the Sept. 2 James T. McCusker public auction.

The Sept. 2 public auction by James T. McCusker will take place at 10 a.m. at the McCusker auction gallery, 804 Broadway in Raynham, Mass.

The covers on offer include a range of U.S. stampless covers, with some originating from Indian territory. Other offerings include fancy cancels; waterways, maritime and railroad covers; advertising covers; postal history by state; and a selection of Civil War-era material.

From the last group comes an appealing 1856 campaign cover for John C. Fremont, one of two similar covers in the McCusker auction. This example is franked with the 3¢ George Washington stamp (Scott 11) tied by a neatly struck Oct. 27 Lawrence, Mass., circular datestamp.

The bipanel illustrated cover shows a left-facing portrait of Fremont at left, with battle scenes at lower left and across the top of the envelope. The name “J.E. Tilton, Salem” is printed below the upper illustration. Tilton was a publisher of engravings and lithographs in Salem, Mass.

As an explorer of the American West, Fremont had come to be known as “the Pathfinder.” He served briefly in the U.S. Senate, and in 1856 became the first presidential candidate to represent the Republican Party.

The second Fremont cover, offered as a separate lot, is mailed from Wilmington, Vt., also in 1856, and also is franked with Scott 11.

There are also some nice usages of the 10¢ ultramarine registration stamp of 1911 (Scott F1) in this auction, as well as mail from Shanghai franked with stamps of the U.S. postal agency in China.

From 1945 comes a postcard to Coloma, Calif., with a manuscript endorsement “Internee of War Postage Free,” and a return address of “Alien Internment Camp,” in Bismarck, N.D.

A purple boxed handstamp on the reverse of the card reads “Detained Alien Enemy Mail Examined,” according to McCusker. The Bismarck machine cancel is dated Nov. 19.

The cover has an estimated value of $150 to $250, at an opening bid of $70. The lot also includes a printed label for “War Relocation Authority,” according to the auction description.

The U.S. stamp selection includes classic issues, beginning with the 5¢ and 10¢ stamps of 1847, plus back-of-the-book stamps, interesting coil varieties and more.