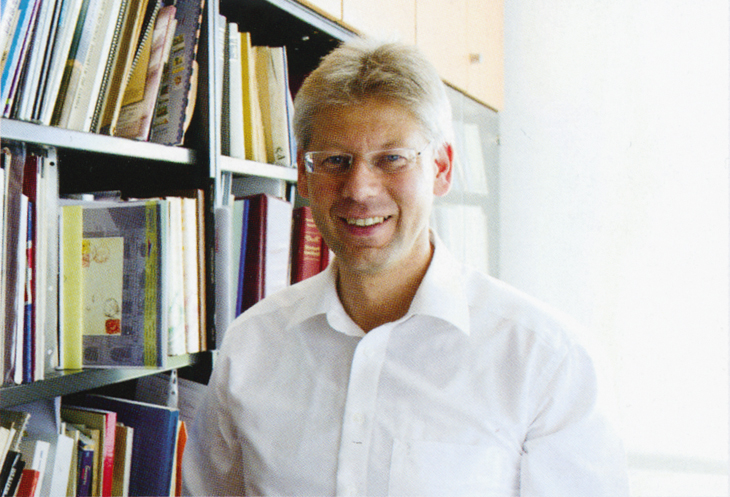 Christoph Gaertner is the head of the successful German auction firm that bears his name.

If there’s a secret to Christoph Gaertner’s success, it’s a simple one: He might be one of the hardest working people in the stamp business.

In just a few years, Gaertner has built his firm from scratch to the point where, three or four times a year, he conducts what is probably the world’s largest philatelic auction by volume.

The scope and breadth of the business is evident in some of the numbers touted by the firm: The catalog for the Oct. 19-27 sale by Auktionshaus Christoph Gaertner ran to a hefty 11 volumes, including — besides worldwide stamps and postal history — sections devoted to Asian philately, postcards, coins and medals.

Either on paper or as CD-ROMs, catalogs were mailed out to a customer base that includes 138,000 philatelists.

How did Gaertner, still sporting a youthful smile at age 50, reach this level of success in just a few short years?

He traces his lifelong passion for stamps to the moment when, as a 9-year-old, he was given a cigar box of stamps by his father. The box had belonged to an uncle who died in World War II.

“I was fascinated by their graphic design, their history and their value,” Gaertner recalled of that initial stamp trove in a recent interview.

Gaertner’s father had left the eastern part of Germany after the war and settled in Bietigheim-Bissingen, a small town north of Stuttgart. Christoph has remained there his entire life, and his firm is based there today.

He began dealing stamps at age 13 or 14. As a young collector trying to build up his exhibit of Germania-series postal stationery — the envelopes and wrappers issued by Germany from 1900-21 — he needed extra cash to pay for some coveted items.

In school, he would spend his free moments reading stamp catalogs to learn as much about the hobby as possible.

His Germania collection eventually won the ultimate accolade: Judges had a hard time believing it was a youth exhibit, Gaertner said.

Gaertner continued dealing in stamps while doing his required military service. His workday would last from 5:30 a.m. until 4:30 p.m. After that, he turned to running his mail-order business from 5 p.m. until midnight, dealing in coils, booklets and postal stationery.

His first trip to America was in 1986, to visit the Ameripex international stamp show in Chicago.

By 2006, sensing a shift in the marketplace, Gaertner gave up his retail practice and turned to auctions.

“The mentality shifted, thanks to eBay and the Internet” allowing customers to comparison shop, he said.

As the firm has prospered, it has expanded.

In 2015, Gaertner acquired the firm of Edgar Mohrmann, a reputable philatelic auction house dating to 1928, and Detlef Hilmer, a venerable stamp and postcard business headquartered in the Munich railway station.

Three years ago, Gaertner acquired the important reference collection and philatelic library of Peter Holcombe, the late expert, and this year he purchased the H.R. Harmer library.

Gaertner’s firm is a regular presence at North American stamp shows, always on the lookout for consignments, and will be one of the five featured auctioneers at World Stamp Show-NY 2016 from May 28 to June 4 at the Javits Convention Center in New York City.

Ten years ago, Gaertner married his wife, Regina, who is a recruiting consultant in the healthcare industry.

“She was the first woman I met who works more than I do,” he recounted with a laugh.

Together they have a daughter, age 8, who, alas, has yet to catch the stamp-collecting bug from her father.

Gaertner is sanguine about the future of philately.

“We cannot close our eyes. The numbers will decrease. The younger generation won’t fill the holes” left when older collectors put down their tongs.

Still, Gaertner remains optimistic enough to invest heavily in promoting stamp collecting, especially among young people. His firm hosts thematic exhibits and gives away almost as many stamps as it sells — 24 million during the last four years, with a catalog value of more than €15 million.

Many are bundled into boxes and sent to schools. More than 3,000 boxes, each containing 10 albums with more than 10,000 stamps, have been distributed through a program endorsed by one of Gaertner’s customers, the world-class chess player and philatelist Anatoly Karpov.

“I believe in stamps, otherwise I would not invest this way,” Gaertner says. “Stamps will always be collected and dealt.”