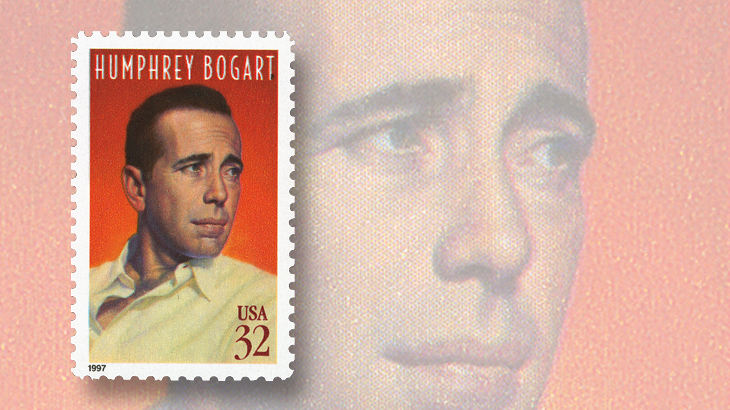 In 1997, Humphrey Bogart was commemorated on a 32¢ stamp in the Legends of Hollywood series.

Humphrey DeForest Bogart was born in New York, N.Y., on Dec. 25, 1899. His father was a surgeon, and his mother was a successful magazine illustrator and artist.

After a stint in the Navy during World War I, Bogart knocked about in the theater, accepting small parts but failing to gain much attention.

His earliest film roles, starting with The Dancing Town in 1928, did little to establish his fame.

It wasn’t until Bogart’s stage appearance as gangster Duke Mantee in The Petrified Forest, which led to his acclaimed screen performance in the same role, that Bogart’s true acting potential became widely known.

A Warner Bros. film contract eventually provided numerous outstanding Bogart appearances, including High Sierra and The Maltese Falcon in 1941, Casablanca in 1942, To Have and Have Not in 1944, The Big Sleep in 1946, and Key Largo and The Treasure of the Sierra Madre in 1948.

He was nominated but did not win an Academy Award for his portrayal of Rick Blaine in Casablanca, but in 1951 a second nomination for his role as steamer captain Charlie Allnut in The African Queen resulted in a win. A third nomination came for his role as Capt. Phillip Francis Queeg in The Caine Mutiny (1954).

When a forever stamp honoring director John Huston was issued in 2012 (Scott 4671), the design included a background image of Bogart holding the black falcon statuette in the film The Maltese Falcon, which Huston directed.